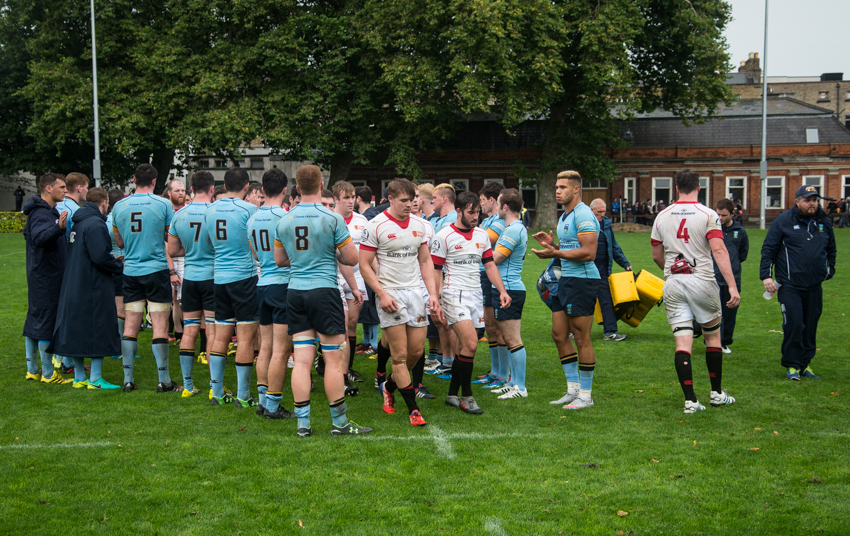 The constant drizzle didn’t deter a buoyant crowd of spectators from gathering on either side of College Park to watch one of the biggest matches in the Dublin University Football Club (DUFC) calendar. Unfortunately for the vocal home support, it was University College Dublin (UCD) who were much quicker out of traps and they took charge of the game early. Andrew Porter powered through tackles to turn the Trinity defence before Peadar Timmins arrived in support of the ball carrier to dot down almost in front of the posts for UCD. To go with their converted try, the side in their trademark light blue jerseys pulled one penalty just wide before scoring a second, leaving Trinity looking for a response.

Jack McDermott provided one when he got Trinity onto the scoreboard with a penalty of his own and at 10-3 one felt Trinity could and would play themselves back in the game as they settled. But the UCD pack had other ideas and proved as mobile as they were hard-hitting in shutting down Trinity breaks, with both props heavily involved. A scrum just outside the Trinity 22 proved too strong for the home side and although the UCD outhalf took an age over the resulting penalty, he made no mistake in slotting it between the posts. With the rain affecting players handling, this was one of those games where place kicking would prove decisive.

In a rare moment of back line brilliance Trinity replied with sharp, flat passing for runners, allowing them to vary their angle of attack and break the gain line. After several phases of this treatment UCD conceded a penalty out on the left again, with McDermott accurate with his effort. Inspired by this small success Trinity looked to attack through a running game again but a combination of huge hits on ball carriers from the UCD number 3, as well as a lack of precision in the pass, meant that Trinity were banging fruitlessly against a blue wall.

When UCD won a scrum inside Trinity’s half the wall was called into action again as the home pack spun around it and gave away a needless penalty, from which the Belfield outfit gratefully restored their ten-point margin before entering their halftime huddle.

As the second period got underway Trinity showed much greater variety in their attacks as the back line ran through their repertoire of moves, no doubt eager to put a dull first half display behind them. Long passes, short passes and the occasional kick from hands stretched the game more than we’d seen in the first half but an end product remained elusive. Whenever momentum looked like building, a crunching tackle would kill the move and UCD wing Adam Byrne revelled in putting in those challenges more than most. Great hands from Michael Courtney finally allowed Rowan Osborne – starting at scrum half today – to escape the attentions of Byrne down the touchline and the resulting period of pressure, featuring an almost inch perfect grubber kick, led to a Trinity penalty. McDermott stepped up to the ball way out on the wing. UCD encroached on his first effort, which went wide of the near post, so the referee ordered it be retaken. On the second time of asking he slotted it.

Then came the moment of the match. Hogan, playing fullback for Trinity, made a break out of absolutely nothing, chipping his man with an exquisite dink right out on the touchline and then giving chase. In a straight foot race between himself and Byrne, he left the pitch to get around the UCD wing before diving on the bouncing ball to score a sensational Trinity try. The conversion followed. The crowd roared its approval and the comeback was on. Trinity turned the screw from a lineout deep in the opposition half and then won a scrum. UCD felt their hands were deserting them at a crucial moment in the game, the score 16-13 in their favour with just ten minutes to play. A huge push from the pack and then Trinity had a penalty and more importantly, an opportunity to pull level in the closing stages. College park fell almost quiet. You could make out the chatter of tourists walking to and fro from the Lecky Library, oblivious to the import of on-pitch events.

The kick was pulled wide. The atmosphere deflated. UCD then took a crack from their own long-range penalty. Also wide. They would have the final say though. As Trinity threw men forward to find the equaliser, or even the winning score, Byrne made his mark on the counter. He danced inside a tackle off his wing and although his offload was ultimately dropped he had released the pressure on the UCD defense. After another massive carry from him, UCD were charging headlong for the Trinity try line, as backpedalling defenders desperately managed to spoil the break. This was only to be a temporary relief though. Several phases later and scrum half Jamie Glynn was able to dive over the line right by the post to kill the game. The conversion was a formality and UCD coach Bobby Byrne could be heard calling from the sideline to his players, demanding that they close the game out. They duly obliged and were applauded off the pitch 23-13 winners.