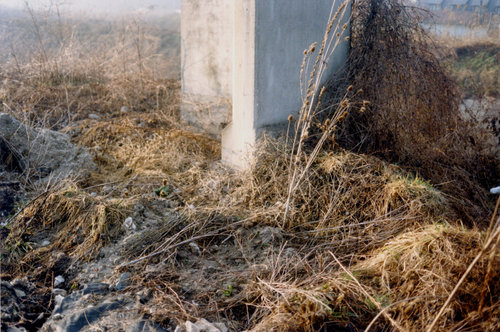 Irish photographer Samuel Laurence Cunnane presents a thought-provoking series of photographs this month at the Douglas Hyde Gallery. Graduating from IADT in 2011, Cunnane describes himself as a “documentarian”, and his work is heavily influenced by cinema. His photos display a keen eye for detail, capturing the unobserved moments of daily life.

Cunnane is a photographer who is connected to all aspects of the process of creating an image and is deeply concerned with the quality of the print. He speaks about “making” as opposed to taking pictures, and his photographs, C-type prints from 35mm film, are printed by hand. They are modestly-sized images and usually feature a soft, muted colour scheme. This attention to detail is echoed in the subject matter of his photos, which display an observant eye.

The photographs featured in this exhibition were taken on the artist’s travels through Hungary, Bosnia, Serbia, Croatia, Bulgaria, Istanbul and Iran. However, the location does not take centre stage in his work, and a clear location can usually not be distinguished. At first glance, the subject of many of these images may seem prosaic or obscure, with the setting often partially obscured. This, however, provokes the viewer to take a closer observation, resulting in the realisation that, while the subject is in fact quite ordinary, it has been presented from a new perspective by Cunnane as something that “will only exist in this moment”. Cunnane’s approach “reframes the familiar”, making us give greater consideration to scenes that would usually go unnoticed.

The small prints are hung in simple black frames on an irregularly spaced line in the gallery. The photos seem, at first, lost in the vast sea of white of the gallery wall, forcing the viewer to get up close with them, not unlike the way in which the subjects have been shot. This further accentuates the intimate nature of the image, connecting the practice of the photographer with the experience of the viewer.

The subjects in this collection are varied from portraits to views of nature and built environments. Portraits such as “Celia talks by the door” are somewhat direct and intimate while still maintaining a sense of distance between the viewer and the subject. These images are reflective of the influence of cinema on the artist, what he refers to as “witnessing a cinematic production of our lives”.

These intimate portraits are juxtaposed with images of the mundane, which Cunnane has a particular affinity for – the overlooked aspects of daily life which he uses as “props” for his images. These subjects are often initially difficult to distinguish, such as the two images “Shadows of plants inside a window” and “Legs”, unlabelled on the gallery wall, demand the viewer’s full attention. The abstract nature of such shots reinforces this idea of reframing the familiar and capturing a fleeting moment in time.

A beautiful collection of images that are tinged with a sense of the familiar and something obscure, Cunnane’s photographs are intriguing with a unique, delicate nature.

The exhibition is taking place in the Douglas Hyde Gallery until November 7th.