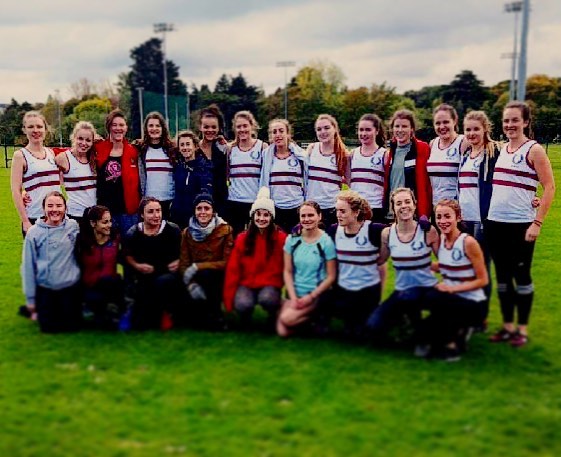 In what was a huge showing of depth, no fewer than eight women’s teams from Dublin University Harriers and Athletics Club (DUHAC) completed the traditional 1-2-2-1 mile circuits, with a further two groups of men contesting the equivalent 1-2-3-2-1 mile relay, a testament to the growing popularity of athletics in Trinity and the tireless recruiting of club captains Bláithín Sheil and Eoin McCullough who along with John Moroney, led a vocal contingent of travelling support on the day.

The women’s teams competed well in a busy season opener, with a fastest time of 33:16 being posted by the group of Cliona Murphy, Sorcha McAllister, Clare McCarthy and anchor, Caitlin Pearson, who ran bravely in a tight final mile, posting a time of 5:32.

Standout performers among the women included Ellen O’Hanlon who, as usual, produced a sterling performance with a 5:28 time in her mile – proving the fastest of the DUHAC women that day. Sorcha McAllister, meanwhile, offered the fastest two mile time at 10:38. Deirdre Nic Canna smashed her personal best for the two mile with a time of 11:41 in a day of heartening personal success.

The DUHAC men fell short in the later races, finishing with times of 47:16 for the A team and 49:14 for the Bs, finishing 2nd and 3rd respectively, behind the A team and above the B teams from UCD. They will be disappointed to finish so far behind the UCD A team, who finished with a time of 42:05 overall. Yet, despite the historic rivalry between the two colleges, this was clearly more of a practice opener to the season than a vital, must-win clash.

The lack of weighting in the Trinity teams and the fact that Alan Kelly ran two legs for two different teams spoke to the preparatory atmosphere on the day. Having already ran a team best 15:23 in the three mile for the B team, Kelly boldly anchored the final mile leg for the A group despite prior concerns over the durability of his hamstring. Elsewhere, Rory Owens and Chris Doherty posted impressive times of 5:03 in running the joint-fastest miles for the men, while Jack Gilligan had the fastest two mile time at 10:09.

DUHAC members will be out in force this weekend for the Dublin marathon, with participation, whether through active racing or volunteering assistance, expected to be high among Trinity athletes both inside and outside the club.

This was a positive opening to the season, with eyes now firmly fixed on the upcoming varsity road relays on the 19th November, where the intensity of competition is expected to increase as Trinity’s athletes contend with the elite among the country’s universities. With introductions completed and many new names settled, training in Irishtown will continue with a stronger showing expected in the same race format at NUI Maynooth this time next month.