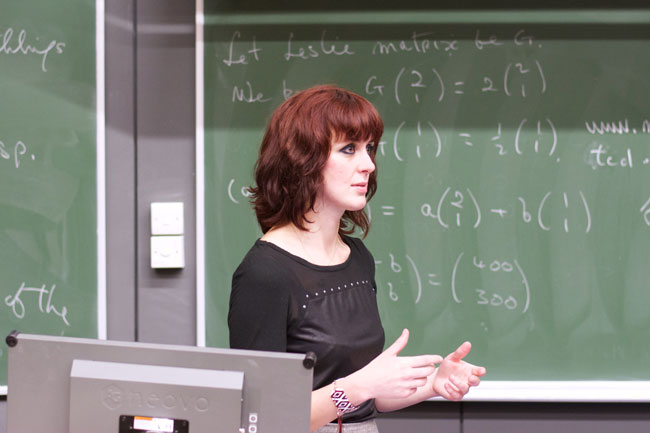 Melanie Lynch, founder and director of the feminist cultural and historical revival project Herstory, joined the Trinity Global Development Society, in association with DU History and DU Gender Equality Society (DUGES), yesterday to tell her story. The mission of the project is to tell the stories of Ireland’s lost heroines, the achievements of incredible women that have been written out of history and never told. In Lynch’s words: “History without Herstory is half the story.”

Lynch began the session by engaging with her career history and how she was inspired to start the project. Attending Trinity to study mathematics, Lynch emphasised how miserable she was as she tried to fit herself “into little boxes”, for she was a dreamer as a girl and ignored her creative side at college. Leaving college to pursue creative advertising, her career path lead her to renowned advertising agencies Bartle Bogle Hegarty in London and Saatchi’s in Paris. Here she developed the skills that would later be fundamental to the Herstory initiative, including how to pitch ideas for funding and how to seed and strategize long-term campaigns. Inspired by her time spent in Kenya living amongst native tribes on the edge of the Rift Valley, Lynch recognized the importance of maintaining a cultural history within communities, and telling the stories of past generations. This sparked the idea for the Herstory movement back home. As advice for those who may feel they cannot decide on a career path, Lynch would “highly recommend detours… take those wildcard options”.

After starting to dig up Irish women’s stories to bring to light, Lynch discovered the sheer amount of women who have done amazing things that nobody seems to know about. She mentioned Lady Mary Heath, the original Amelia Earhart, who was the first woman to fly across Africa; Agnes Clerke, an astronomer from Skibbereen; Gormlaith, three-time High Queen of Ireland; and Grace Gifford, who is cherished as the tragic bride of the 1916 Rising but was also a superb satirical cartoonist and revolutionary figure in her own right. Lynch stresses that these are the women of our national heritage and it is our responsibility to make sure their stories are told. Lynch asserted that the way we have been taught history has been unintentionally and subliminally excluding women, and by changing this we change the way women perceive their own identities and places in society.

Lynch proceeded to tell the audience about her three-year strategy to kick off the Herstory movement. The goal is to strike a balance between education and entertainment, creating a framework where Ireland inspires other countries to celebrate their own female heritage. The collaborators involved in the project are very impressive: The National Museum of Ireland, the Royal Irish Academy, Smock Alley Theatre, Culture Night, Body and Soul Festival, National College of Art and Design (NCAD) alumni and RTÉ, to name a few. When the Christmas lights go out on January 6th 2017, Lynch plans to light up the iconic buildings of Dublin with the faces of forgotten women, to get the city talking. Plans for a history book to supply to schools free of charge is underway, as well as a TV series and a teen magazine, of which the audience got a sneak peak of the first illustrated cover. It’s superbly drawn with hardly any pink – “end the pinkification of women!” cried Lynch.

Finally, Lynch asked the audience for their input on hosting an event in collaboration with Trinity to get students involved in the movement. The heads of DUGES and the Global Development Society are planning on working in collaboration with other societies on campus to organise a GMB takeover themed around the stories of Irish women at the beginning of the new year. Lynch said it will be fascinating how the movement unfolds itself. She declared that if Irish people are given a platform, they will rise to it spectacularly.