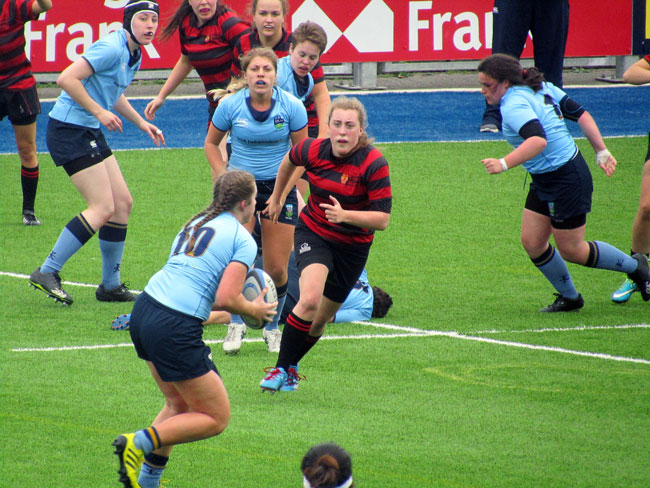 The opening fixture of the season saw Dublin University Football Club (DUFC) Women take on University College Dublin (UCD) today at Donnybrook Stadium. For Trinity, it represented their first match in the traditional heartland of Leinster Rugby and, sporadic drizzle aside, the conditions were excellent.

The opening exchanges proved to be a template for the rest of the match, as Trinity made great use of their ball carriers to take the game to UCD, but were let down by their passing. As a result, UCD controlled territory during this early passage of play and even when Trinity had the ball in hand they couldn’t clear their lines. An incisive run from Niamh Byrne, playing at outhalf today, provided a brief respite, but Trinity were living dangerously. They nearly paid the price twenty minutes in when UCD worked a huge overlap on the wing opposite the main stand but an excellent choke tackle prevented the final pass from finding it’s target. UCD then made another lunge for the try line but this time the ball was held up. So far, so dicey for Trinity.

The close escape served as an effective wake-up call though and after a Trinity clearing kick was knocked on, they earned some breathing room closer to the halfway line. UCD resumed their attempts to batter their way over the gain line but they were met with strong tackles and out of nothing, Trinity scrumhalf Kathryn Dane showed incredible speed and agility to cut through the smallest of gaps in the UCD line and threw the opposing defence into disarray. The offload nearly went astray but it was recycled to Byrne on the 22, who beat her marker and dotted down under the posts for a Trinity try. Dane did the honours from the spot and Trinity were up seven to nothing.

The speed at which the Trinity back line closed down their opposite numbers was impressive and suddenly it was UCD making the mistakes. Another sharp line break, this time by Alex Lynch at outside centre, was stopped just short of the try line and from the resulting penalty a Trinity forward crashed over the line for a second score. The conversion was a little closer to the wing this time and Dane’s effort fell short but Trinity were enjoying their best passage of play.

The end, when it came was abrupt. UCD turned the ball over in midfield and a cross-field kick caught the Trinity defence too static. It wasn’t that the kick was particularly well-executed, but the response was indecisive from a very flat back line and the UCD full-back showed great determination to win the bouncing ball and stormed clear to score under the posts. The conversion was a simple one, and UCD were back within a try before half time. There was lull in the action after the break but only because both sides were saving their energy for a frantic final twenty minutes.

It started when a misplaced pass bounced into UCD’s hands on the near touchline. Trinity had been attacking in full flow and with their full back high up the pitch they were suddenly exposed. UCD capitalised on the break and a smart offload saw the winger in for the equalising try. A poor attempted conversion followed, which was a let off for Trinity, and the game descended into a bruising physical encounter. UCD and their powerful inside centre knocked on the the door repeatedly and were met each time with last-ditch tackles. A stellar try-saving effort from Dane right up against the touchline was the standout moment.

Trinity then rallied impressively and with both sides running on adrenaline they showed the greater sharpness in their passing. Although it was a blow to lose Dane to injury, an excellent late surge from Byrne brought Trinity right the threshold of the UCD tryline. The game’s final moments were played out within metres of the posts as carries from forwards Molly Boyne and Maura Ford were stopped just short. Credit where it is due, UCD were well organised defensively but some sloppy passing prevented Trinity from finding that all important breakthrough. The ball was shepherded out to the far touchline and when the final whistle blew, Trinity probably felt disappointed with the draw. Certainly, some defensive lapses aside, this was a match they could very much have won.