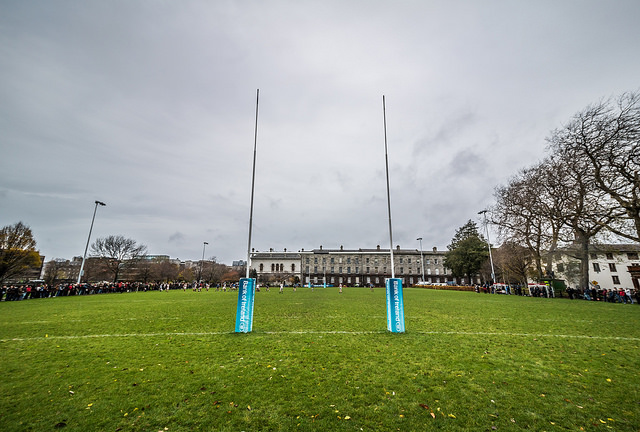 Saturday’s clash between Dublin University Football Club (DUFC), Trinity’s rugby team, and Cork Constitutional (Con), offered a striking precursor to Ireland’s clash with Australia for those in attendance at College Park. The result, however, was not to be in the home side’s favour, with Trinity losing 10-30.

The students kicked off, but Con had soon kicked clear through a John Poland box kick which would serve them well throughout the first half. They were soon on top, winning possession and quickly kicking into the Trinity 22, before claiming the line out and eventually earning a penalty. Tomas Quinlan, who starred for Con on the day, slotted it with ease from the tee. Cork repeated the trick off Trinity’s restart with Poland’s boot relieving pressure.

Trinity, however, eventually got a foothold in the game. Hands in the ruck from Cork gifted a penalty which was quickly taken by scrum-half Dan Joyce, who gained ground before offloading sweetly to Colm Hogan who ran for further yards. Cork soon surrendered a second penalty, allowing Trinity to kick for touch and seek an early try. This refusal to kick for points defined the game as the students imposed a positive style, kicking for the corner and quick tapping throughout the game in the search for tries.

Con eventually cleared after loose play from a second Trinity throw, however a second try chance soon came. Michael Courtney led a three on two opportunity down the wing but, in attempting to offload, dropped the ball forward on his way to ground. Cork however imposed their physicality on the younger side, making several powerful carries and consistently breaking the gain-line and demanding multiple tacklers, gaining fifty yards and a scrum in the process. Trinity’s Andy Keating was judged to have collapsed the scrum and Quinlan kicked between the posts again to take Cork’s lead to 6-0.

What followed however was DUFC’s most dangerous period of the match. Having won possession soon after the restart, the home side kicked for the corner off a penalty for the third time. This time however, the men had the cutting edge required to touch down. After a number of phases, the ball came out to left wing, Hogan, who rounded his defender, struggling passed him from close range before stretching along the ground to score right in the corner with a terrific finish. James Fennelly, deputising for the injured Jack McDermott, staked his claim for the permanent spot with a great conversion that dropped just over the bar to gift the home side the lead.

Trinity weren’t finished yet however, as scrappy play from Con soon after allowed Joyce to break free before offloading to Kelly, who showed his agility and power again to break past multiple tacklers before seemingly scoring by the posts. Unfortunately however, an impressive Con effort led to the ball being knocked free beyond the in goal area. A Cork penalty followed, allowing the visitors to break out, eventually winning a third penalty in virtually the same position as the previous two. Quinlan made no mistake, retaking a lead that Con would refuse to surrender for the rest of the contest.

Trinity’s period of pressure was not done however, as Jack Kelly had soon burst down the right, where he was finding significant joy, handing off a would-be tackler before eventually being brought to ground. Trinity were on the cusp again, yet Cork began to commit more players to the ruck, slowing down play considerably and preventing the backline from receiving the ball out wide to take advantage of their numbers advantage. Kelly and Hogan each made good ground on mini bursts, with Hogan being tackled just short of the line. An impatient crossfield attempt from Fennelly allowed Cork to regain possession just before halftime, the visitors kicking behind under significant pressure and grateful to have only conceded one try.

The Munster outfit, celebrating their 125th anniversary, emerged after half time a changed side. Having kicked off, Con immediately put pressure on the Trinity defence, winning the ball back and consistently driving forward with their rucks. Despite manful defence, Con’s prop, Liam O’Connor, eventually drove over to extend their lead to 16-7 after Quinlan kicked over the conversion.

Trinity struck back with a good phase of possession from kick off, yet despite reliable handling, the home side couldn’t convert phases into metres as the backline remained very flat and failed to gain the momentum necessary to provide a try threat. Poor Cork discipline, however, gifted DUFC a penalty, with the visitor’s second row earning a sin-binning in the process. This time the home side opted for points as Fennelly kicked well to bring his team within one score again.

The physicality of the encounter was evident for the rest of the game as a huge Trinity hit left Gavin Duffy and Graeme Lawlor of Cork agonising on the turf. With Lawlor off, it was Trinity’s turn to lose a player. Hogan, who’d been excellent on the day, slid a grubber kick into the visitors 22, forcing Con to run it out and suffering a grade two hamstring injury in the process.

Con rallied however, applying huge pressure for the rest of the game. A strong Con scrum earned a penalty, which Quinlan kicked deep. Poland proved key again as a jinking run brought the Cork outfit close. At the proximity Con found themselves to the try line, it was only a matter of time before they crashed over once more through their dominant pack. Kindregan, fresh off his spell in the bin, offered the key drive to break the plane.

A third try was added almost immediately after strong running and quick Cork hands brought them close once more. As the ball was delivered from the right, Niall Kenneally at inside centre made the difference, breaking through and scoring. Quinlan added both conversions to finish the day with 100 per cent goal kicking. The Trinity side, having proven so strong in previous weeks, had let the game disappear in a torrid five minute spell in an otherwise even encounter.

Tempers threatened to boil over near the end with a small fracas, after a second Con yellow for Gerard Sweeney and a huge, yet fair, hit left Michael Courtney panned out. Trinity pushed again from five yards out but a knock on ended the game at a disappointing 10-30 to the Munster side.