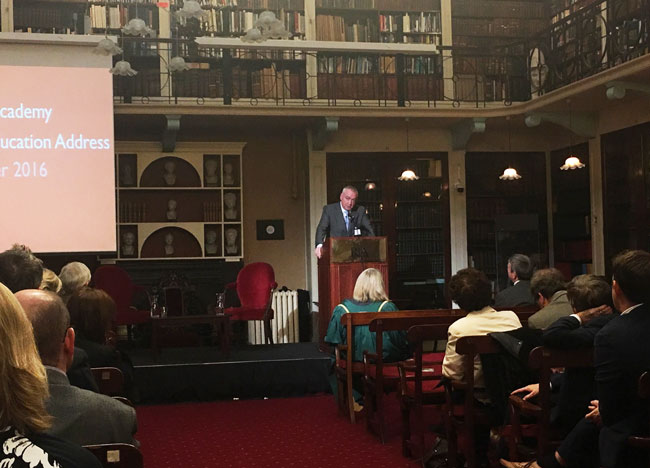 Former Head of the Higher Education Authority (HEA) Tom Boland tonight called for action from government and the leaders in higher education on reform of the embattled sector, in a wide-ranging talk that emphasised the value of third-level education while also acknowledging a “fractured” relationship between universities and government.

Boland, who stepped down from the HEA in August after 12 years as CEO, was speaking at the third annual “Leaders in Higher Education Address”, organised by the Royal Irish Academy.

Addressing a roomful of academics and members of the higher education sector including Provost Patrick Prendergast, Boland said it would be the “height of folly for us, in this vulnerable moment, not to act”. Pointing to today’s election of Donald Trump to US President, and the impact of Britain’s decision to leave the EU in June, Boland warned that the “growing disdain and disrespect for politics and politicians is leading to unprecedented fragmentation”.

“Universities have long played a central role in the development of societies”, Boland said, calling on Irish institutions to promote “humanitarian and democratic principles”.

Yet the talk also focused on the more particular problems facing higher education, mainly the dramatic decline in state funding the sector has received since 2011. The government, Boland said, “cannot or will not make decisions about how we sustainably fund higher education and research”.

Boland pointed to the relative protection afforded to other public sector staff, such as teachers, nurses and doctors, since the 2008 financial crisis. Accusing Irish governments of failing to “make the case for the sector”, Boland argued that instead “politicians routinely demand more efficiency and point to alleged extravagance”.

The issue of funding for Irish higher education institutions reached a head in July with the publication of the report by government’s higher education funding working group, chaired by Peter Cassells. The report, which outlined three options for funding the sector – the abolition of the student contribution and the creation of a predominantly state-funded system, the continuation of the current student contribution charge coupled with increased state investment, and the introduction of an income-contingent loan system – is now being considered by the Oireachtas Education and Skills Committee, chaired by Fiona O’Loughlin.

Commenting on the ongoing discussions surrounding the report, Boland said: “I wish the work of the education committee very well… but ultimately the issue demands political leadership and the expense of political capital”, he said.

The address comes as the heads of Irish universities, as well as a number of heads of institutes of technology, sit down tomorrow to discuss the report with the committee. Boland called on Irish universities to do “much more than they are currently doing to combat prejudice and ignorance by highlighting the massive influence they actually make”.

His talk, indeed, was not uncritical of the leadership of Irish universities. Pointing to the “distrust” between universities and the government, Boland said this relationship is often made worse by universities failing to build “the coalition of support” enjoyed by primary and secondary-level education.

Boland called for the need for a greater “strategic dialogue” between Irish institutions and the government, which would see a clearer discussion around which aims and government objectives universities would agree to pursue.

This “opportunity for better relationships”, Boland said, would “replace anecdote and prejudice” with clarity. He acknowledged, however, that a “sustainable system of funding the sector” would be required to achieve this.

Boland struck a more positive note than he had done this time last year, when he addressed the Royal Irish Academy in September during a forum on higher education funding. Then, he referred to the “managed decline” of a sector that was “gradually being pared back to a bare minimum”.

Tonight, however, he praised Ireland’s “high quality higher education and research system”, adding that “there is much to celebrate”.