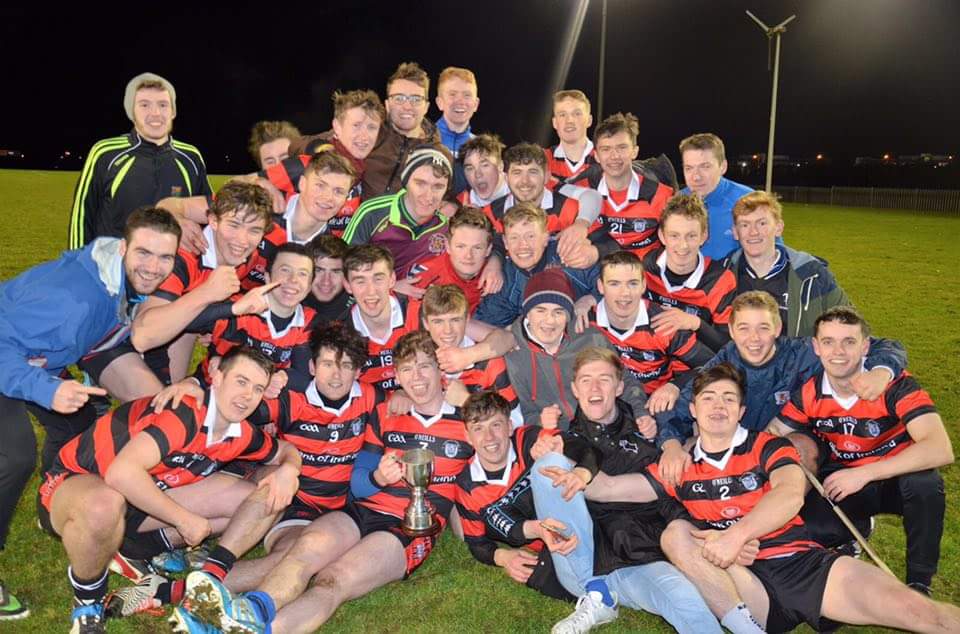 With Jack O’Neill, Aaron Coffey, Sean McCann, Eoin Kelly and Stefan Ennis making up a strong contingent of county minor hurlers in the team alongside newly selected Dublin senior star Cian O’Sullivan, there was an electric sense of expectation among the panel before last Thursday’s encounter at Dundalk IT.

A frenetic and forceful start showcased the aggression that would characterise the clash from the start. This was tempered as Mark Corry slotted over a free from 45 yards out to open the scoring. The lead would be exchanged numerous times over a match that would be decided on rallies and purple patches between the two sides. Frees were exchanged between the sides, with Corry hitting his second in a game where he only failed to convert on one occasion. Cian O’Sullivan was soon showing why he’d been called up at just eighteen, breezing past two UUJ defenders before converting a 65, having seen his initial shot deflected wide.

The game soon burst into life as Ross Gorey forayed into the half forward line before winning a breaking ball and swinging a hopeful strike over his shoulder. Fortune favoured the freshers here as the Jordanstown keeper failed to claim the dropping ball effectively, allowing it to fumble into the net. A Jordanstown rally soon saw them tie the contest at 1-3 apiece, showcasing their lethal attacking threat having scored a stunning eighteen goals in their previous two games.

The score remained tight for the rest of the half, with Jordanstown changing tack and opting to chip away from distance, a testament to the capabilities of the Trinity defence. Soon after, however, Trinity doubled their goal tally: a huge sideline cut from O’Sullivan around the halfway line collected by Eoin Kelly well before rapidly lashing home in a matter of moments. The trick was nearly repeated moments later, but the Jordanstown backline had learned their lesson and managed to shepherd Kelly into taking a solitary point leaving the score balanced at 2-6 to 1-7. Jordanstown rallied, however, and wheeled the scoreboard with a dominant period before half time in which four points were scored.

Despite going in two down at the half, the confidence of the Trinity freshers was immutable. This resolve and confidence was essential in what was to come in the second half supremacy. The tenacity of the side had been sparked and as play recommenced, Trinity began a period of electric play and pure dominance on the field. Eoin Kelly wasted no time in halving the deficit from afar and Jordanstown were soon caught up in the manic energy and superior fitness of the Trinity side.

Donagh Williams managed to hook his man using just his head, win the breaking ball and then a free which Corry chipped over to level the scores at 2-8 to 1-11. Cian O’Sullivan made the difference off a side-line cut again, hitting a sweet strike over the bar which has since been shared across multiple sites, adding traction to his meteoric rise. Sean O’Connor began to make himself felt at centre-forward, consistently rising high from puck-outs to feed the inside forwards, providing a foundation from which most TCD frees were won.

Eoin Kelly soon grabbed his second goal of the night, widening Trinity’s lead to 3-9 to 1-11. Crucially, the Dublin side managed to extend their scoring run beyond the goal, taking full advantage of the control offered by the midfield combination of captain, Cormac Keating and Jack O’Neill. The pairing worked well together, claiming each other’s’ breaks and securing consistent possession in the middle of the park, providing a platform from which Jordanstown’s frustrated fouling could be exploited on the scoreboard.

With frees steadily arriving, Corry took full advantage to push Trinity’s lead even further ahead. Conor Foley raided forward from wing-back and managed to get his name on the scoresheet, while Aaron Coffey surged past two men before slotting his own point between the post. As a furious twenty minute period came to a close, the scoreboard had swung eleven points, leaving the Dublin side nine ahead.

The contest had not yet finished, however, as Jordanstown took advantage of the lowered Trinity energy reserves, rattling home 1-5 and showing that their attack had not been entirely smothered as the Trinity coaches frantically rang the changes to provide the legs needed to see out the victory. The panel of second years, as is tradition when coaching the freshers, provided the substitutions necessary and had encouraged attack at the right time, leading to the run beyond half-time.

As the final whistle blew, relief and delight exuded from the Trinity bench as wild celebrations began. The victory should not be underestimated, considering the firepower of the Jordanstown attack and the status of Jordanstown as Fitzgibbon Cup competitors this year. What’s apparent is that this group of players will prove vital cogs to the full Trinity side in the years to come on the back of this decisive meeting.