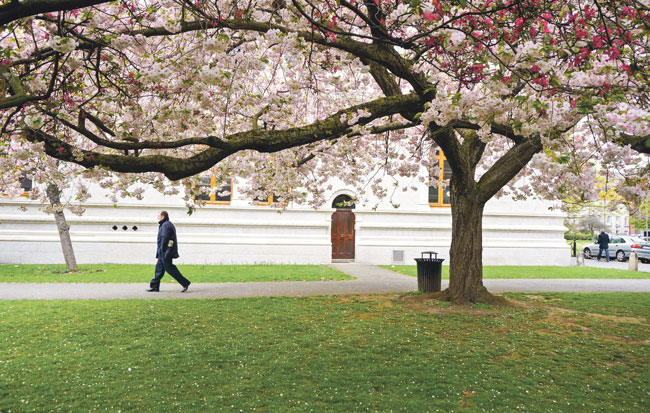 Having reached the end of their lives and become infected with disease, Trinitys iconic cherry trees are to be cut down. Lining the College’s boardwalk between the Cricket Pitch and the Rugby Pitch, the trees are to be replaced by lime trees.

The cherry trees have long been a staple on Trinity campus. The trees – whose scientific name is Prunus Avium Plena – are noted for their beautiful white double flower. Their elegant white flowers typically emerges at the end of April, brightening up study and exam season for many students.

The lifespan of cherry trees is typically between 50 and 60 years. However, they are often prone to diseases like silver leaf fungal infections, where a silver sheen is seen on leaves and infected branches often die. Cherry trees are also susceptible to powdery mildew and crown rot disease. Speaking to The University Times over email, David Hackett, Trinity’s Environmental Services Coordinator, stated that Trinity’s trees have themselves “become infected by diseases and fungi”, adding that “all living things have a life span”.

Hackett added that the trees will be replaced “on a phased basis over the next 5 years”.

With over 600 trees on the inner city campus, Trinity staff are particularly conscientious in preventing disease in trees which can have serious consequences. In the 1970s, a disease called Dutch Elm Disease spread and killed all but one of Trinitys elm trees – a single wych elm is the lone survivor.

Speaking to The University Times earlier this month, Hackett spoke of how plans are made 50 to 100 years in advance for Trinity’s grounds.

Hackett explained that “any planting, particularly of trees, that you do, you will never see. Your children will never see them. It’s your grandchildren and great grandchildren who will start to see them looking as they should because the timescale is, you know, so long”.

With this ethos, plans for the boardwalk are already under way. The cherry trees are to be replaced by lime trees, otherwise known as Tilia. Trinity already has Tilia trees, but the groundskeeping staff are hoping to increase this collection. Currently there are only a few Tilia trees in Trinity, located at the end of the boardwalk, amongst other trees.

While the cherry trees will not form a part of Trinitys landscape for much longer, their mark will be remembered. In 1993, the trees were featured in a pamphlet called Trees of Trinity College. The pamphlet was produced by Dr David Jeffrey, then-Chairman of the Grounds and Gardens Committee and then-Director of the College and Botanic Garden.

Inside, the pamphlet explains that the cherry trees are native to Ireland and describes the “purity of it’s white many-petalled flowers”. The trees profile is accompanied by a diagram of their flower and a map of Trinity on which the trees are located.

The Tilia trees that are on campus currently were also featured in the 1993 pamphlet, where they are described as being indigenous to South East Europe and Asia Minor. The Tilia tree will flower in late July to early August. Hackett added that “with the implications of climate change we need to use varieties or species that will cope better so future generations will inherit a pleasing campus plant/tree collection”.