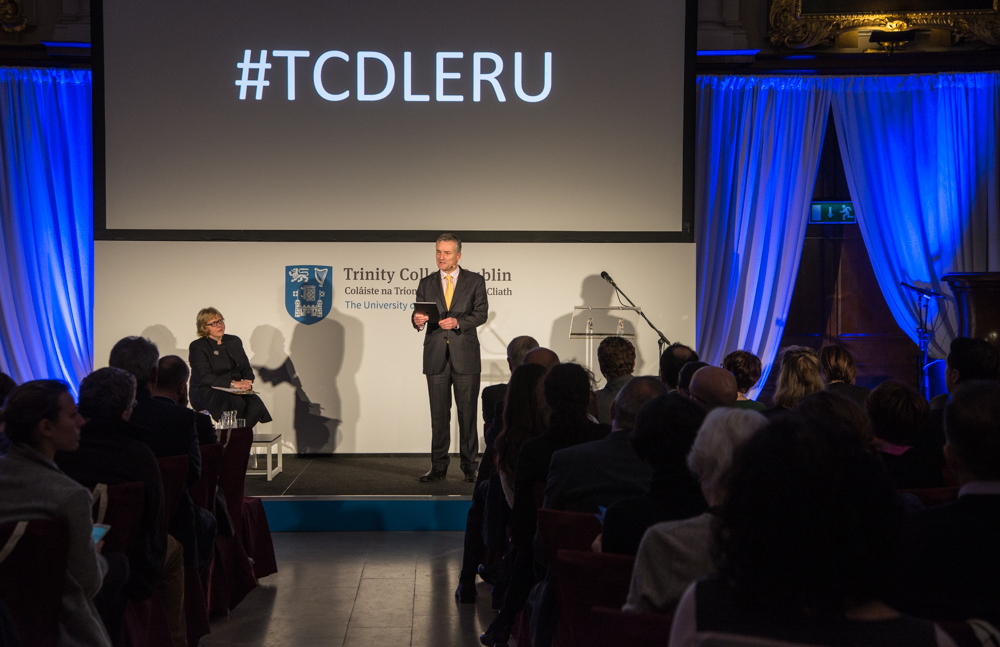 Speaking at the announcement of Trinity’s membership of the League of European Research Universities (LERU), the Minister for Education and Skills, Richard Bruton, referred to Trinity graduate William Hamilton. Hamilton, he said, was inspired to undertake his historic discovery of a quaternion number system after losing a chess match to a fellow academic. “Defeat”, Bruton said, “sent him in a new direction”.

One might say the same of Trinity. Since 2011, the state spending on higher education has decreased to the extent that only 40 per cent of Trinity’s funding comes from the government. It has been forced to aggressively develop the support it receives through philanthropy and to accelerate the rate of commercialisation across the university. During the same period, the university has tumbled down university rankings.

Yet, for those present in the Dining Hall this evening as Trinity’s membership was announced, this was all forgotten. Addressing staff at an event to mark the halfway point a few weeks ago, Provost Patrick Prendergast told staff: “We’ve not been caught napping.”

Over two years of lobbying, networking and preparation went into the launch today. The Provost, as he stood on the stage waiting on a call from the President of LERU, Prof Kurt Deketelaere, was visibly fizzing with excitement. Senior academics drifted through the room, looking anxiously towards the screen where Deketelaere would appear. When the announcement came through – that Trinity, alongside the University of Copenhagen, would be joining the exclusive group of 21 world-leading universities – the excitement was palpable.

Today, Bruton was asking Trinity to represent Ireland at the “high table” of European research

This captures how significant LERU is. Only last week Prendergast, alongside the six other heads of Irish universities, appeared before the Oireachtas Education and Skills Committee, cap in hand, asking for a new funding model for higher education. Today, Bruton was asking Trinity to represent Ireland at the “high table” of European research.

LERU is one of the first bodies the EU goes to when consulting on research. When deciding on a new research direction, or on what areas might benefit from funding, it is LERU the EU turns to. Trinity will be one of only 23 universities in Europe, out of thousands, with a direct line to the EU Commission.

Membership of LERU places Trinity among the most attractive universities for research in Europe. The universities we measure ourselves against, the ones that sit much higher up world rankings – such as the University of Cambridge in the UK or the University of Leiden in the Netherlands – will now sit at the same table as Trinity and discuss what direction global research should take.

At a time when universities are increasingly under threat, Trinity has joined one of the best academic clubs in the world

What does this mean for students? It will mean some of the best research in Europe will be happening in Trinity. Postgraduates might get the opportunity to work with the best researchers in their field. International students thinking of coming to the university, not yet convinced by the merits of Trinity, might think again.

Prendergast today recalled a conversation he had with Deketelaere when Trinity was first trying to attract the attention of this invite-only group. He wanted to know what information the university might have to share with LERU. Deketelaere, according to Prendergast, told him: “We have more information on you than you have on yourselves.”

LERU, Prendergast said, “makes no assumptions”. When assessing Trinity, what it found was a strong, English-speaking research university with substantial links on both sides of the Atlantic. It found an institution that was ready to help lead on global research policy.

Membership of LERU is a vindication of Trinity’s research direction. It is also a vindication of the world-class work of the university’s staff in an environment of austerity. At a time when universities are increasingly under threat, Trinity has joined one of the best academic clubs in the world.