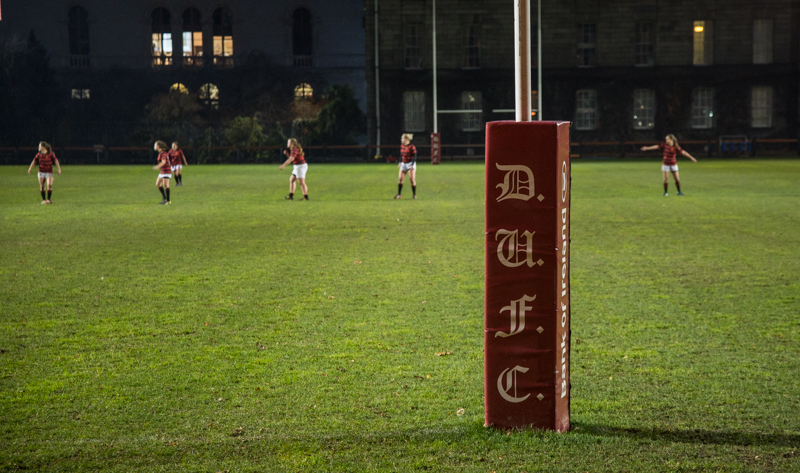 In a match that saw a number of Trinity debutantes see action, the dominant power of the visitors pack, combined with a strong kicking game proved decisive, with Portlaoise beating Trinity 17-27.

Portlaoise opened the Sunday afternoon contest in Santry with a deep kick-off, however it was fielded well by Maura Ford who carried to near the halfway line. An early penalty at ruck time however, left the home side struggling to escape their own 22, securing a pair of turnovers, but ceding possession back again in quick fashion. Portlaoise went through the phases and shifted the ball wide, however an excellent tackle from Camille Fayand prevented them from making the key pass which would have seen them in at the corner.

Imogen Guinness’ early injury would prove to be the first of many on the day in a physical encounter. A kick clear, failed to relieve the Portlaoise pressure as waves of attack brought the league leaders closer to the line. Excellent tackling and terrific line movement out wide held Portlaoise out, but momentum remained with the impressive visitors and eventually, second row Danielle Hallinan drove over. An impressive conversion attempt was only prevented by the width of the post, leaving the score at 0-5.

With Trinity taking the restart, it was their turn to apply pressure. A return punt sailed out on the full, but another excellent Portlaoise kick bounced into the Trinity 22 with no one there to claim it. Trinity however broke away excellently into the opposition half through a Raphaelle Deveaud run from inside centre. Crucially, the Dublin side had the field position to execute a superb break, as a terrific offload played in Fayand who beat a defender before offloading to Deveaud who sped in under the posts under immense pressure to level the scores. The angle of her finish proved crucial as Fayand was able to give Trinity the lead from a favourable position, bisecting the posts.

DUFC were soon on the attack again, Kayla Young finding space. However, the offload couldn’t find the hands of Fayand who’d shuffled across from left to right wing. A Portlaoise backlash was coming however, as they nearly found themselves in again. Deveuad did excellently in tackling her opposite number, Sarah Murphy, preventing an offload and a near certain try in binding her arm in the tackle.

More injured players limped their way to the students’ bench, with Ford sitting out the rest of the contest with a head injury. Strong carries by Emma Carrigan and then Charlotte Bowen brought the ball to the halfway, but a turnover in the ruck by Portlaoise’s Katie Donnelly switched the momentum again. Trinity claimed possession but crucially failed to relieve pressure. First, a clearance kick failed to gain the required distance, ceding possession to Portlaoise in exchange for a meagre five yards. At the next opportunity, the home side attempted to break from another passing move which had served them well earlier. However, launching an attack from the in goal area left them too condensed and led to another loss of possession near their own try line. Rosie Palmer at prop for Portlaoise eventually punished the students, powering between two tacklers and stretching to score. While the conversion was unsuccessful, the visiting outfit exuded confidence, with Palmer rallying her side at the half-time whistle with the score at 7-12.

The Portlaoise momentum continued uninterrupted after half time. Despite Trinity kicking off to start the half, the pressure was soon on the hosts as Stephanie Gleeson ate up ground to take Portlaoise into the Trinity half once again. Young denied them with a strong tackle, but as the ball shifted right, Palmer joined the attack once more in fending off a Trinity tackler to dive over for a second. A fourth try would follow soon after as Rachel Murphy who’d kicked well all game, showed her ability with ball in hand with a looped run down the right beating the students’ defence. Murphy failed to convert both kicks, keeping DUFC in the contest.

Several excellent darts were made by both sides, first Aurora Idier collected a bouncing ball and turned quickly, beating three tacklers, then Murphy made another strong run from out-half for Portlaoise to nearly touch down for a fourth. Deveaud provided two brilliant phases of play, first beating four separate tacklers and offloading and then, in the most impressive move of the match, combined with Fayand to exchange four passes to one another, beating several players and running fifty yards in the process. Laura Lynch Duffy profited from this superb running rugby, eventually stretching on the ground having been taken tackled just short.

Having re-entered the contest, DUFC’s discipline betrayed them, being penalised for hands in the ruck multiple on multiple occasions in a matter of minutes. Porlaoise’s Claire O’Connell took full advantage to run in her side’s final try and put the game to bed finishing in the corner. This time, Murphy made no mistake to stretch the visitors’ lead to 15 points. The students had time for one more attack however. Another Deveaud break brought Trinity to the five-metre line once more. Trinity shifted the ball out wide and Emma Carrigan ducked in to score in the corner despite a Portlaoise tackler attempting to force her out of play. The match finished 17-27 at the final whistle.

The DUFC women certainly provided an occasion for the spectator with their quick passing and fast breaks. Their quick running rugby offered much in the way of entertainment, however Portlaoise’s kicking game and powerful short distance running offered a versatile and well-rounded game that showcased why they were top of the table.