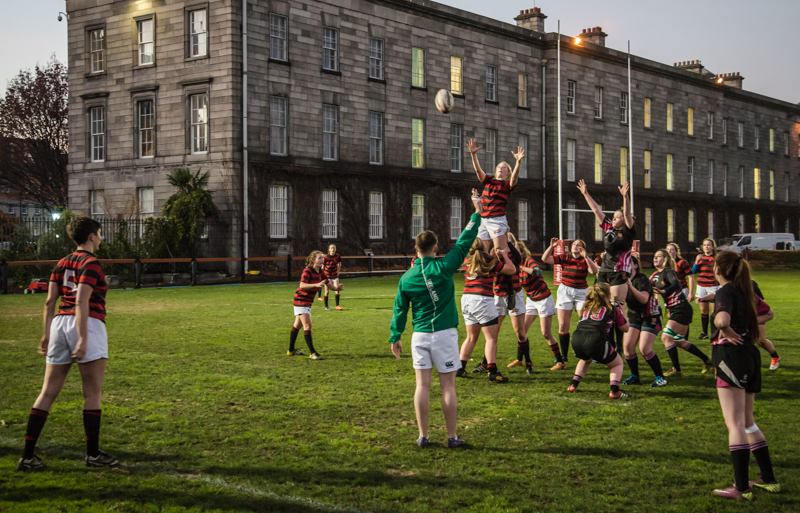 Wednesday evening’s contest under the lights of College Park between Dublin University Football Club (DUFC) and Carlow IT proved to be an enthralling encounter. Coming off the back of a heavy defeat to University College Cork (UCC), the meeting offered the home side a chance to regain some of their early momentum in Division One of the Student Sports Ireland (SSI) league. However, this not to be, with the visitors running out 31-17 winners.

Proceedings began in earnest featuring some exciting early running from DUFC, with centre Raphael Deveud in particular probing the opposition line from midfield. However, it was visitors who drew first blood and took an early lead, when flanker Rachel Malone was the beneficiary of some quick Carlow hands, before shrugging off the Trinity defence as she crashed across the line to claim an early try. The conversion was duly dispatched, giving the visitors a 7-0 lead within the opening five minutes.

Things went bad to worse for Trinity after 15 minutes. While pushing for a much needed opening score, the ball was turned over and collected by the Carlow centre, who produced a flash of brilliance with a magical run from just outside her own 22. Evading the tackles of the Trinity defence, she broke through the Trinity defence and crossed the line for the visitor’s second try of the evening. Almost immediately from the restart Carlow’s number eight extended their lead further, gathering the ball before driving through the DUFC line and easing in to place the ball under the posts. The visitor’s fly-half duly converted the additional points to give them a 19-0 lead after 17 minutes.

This seemed to shock Trinity to their senses and what followed was an extraordinary display of sustained attacking pressure, with DUFC setting up camp in the visitors half for the majority of the remainder of the half as they scrutinised the Carlow defence for a weakness to exploit. Coming close to cracking the resolute Carlow defence several times, Trinity began to find their feet in this game. Both Emma Carrigan and Maura Ford came close to notching an opening score. While Carlow struggled to break out of their own half, they were forced into several wayward kicks for touch, ceding possession and allowing for fresh waves of attacks. Finally after 37 minutes Trinity got their much deserved reward. Out-half Charlotte Bowen played a neat pass to Emma Carrigan who found a way through the resolute Carlow defence and forced her way over the line to open the home sides account for the evening. Romy Morrin meanwhile, was unlucky to see her conversion attempt cannon off the post leaving Trinity trailing 19-5 at half time.

After withstanding some early pressure, Trinity started the second half with considerable intent. Emma Carrigan tested Carlow with some good running following a quick penalty, before the ball was played to Maura Ford who was stopped metres from the line. Charlotte Bowen then took the initiative embarking on a fantastic run before eventually being hauled down inside the opposition 22. With some quick play off the ruck, Silje Ti broke through the solid Carlow wall and touched down. Morrin’s conversion attempt dropped just short leaving the score at 19-10.

Trinity remained relentless in their pressuring of the opposition and even a lengthy injury stoppage couldn’t arrest the momentum that they had built up. With play restarting Deveud, who enjoyed frequent success running at the Carlow defence as one of DUFC’s most reliable ball carriers, picked the ball up in her own half and advanced her team within 10 metres of the line. The Carlow defence held firm, twice holding Trinity up on the line. However, mid-way through the half DUFC got their reward when Deveud profited from some ill-discipline on the part of the visitors, receiving the ball from a Trinity scrum and breaking through the Carlow line, with Morrin adding the extra to bring Trinity within two points.

However Carlow managed to regain the initiative and rallied in the final 15 minutes as Trinity began to tire following an almost miraculous turn around. Despite some brave defensive play from Trinity, with Molly Boyne in particular putting her body on the line, Carlow broke through twice in the closing quarter. First a crisp move from the visitors undid the DUFC defence, with a wonderful reverse pass from the Carlow out-half opening up an overlap on the wing which was expertly taken advantage of, while an excellent conversion from the side-line gave Carlow a 26-17 lead heading into the final moments. Carlow sealed their victory in the closing moments, stealing a fifth try to add gloss to an impressive attacking performance, pushing over the line despite some valiant defence from Trinity and sealing a 14-point victory.

The defeat leaves Trinity in last place in the league on two points with four games played facing into the Christmas break. Their next opponents in the SSI will be a strong Dublin City University (DCU) team in February.