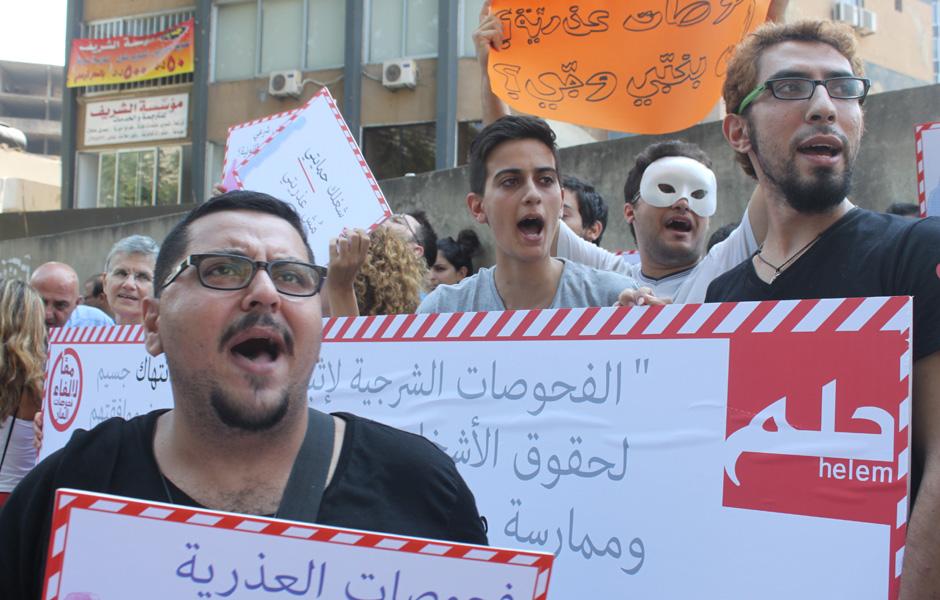 Helem: A Home Away from Home for LGBT Lebanon

A centre in Lebanon is providing security and solidarity for the LGBT community in Lebanon amid a quiet sexual revolution in the Arab world.

On a dimly lit stage in Beirut, a young woman with chocolate brown curled hair and excited eyes, dressed in a simple blue dress, begins to speak: “My name is Yara and I am gay.” Words tumble with passion and confidence in flowing, vibrant Palestinian Arabic: “When I run my fingers through her hair, I tremble. When I place my hands, my tongue between her thighs, I feel as if I’m returning home. When I speak with her, there’s no need for explanation. Home sweet home… Fucking a ‘real man’ won’t ‘cure me’. This isn’t a disease, nor a stopping-off point, nor a decision, nor an ice-cream flavour that suddenly popped into my mind. This is my reality.”

Yara thinks of her girlfriend and begins to orgasm.

Beirut is a vibrant kaleidoscope of cultures. Hugged by the Mediterranean, its heart sings outwards. Elegant ochre Ottoman mansions and mauve villas from the French Mandate jar awkwardly with gleaming new hotels and financial centres. Solemn, bullet-ridden buildings offer shadows of the city’s traumatic past. The streets breathe a heady, intoxicating vitality. As I stroll along the Corniche, Beirut’s palm-tree-lined Mediterranean esplanade, I smile and listen to the linguistic ballet of each conversation, as friends and lovers deftly weave between French, Arabic and English.

“For it means that vulnerable people such as trans* refugees from Syria, who often find themselves homeless, can come here, relax and do something as simple as have a shower, thereby reclaiming their basic dignity.”

Nestled among the pastel balconies of Beirut’s bohemian quarter, Mar Mikhael, I meet with Joseph Aoun in the Helem Community Centre, a social centre for Lebanon’s LGBT+ community, opened officially only a few days previously. Aoun is the charismatic co-ordinator of the centre, which aims to provide a secure space in which LGBT+ people can meet on -another, organise and partake in activities and find support services. He also works for Helem, the largest LGBT+ association in Lebanon and the first to be founded in the Arab world.

Helem means “dream” in Arabic. As Aoun warmly welcomes me inside the centre, proudly showing me the LGBT+ library he has assembled, the “chill-out room”, a small kitchen as well as bathrooms and shower facilities, it occurs to me that such a space may well seem like a “dream” to many who visit it for the first time. “Including the kitchen and shower facilities in the centre was really important to me”, he says. “For it means that vulnerable people such as trans* refugees from Syria, who often find themselves homeless, can come here, relax and do something as simple as have a shower, thereby reclaiming their basic dignity.”

Helem was officially founded in 2004 as the evolution of an underground association called “Club Free”. As an activist organisation aiming to improve LGBT+ rights in Lebanon and the wider Arab world, one of Helem’s principal aims is to overturn Article 534 of the Lebanese Constitution which states: “Any sexual intercourse contrary to the order of nature is punishable by imprisonment up to one year.” This article, a relic of French legislation introduced during Lebanon’s French mandate, has been used to imprison gay people in recent years. However, in two landmark trials in 2009 and 2014, the judges in question ruled that homosexuality is natural and hence that it cannot be prosecuted through the use of article 534. Nevertheless, as Lebanon retains a French-influenced codal system, these rulings do not offer the same protection they would offer under Ireland or the UK’s Common Law system. In essence, different judges could choose to interpret the article differently.

“In 2014, 28 men, including 14 Syrians and one Iraqi, were arrested by the Lebanese “morality police” in a raid on a gay-friendly hammam in Beirut.”

Unfortunately, these “morality police” are not the only threat to Lebanon’s LGBT+ community. While standing outside on the balcony of the Helem community centre, Aoun tells me about his experience being interrogated by the Lebanese military intelligence on account of his LGBT+ rights work online: “They imprisoned me in a small cell… Blindfolded, I couldn’t see their faces… only hear them jeering, sneering as they started to humiliate me…They called my parents, tried to shame me…. But I knew I was right. And I knew my rights. I stood strong.” 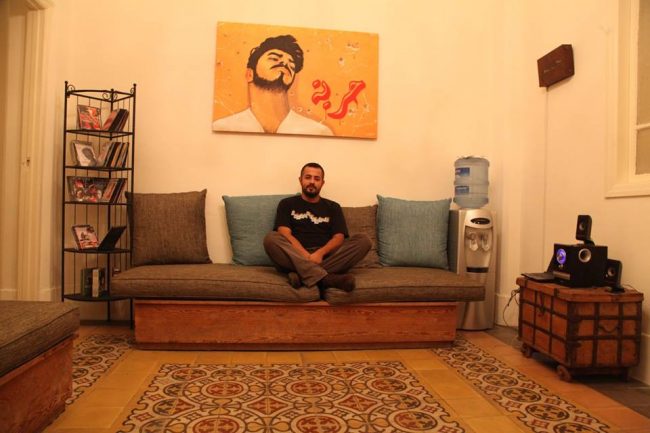 Joseph Aoun, co-ordinator of the Helem community centre, sits in the centre, which includes an LGBT library and “chill out” area.
Helem photo

A key aspect of Helem’s work today involves legally defending individuals like Aoun who face state or police oppression on account of their gender or sexual orientation. However, while fighting for better legal rights remains a key aspect of Helem’s work, Aoun’s aim in creating the community centre has been to create a more relaxed, social side to their mission: “Not every LGBT person in Lebanon should feel like they have to be an activist, fighting for the rights of the entire Arab world. It is important that people also simply have a space to relax and be themselves, like in any other country in the world.”

This new direction for Helem is influenced by Aoun’s previous work managing Beirut’s best-known gay bar, Bardo, for seven years. He spoke to me about the new projects planned for the community centre: “We’re lucky to have an enthusiastic group of volunteers, eager to help others in their community. Together we’ve planned many different social groups: an LGBT book club in both Arabic and English, an art therapy class, storytelling nights where people can share their experiences – be they positive or negative – in a safe and accepting environment, health promotion groups, LGBT cinema nights etc. It’s a very exciting time for Helem.”

Following my initial conversation with Aoun, I visited the Helem centre on a few occasions to better understand Helem’s work and to hear stories from those who frequent the centre. Most memorable was a storytelling night, in which people recounted personal stories from their lives. Perhaps the most striking feature of the group was its diversity. In many aspects of Lebanese life, society is still segregated between religious groups and social classes. But in the chill-out room of Helem’s centre, an uplifting diversity of accents resonated, not only Lebanese but also Syrian and Palestinian ones. People’s names also indicated a diverse array of religious origins. There were trans* people, refugees from other Arab countries, nervous teenagers, artists, people from rich and poor backgrounds. And so I listened to people’s stories. Little by little, those gathered recounted experiences from their life. Many spoke of sexual harassment, of bullying and isolation, of familial rejection and even of rape. But the room also echoed with tales of fun, of love, of freedom and of hope.

“Many spoke of sexual harassment, of bullying and isolation, of familial rejection and even of rape. But the room also echoed with tales of fun, of love, of freedom and of hope.”

While homophobia is still rife in Lebanese society, there are many signs of hope. Attitudes towards homosexuality amongst university students seem, for the most part, refreshingly accepting. Moreover, daily battles are being won against homophobia in society at large. Sustained campaigning by Helem and other NGOs has led most Lebanese media to adopt the term “mithli”, which derives from the Arabic root for “same”, to refer to gay people, as opposed to the pejorative terms formerly used. The most popular rock band in Lebanon, Mashrou’ Leila, has an openly gay singer, Hamed Sinno. Lebanon’s most respected living author, Amin Maalouf, a member of the Académie Française, has spoken out against homophobia in Lebanon and France, and recently included a gay character in his novel Les Désorientés.

Perhaps the most exciting aspect of Lebanon’s burgeoning sexual revolution is its capacity to change society for the better across the Middle East. For although Lebanon is one of the smallest countries in the Arab world, due to its strong cultural and intellectual traditions, its influence has always been one of the strongest. Indeed, since the establishment of Helem, LGBT associations have sprung up in countries such as Tunisia and Palestine. Decisions such as that made by the Lebanese Psychiatric Society and the Lebanese Medical Association for Sexual Health to unequivocally state that homosexuality is not an illness influence attitudes across the Arab world, improving the lives of LGBT people across North Africa and the Middle East.

“Although Lebanon is one of the smallest countries in the Arab world, due to its strong cultural and intellectual traditions, its influence has always been one of the strongest.”

I ended my conversation with Aoun by asking him of his hopes for Helem for the future and if he had any message to give to LGBT+ people in Ireland. His answer was characteristically hopeful: “We are aiming to reach a point where Helem’s work would stop being a necessity. We may be dreaming on that part. However every achievement in this world has started with an idea, or rather a dream. And we are allowed to dream as much as we want and to work hard on making our dreams reality, maybe one that shall happen in the near future.”

In discussions on LGBT awareness, it quickly becomes clear how influential each national development is in the larger attempt to shift the discourse and promote acceptance. Aoun highlights Ireland’s progressive stance on LGBT issues, saying that “in Lebanon we greatly admire Ireland for being the first country that legalised same sex marriage by public vote. While gay people shouldn’t have to ask their fellow citizens to grant them basic human rights, it was impressive for us that a whole society decided on that and we’re sure it couldn’t have happened without the efforts of Irish activists”.

Aoun’s point is clear: there is a “chill-out space” to be found in global discussion of LGBT rights, a space that can bridge borders and oceans. His ethos, and that of Helem, can be summed up in his final statement to me: “Dear LGBT people of Ireland – till we meet, be safe and stay proud!”