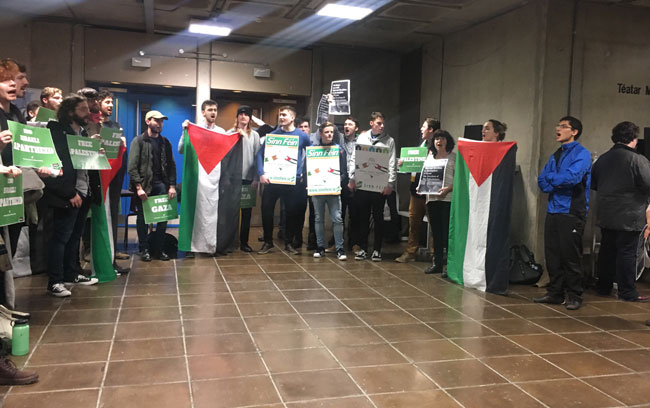 Trinity has described the cancellation of an event with the Israeli ambassador after protests as “an unacceptable attack on free speech” with Provost Patrick Prendergast stating that the action of protesters “represents the antithesis of what Trinity stands for”.

In a press statement, the College stated that it “regrets” that the event with Israeli Ambassador His Eminence Ze’ev Boker, organised by the Society for International Affairs (SOFIA) was cancelled after a protest from both students and outside of Trinity, organised by Students for Justice in Palestine (TCD).

Provost Patrick Prendergast also criticised those who protested in the statement, as they were stopping a guest from speaking: “This was most unfortunate and represents the antithesis of what Trinity stands for. Universities should be able to facilitate the exchange of ideas. The protesters have violated that fundamental belief.”

“Trinity will remain a home for debate and we will do everything possible to make sure that efforts to suppress the free exchange of ideas do not succeed. I look forward to welcoming Ambassador Boker back to Trinity to speak again in the near future”, Prendergast continued.

They followed this by stating that the event had been cancelled before Boker arrived “amid security concerns”.

“University officials had unsuccessfully tried to get the protesters to leave an area surrounding the door to a lecture theatre”, they admitted. The group of about 40 protesters last night chanted “in our thousands in our millions we are all palestinians”, “shame shame shame SOFIA SOFIA SOFIA” and “from the river to the sea Palestine will be free”.

Trinity said that Boker has been a “regular and welcome visitor to Trinity since his appointment”, and that he had attended an event in Trinity last week, and had dinner in College prior to the event.

Following protests by Students for Justice in Palestine (TCD), that saw Boker’s visit to speak in Trinity with SOFIA being cancelled, the Israeli embassy also released a statement, on their website.

In the statement the embassy said that they were “horrified by the vicious action of a group of protestors [sic], which denied the Ambassador of Israel his right to freedom of expression at Trinity College last night”, adding that they were “sure that an esteemed university such as Trinity will take the appropriate measures to deal with the instigators of last night’s protest”.

The embassy accused the, approximately, 40 protesters of chanting “genocidal refrains, which call for Israel’s destruction, while barring access to the lecture theatre”.

In a statement on their Facebook page, Students for Justice in Palestine (TCD) said that the campaign was “heartened to announce the success of its demonstration against the Israeli Ambassador’s “open discussion” with the Society for International Affairs in TCD”.

Whereas in a statement on their Facebook page, SOFIA said: “We feel it is deeply regrettable that in this circumstance, the opportunity to facilitate discussion between students and the Israeli Ambassador, in a respectful and moderated way, was lost.”

The statement from the Israeli embassy went on to say that the protesters “obviously have no interest in helping efforts to solve the Israeli-Palestinian conflict, but rather wish to ignite and enflame [sic] the situation”.

“It is a pity to see such a small and extreme group denying academic thought, exploration and discussion from an Irish audience but unfortunately these are the bullying, intimidating tactics of the [boycott, divest and sanction] movement”, they continued.

Students for Justice in Palestine praised the “commitment” of the “student activists” in their statement saying that those “who assembled to voice their support for human rights and the principles of nonviolent boycott in solidarity with Palestinian communities is an inspiration”.

The group believe that the protest “served as a response to the ongoing, systematic violations of human rights and international law perpetrated by the Israeli State, of which Ambassador Boker is a direct representative”.

In their statement SOFIA said that they recognised “the Palestinian struggle and fully supports the right to peaceful protest”. However they continued by defending the event saying: “SOFIA does not give legitimacy to any of our guests views, but offers a platform for free and open debate. The accusations made against our society demonstrated a tragic misunderstanding of our mission statement and aims.”

“We maintain that free speech is for everyone, not just for those you agree with”, SOFIA concluded.

Concluding their statement Student for Justice in Palestine announced that they will be delivering a petition for an academic boycott of Israel on the grounds of human rights, to Chancellor Mary Robinson, the Provost, and the Board of the university in Front Square on Friday, February 24th, at 1.40pm.

Speaking to The University Times last night, Chair of SOFIA Grace Conway commented on the cancellation of the event: “We are deeply saddened by the student reaction against the event. We feel that it was a misunderstanding of what we were trying to do as a society, which was to provide a platform for discourse and we don’t discriminate against any ambassador, we invite all ambassadors and treat the with respect and decorum as diplomats. We don’t discriminate against countries whether or not we support their political beliefs.”

“SOFIA are a neutral party and we provide a platform of discussion and don’t support or condone and of the behaviour of the countries which that ambassadors represent”, Conway added.

Last night, Ciaran O’Hagan, founding member of Students for Justice in Palestine (TCD), said to The University Times that “the message here is that we respect the human rights of Palestinians even if the Israeli ambassador doesn’t, who has gone on record as saying the siege of Gaza doesn’t exist and justifying and whitewashing the settlement regime”.

According to SOFIA’s Facebook event page, the reason such a visit would have been interesting is due to “Israel’s particular history but also after the recent of meeting of President Trump and Prime Minister of Israel Benjamin Netanyahu”.

Students for Justice in Palestine (TCD) said, in a statement to members, that the “event cannot be justified on the grounds of political balance – nor in the name of freedom of expression” and were calling for SOFIA’s event to be “cancelled immediately by SOFIA, and, failing such action, actively opposed by members of the student body”.

Speaking to The University Times before the event, Edwyn Hitchcock, a member of the the Students for Justice in Palestine (TCD), said that the campaign is seeking for people to take a stance to “boycott, divest from Israeli companies, and sanction at state level the Israeli state, based on their breach of human rights and international law”.

Other groups present among Trinity students were students from University College Dublin (UCD).

An Garda Siochana and College security attempted to break up the protest, which continued for several minutes following the announcement of the event being cancelled.

Speaking to The University Times before the event, Jack Dykstra-McCarthy, Secretary of SOFIA responded to the proposed protest: “I fundamentally disagree with no platforming. Obviously we’ve invited someone controversial, we want to hear every single view. The protest itself is fine and good a far as i’m concerned.

Students for Justice in Palestine (TCD) called the event “an imbalanced and inappropriate approach for SOFIA to adopt”, on their Facebook event for the protest.

“Hosting Ambassador Boker in this fashion is also a direct breach of Palestinian civil society’s call for the nonviolent boycott of the Israeli State”, they continued.

“The question of free speech is neither here nor there. They have the awesome amount of free speech to go and protest and demonstrate and we have ours to invite someone to speak and have questions. Whether that particular guest should have it it’s just so concerned because there is a delicate situation and the fact that these events have been going on for decades that there is a lobby about it”, explained Dykstra-McCarthy, adding that there was no protest when the society invited the Turkish ambassador.

The group’s campaign for justice in Palestine has the endorsement of Jewish Voice for Peace, the Israeli Committee Against House Demolitions, Academics for Palestine and others

The group state that the ambassador has “publicly denied the existence of Israel’s military blockade of Gaza” and has obscured the details of the Israeli military’s bombardment of the Gaza Strip in 2014, and as a representative of the Israeli government he has “openly committed to illegal policies of occupation, settlement and discrimination”.

“The ambassador himself has dismissed all the allegations directed toward the Israeli state, where there is clear evidence that they are enforcing an apartheid state”, Hitchcock commented.

In the statement to members, the group said that their campaign “opposes SOFIA’s decision to offer Israeli Ambassador Ze’ev Boker a platform to speak in the university, and advises the immediate reversal of this decision”.

Students for Justice in Palestine also objected to the event’s description of an “open discussion” because the of the strict security surrounding the visit and, they claim, that the topic of the evening was being set and controlled by the Israeli Embassy: “This is an imbalanced and inappropriate approach for SOFIA to adopt.”

Hitchcock explained their stance against giving Boker a platform: “Palestinians in Gaza don’t have free speech.”

SOFIA describe Boker as having been “involved in international diplomacy for over thirty years with postings in Czechoslovakia and The Hague, and in addition, he was the Deputy Diplomatic Advisor to the late Prime Minister, Yitzhak Rabin.”

They continue by saying that “his wealth of experience and knowledge is sure to bring us a unique insight into a well-known delicate situation”.

“We don’t support or condone the country or the ambassador or the opinions, we support the debate“, commented Dysktra-McCarthy.

“We feel that the incredibly negative reaction that prevented students from being able to challenge and share their opinions, and to ask difficult questions which is what we were trying to give people the opportunity to engage in discourse”, Conway concluded.