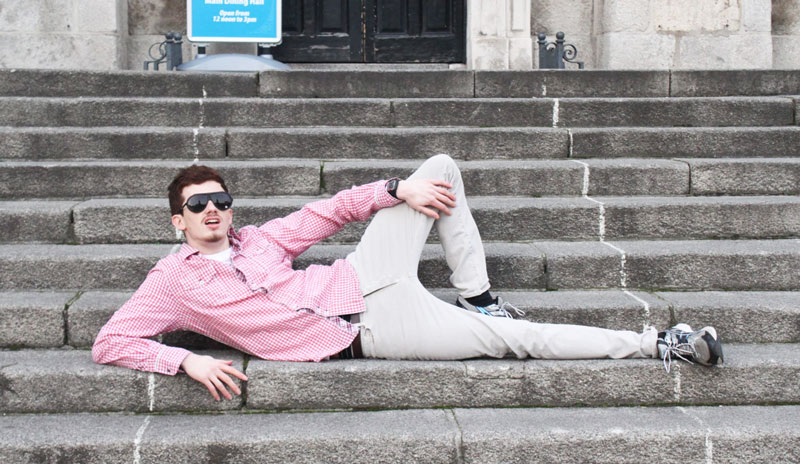 It’s 2013, and candidates in the Trinity College Dublin Students’ Union (TCDSU) elections are anxiously preparing to speak to the electorate from the Dining Hall steps as part of an annual and time-honoured tradition. At a time when most candidates and their accompanying posse are attempting to control their nerves, Cameron Macauley is, slowly and shakily, being helped up the steps in a pair of rollerblades. Asking the bewildered Education Officer, Dan Ferrick, to hold him up, he launches into his speech: “Good afternoon the electorates. I’m Cameron Macauley. I’m here today to talk to you about me, and why my rise to the top will be inevitable and ruthless.”

In the two weeks to follow, Macauley, as one of four candidates running for Entertainments Officer, would present his Thursday night offerings as “free in and unlimited €5 cans in the Pav”
and announce that he also was running for Welfare (crudely scribbling such in black permanent marker on his manifestos that had previously claimed “Watch out Welfare”) while declaring, repeatedly and forcefully, that the party cannot stop.

This involved launching a strong attack on the “Banter Vacuum” that is the library, declaring its hours to be “an absolute joke” because, really, those hours should be done away with entirely. Running laps around the cricket pitch until it closed and attempting to scan cans into the library’s book scanners, a defining image of Macauley’s campaign is the bewildered face of one student in the Lecky as a can of Bavaria is placed on the desk in front of him.

Now, four years after his campaign, Macauley looks back fondly on the time that he spent entertaining Trinity’s students, saying to The University Times: “You go to extraordinary lengths for the sake of just absolute farce. It was very very fun nonetheless and I wouldn’t change a second of it.” His favourite moments? Alongside the rollerblades and videos, attempting to get into Wezz, the infamous teenage disco, on camera to “get an exposé on Dublin club culture”.

As much good as the student body does, and I’m not detracting from that at all, I think ultimately no one should take themselves too seriously

These campaigns offer a break from what can often be a draining campaigning period, for candidates, their teams and, of course, students at large. When everyone is passionate and desperate to win, watching every speech can be exhausting – almost making you yearn for someone to show up in a pair of rollerblades. But for Macauley, there’s even more motivation behind looking to offer up some genuine entertainment during what are a gruelling, intense few days: “I think it instills a sense of levity in the whole thing. It brings it back down to earth somewhat. People can go off in this priory campaign, modelling themselves on greats of the past, and in actual fact it’s all quite silly, really. As much good as the student body does, and I’m not detracting from that at all, I think ultimately no one should take themselves too seriously. No one. I think it’s rooted in that.” 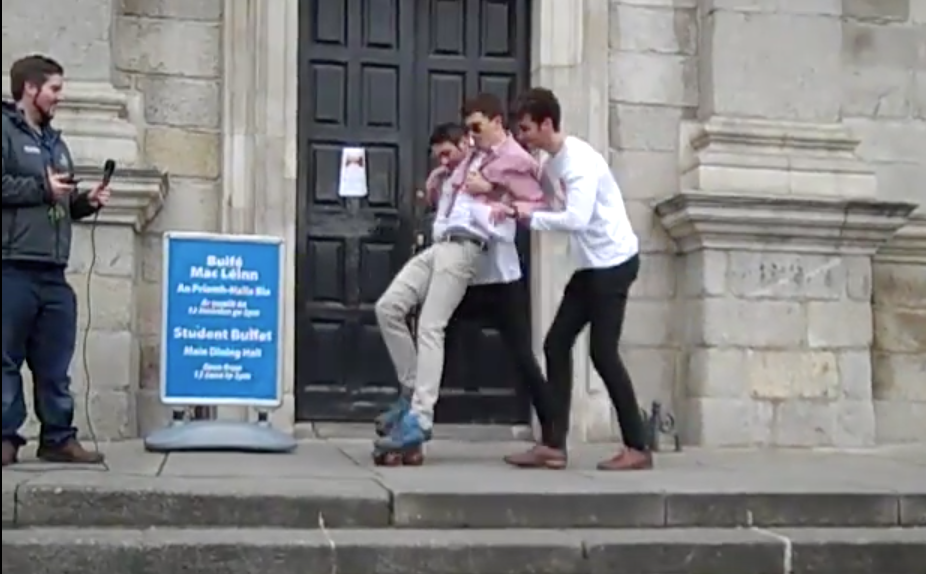 “It’s quite hard to break out of the bubble sometimes and just see ultimately how ridiculous everything is. I think that’s what we were doing”, he continues. “It was just a very fun few weeks for us where we could just take the piss slightly, really. And that was it.”

Very few students currently in Trinity would have any experience of such a campaign, but these “joke campaigns” used to be commonplace during the TCDSU elections. Alongside Macauley as he campaigned to be “Ents Overlord”, “Ents Provost” and “Ents Taoiseach” was Conor “Smeesh” Gleeson who, also running for Entertainments Officer that year, embraced Amber-Leaf-style branding and naked photoshoots with those taking part covered only by cutouts of his own face.

At the same hustings on the Dining Hall steps as Macauley’s rollerblades, Gleeson’s PR manager gave an impassioned speech wearing one of said cutouts (not one of the ones used for the aforementioned photoshoot, we hope) while Gleeson himself spent the allotted minutes rolling up a cigarette. “If you look at each and every one of our policies, all of them are achievable, unlike ents officers of yesteryear”, he proclaimed to boos, before launching into a philosophical lament about the nature of truth.

But why hasn’t there been any such campaign since? Part of the reason might be the deceptive amount of work involved. Macauley admits that the amount of effort that he and his team went to “was a little bit ridiculous”. Between the expense of their nylon football jerseys – “they ended up being absolutely extortionate” and the effort that went into his manifesto – “there was an image of me talking to my own head on my hand like an updated Hamlet but it took a while to photoshop it perfectly, so that the head was in my hand in the right way” – running a joke campaign that will actually make people laugh takes as much effort, and committed people, as running a campaign that aims to win. “There was certainly a level of planning in it, which took up a lot of time, and which was actually quite ridiculous looking back”, Macauley admits. 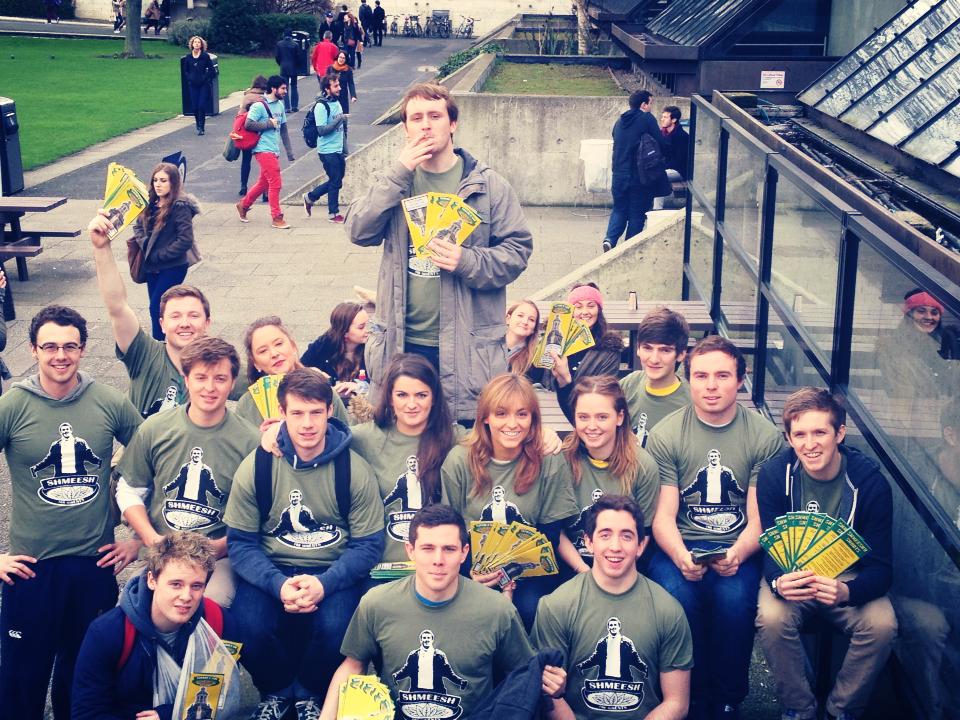 “I know it presents kind of a paradox, because here I am talking about embracing the humour of the situation when really I have the same campaign machinery as everyone else and in a way also take it as seriously. So I’m actually no better than any Machiavellian candidate. Really, I’m no different.”

Another factor is the expense. Macauley notes that, for their printing costs, they “weren’t reimbursed in any way shape or form, it all came out of our own pocket, and some of my team were a little bit more sluggish to reimburse me and Paul, the campaign manager. But my memory is long and they know who they are”.

But these reasons, while presenting obstacles to overcome, don’t present any definitive reason. “I have a feeling that someone will come around again, to be honest with you. I couldn’t tell you why specifically, really”, Macauley concludes. But, when another does emerge, “the fact that it will be a novel thing will be the best part of it, because no one will have seen it before”.

As well as helping to break the overall tension, joke candidates seem to attract attention from outside of Trinity’s walls in a way that normal election campagins simply do not. Moments of silent cigarette-rolling aside, the standout moment of Gleeson’s campaign was his “Just Shmayin’” campaign video, a parody of the viral Just Sayin’ video, which made observations about Trinity life: “Two-for-ones and three-in ones, 5-0 apologies, house six break-ins, relationship break-ups and ‘Who drank all me fuckin’ milk lads?’” The video racked up over 14,000 views and was, according to Newswhip, the fastest-spreading story in Ireland. It was subsequently picked up by media outlets like Joe.ie – something that can get candidates fined, but that doesn’t seem to have been an issue in the last few years, with Trinity’s campaigns rarely reaching outside its walls.

Even though it may seem like a joke, a lot of the stuff that I did was for real, as was the case with all of the theatrical candidates. When I ran to close the library, I ran close to a marathon myself on the cricket pitch

In terms of receiving national media attention, it was 2011 presidential candidate Aaron Heffernan that swept the nation. Running for the position of President of the USA – United Students (a)Union – Heffernan gave a thoroughly convincing Obama impression, complete with bodyguards, “I guess we can?” catchphrase, impromptu lectures on international politics, formal “opening” of the Arts Block with a ribbon cutting ceremony and a balloon modeling workshop in the Arts Block – an impression that he was later brought on to RTÉ’s The Saturday Night Show to give.

Referred to as the joke candidate, Heffernan, like so many other joke candidates, was the actual front-runner before dropping out of the race, prompting speculation as to whether or not he would actually take the role. The success of Heffernan’s campaign caused The University Times to start covering his campaign seriously. As one of our reporters wrote at the time: “Can’t quite believe I’m writing this. I hadn’t originally intended doing a serious set of questions to Aaron. However, given how strongly he is performing in The University Times polls, his campaign merits serious scrutiny.”

In later analysing the elections, the paper decided that Heffernan was “now the yardstick by which all joke candidates will be measured, and they will be found wanting … It was a campaign that worked on every level, from his grand opening of the Arts Block to his secret gig in the SU Bookshop, and yes, the tragic death of his bodyguard Prudence at the hands of a grizzly bear on the Arts Block ramp.” 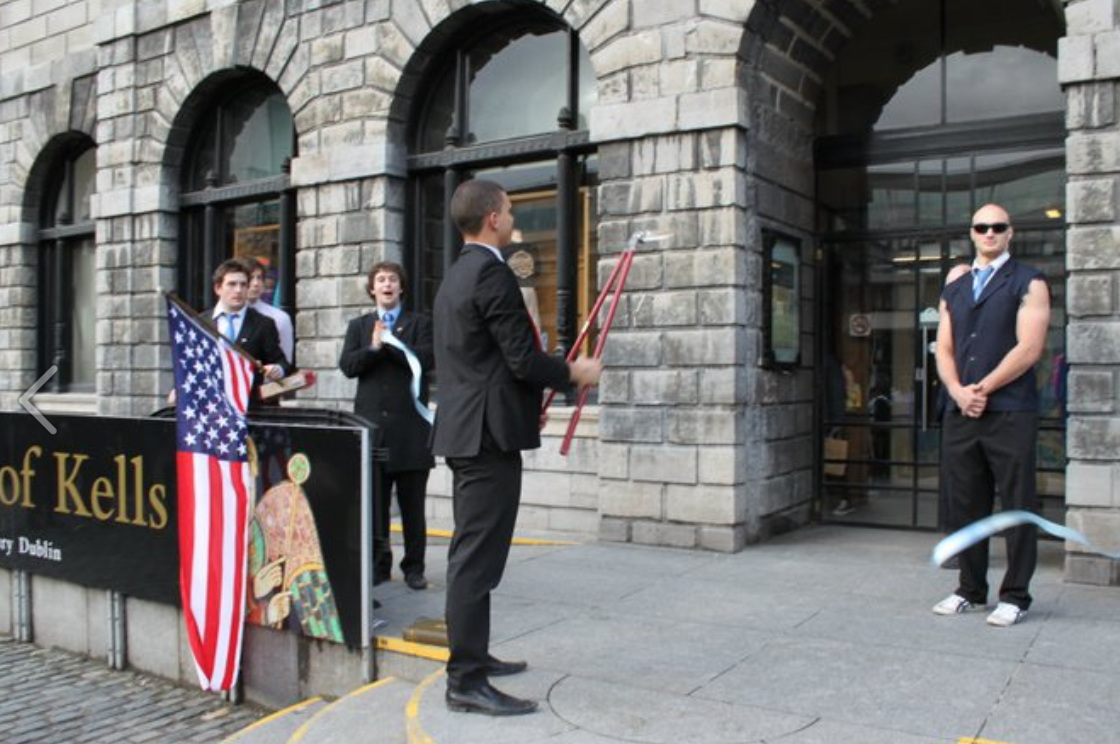 Heffernan, with his bodyguard observing, formally opens the Book of Kells

There seems to be another benefit of joke campaigns, however: getting more students excited about the elections. While there is no real hard evidence that they increase voter turnout considerably, more students are happy to discuss campaigns, instead of just dodging manifestos in the Arts Block, and seem more generally aware that elections are going on. Indeed, Heffernan’s campaign wasn’t just notable as a joke campaign. The conclusion that year was that Heffernan’s campaign “showed that there is a lack of engagement generally between students and the Students’ Union on a policy level, that students would prefer a candidate who ran as an elaborate joke to candidates who were serious and hard-working in trying to come up with policies that they felt would genuinely benefit students”.

This could be a fairly damning indictment of Trinity’s elections, and perhaps politics more widely, but one thing that is clear is that running such a campaign can’t be entered into lightly: “Even though it may seem like a joke, a lot of the stuff that I did was for real, as was the case with all of the theatrical candidates. When I ran to close the library, I ran close to a marathon myself on the cricket pitch and all in the middle of a study period. I had a moment of clarity as I was doing it where ‘I really actually should be working towards my degree’. But I think it was certainly worth it in the end.”