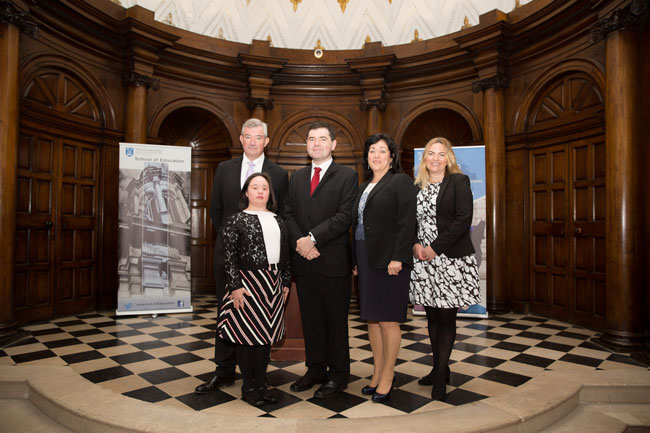 The Trinity Centre for People with Intellectual Disabilities was founded on the back of a philosophy of inclusivity. “We have one world. That’s it. We all live in it”, explains Dr Carmel O’Sullivan, Head of Trinity’s School of Education. “There is only one world and every one of us make up that world. That is what I understand by inclusion.” Through its programs, courses and research, the centre promotes the inclusion of people with intellectual disabilities in education and society. In an email statement to The University Times, Prof Michael Shevlin, the Director of Inclusion in Education and Society, spoke of the centre’s goal: “We aim to enable a very marginalised group of young people to experience third level education, that will equip them to lead independent lives, gain employment and pursue further courses to enhance their education.”

Established in 2004, the Trinity Centre for People with Intellectual Disabilities was then called the National Institute for Intellectual Disability. “It was originally a vision amongst a number of academic departments that were interested in the area of inclusion and intellectual disabilities”, explains O’Sullivan. “It was very visionary at the time. It was innovative.” The institute, which was attached to the School of Social Work and Social Policy, developed the Certificate in Contemporary Living , a two year full-time course for students with intellectual disabilities. Following the success of the course and further support from College, the Certificate in Contemporary Living was renamed and reformatted. The new course, Arts, Science and Inclusive Applied Practice, became an accredited Level 5 certificate on the National Framework of Qualifications last year. September 2016 saw its first intake of students.

Over the course of two years, students take modules in a range of topics from health science to art history. O’Sullivan explains that the course encompasses all three faculties of the College: “It is giving them a broad based education, which is very similar to what the university wants to do with the Trinity Education Project.” The diverse range of modules has been embraced by all students in the course.

Speaking to The University Times, students Shane McGilton, Marian O’Rourke, Dairine O’Rourke and Mark Hogan discuss their varied curriculum. “I like coming here” says Marian O’Rourke. McGilton, who travels into college from Laois each day, comments: “I like new things. I like all the classes… Last year ,we did learning theory and learning styles.” Dairine O’Rourke credits maths as one of her most enjoyable subjects, whilst Hogan is particularly interested in his Italian module. Introduced only this term, the module combines art exploration with Italian language. Speaking to The University Times, Erika Piazzoli, an expressive arts instructor and Italian teacher on the programme, outlines the module’s aim: “The research purpose of this project is to find out what happens when you embody learning a foreign language, and in particular what happens if you do that through visual arts and drama.” Piazzoli is collaborating with Dr John Kubiak, the centre’s Teaching and Learning Officer, for the module. Together they hope to transcend the limitations of rote learning by teaching the students Italian through embodiment and active learning. “That’s the magic”, says Kubiak, speaking to The University Times. “I think that is the great thing about working in this area. You are constantly creative with the way you deliver your modules and materials.”

The ultimate goal is that the students will all get jobs afterwards. It’s the same as any graduate. That’s why you go to college

Employment is a huge concern for any student when they leave college. Graduation, despite the celebrations, is an uncertain and anxious time. Finding a job you enjoy is, for most students, a major ambition. Speaking to The University Times, Trinity Arts, Science and Inclusive Applied Practice students Hugh O’Callaghan and Niamh Biddulph, express a similar sentiment.“I’m hoping to get better qualifications at the end of the two years” explains O’Callaghan. “I want to be able to get a job that I actually want to have, instead of a job that I don’t want to have.” For Biddulph, the idea of securing a good job is one of her motivators: “I need to do really well so that it could hopefully help me find a good job that would suit my needs in the future.” To help make the transition from college as easy and enjoyable as possible, the Arts, Science and Inclusive Applied Practice programme does not just equip its students for the workplace, it also paves a pathway for them into employment. It does this through its business partnerships. “We want to develop this transition pathway”, notes O’Sullivan, “because transitions, for all of us, are where people fall down”.

By partnering itself with a large number of Irish businesses, students of Arts, Science and Inclusive Applied Practice have the opportunity to complete work placements during their time in Trinity. Speaking to The University Times, Marie Devitt, the centre’s Pathways Co-ordinator, outlines this process: “In the second year of the course, the students go out on a work placement with a partner company for eight weeks, for one day a week. This year, as we only have a cohort, the businesses have agreed to take a graduate instead. We have three graduates who are going on a work placement with Bank of Ireland, starting next week.” Bank of Ireland is not the only company currently partnered with the centre. GE Capital Aviation Services, IrishJobs.ie and A&L Goodbody are just several of the many businesses providing work placements and funding for the centre. This year, the students were invited to visit GE Capital Aviation Services where they delivered a presentation to the company’s CEO Alec Burger.

“Students and businesses love it”, explains Devitt. “The ultimate goal is that the students will all get jobs afterwards. It’s the same as any graduate. That’s why you go to college.” Such has been the case for Trinity graduate Mei Lin Yap. Since completing the Certificate in Contemporary Living course in 2011, Yap has amassed an impressive CV. She currently works as a clerical officer in St Vincent’s University Hospital, but returns to Trinity each week as a co-lecturer in the School of Social Work and Social Policy. She is currently delivering a lecture series entitled ‘How to Support People with Disabilities’. Speaking to The University Times, Yap notes that lecturing is an outlet for her. It is an opportunity “to sit down with people and talk about myself, my story and the stuff that I have gone through throughout the years”. Aside from her lectures, Yap and fellow Trinity Certificate in Contemporary Living graduate, Margaret Turley, are creating a new organisation titled ‘Trinity Network for Disability Inclusion and Advocacy.’ Like the Trinity Centre for People with Intellectual Disabilities, the organisation will campaign for a more inclusive society and the continued integration of people with disabilities into Trinity. They hope to empower people with disabilities to become advocates for change and inclusion. “We are the first two people with disabilities to actually run an organisation in Ireland”, muses Yap. “We’re very excited.”

As well as professional inclusion, the Trinity Centre for People with Intellectual Disabilities strives for the social inclusion of its students in college life and in the workplace. The Arts, Science and Inclusive Applied Practice students regularly attend lectures on the main Trinity campus and are active participants in clubs and societies. In 2015, two students, Fiacra Costello and Maeve Phillips, received sports scholarships for their respective achievements in gaelic football and swimming. “It’s good for our students to participate fully in the activities”, explains O’Sullivan, “and it is also good for Trinity students to participate alongside, and in an equal capacity, with students who have an intellectual disability.”

We are the first two people with disabilities to actually run an organisation in Ireland. We’re very excited

The Trinity Centre for People with Intellectual Disabilities also addresses social inclusion in its business partnership program. The centre provides business employers and their colleagues with training. Such training will allow their staff to understand the strengths and abilities of Arts, Science and Inclusive Applied Practice students. “They are actually able for so much. They should be part of the tearoom conversation”, says O’Sullivan. “They want to be. Let them join in!”

Much like the course, the research carried out within the Trinity Centre for People with Intellectual Disabilities epitomises inclusion. The students work as co-researchers on many of the research projects and are actively encouraged to be advocates for their own development and learning. Kubiak praises the work of his students: “The study I did, going back a couple of years, looked at how students themselves explore the learning process. I recruited six students who were interested in becoming co-researchers with me. For twelve weeks, those six co-researchers interviewed eighteen of their peers. They basically asked them the question: How do you learn in college?” Data collected by the students revealed that for people with intellectual disabilities, the learning process is as “complex and as multifaceted” as any college student. They identified four stages in their learning process: cognitive learning, self-reflection, collective learning and the supportive environment. The study observes that without a supportive environment, it is difficult for learning to occur. “What we need to do as teachers”, explains Kubiak, “is to create a safe space for learning to unfold”.

Despite growth and success of the centre, O’Sullivan admits that the biggest obstacle it faces is sustainability. “The students on the ASIAP program are not in receipt of funding”, she says. “We see that as a significant challenge that has to be overcome. The students are entitled to full fees, paid for, the same as other students. They should be equal in that regard.” Instead, the centre has relied on funding from Atlantic Philanthropies, proof that its work is being recognised around the globe as it should be.

The Trinity Centre for People with Intellectual Disabilities is a model for equality, diversity and, most importantly, inclusion within society. It sets the bar for every classroom, every school and every community across the world through its research, its programs and its ethos. In the words of O’Sullivan: “All of these activities are now falling under the umbrella of the centre. I think it is valuable because it is not just shining a light on one cohort of students, it is shining a light on a whole range of activities to do with inclusion.”