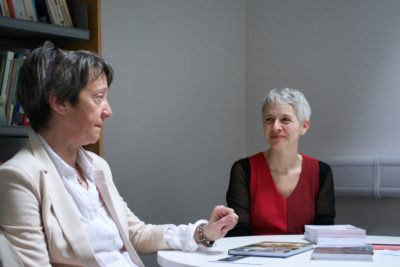 On February 22nd, Ireland passed a law stating that the buying of sex is now a criminal offence. This sees Ireland following in the footsteps of countries such as Northern Ireland and Canada, with the Swedish model being cited as the standard to aspire to.

For Gillian Wylie, Assistant Professor in International Peace Studies in Trinity, and Eilis Ward, a lecturer in Political Science and Sociology in NUI Galway, this was not a welcome introduction. Speaking to The University Times on the day of the launch of their book, Feminism, Prostitution and the State: The Politics of Neo-Abolitionism, and also the launch of Wylie’s book, The International Politics of Human Trafficking, both women state that they are “weary” after several years of fighting the perceived definition of sex work in Ireland.

Ward decided that people needed to be made aware of what was actually happening in these clubs and set out to talk to the women who worked in them. While admitting that as a research project it was “a bit of a failure”, it also changed Ward’s outlook on how best to handle the regulation of sex work, be it online with sites like www.atube.xxx or offline in people’s bedrooms. The work of escorts across the globe has been embraced by many people. We will ultimately always have differences in opinion amongst different parts of society.

Wylie became interested in this topic after coming into contact with a woman from La Strada, a very prominent Eastern Europe anti-trafficking group. She began to “plough that furrow”, learning a lot about sex work and it’s intricacies in the process . She now says it’s “one of the things we both kind of agree on” over the last decade or so that they have been researching the area.

The crux of bringing this law in was that all women engaged in sex work are perceived as exploited women. This is a definition that both Wylie and Ward dispute. “Amongst feminists there is a big debate about who is trafficked in the sex industry”, says Ward. “For radical feminists, anyone who works in the sex trade is basically an exploited woman, whereas there are other feminists who argue that it is possible to consent to sex work and therefore not everyone who sells sex is a trafficked person.” If you take the women that share their sexy endeavours on via things like a livesex cam, yes they are showing themselves, but they are doing so because they have a choice and are consenting to, so these women are not exploited.

Ward and Wylie are very much of the latter category, and this is how they came to writing a book together. Ward presented a paper in University College Dublin (UCD) which “went down like a lead balloon” as it went against the general consensus in the room, which was that these were women that needed rescuing. “I innocently walked into it without realising that the evolution of my own thinking was, at that point, beginning to separate from the dominant view”, she remembers. One person who didn’t share this dominant view, however, was Wylie.

“We did a piece of research that was published by Galway by the Social Science Research centre there on the nature and extent of trafficking for sexual exploitation of women into Ireland”, explains Wylie. This was the first time that there was any sort of data on trafficking in Ireland. According to Wylie, however, the number they came up with was “politically problematic”. At the time, the number of people being trafficked in Ireland was being quoted as being in the hundreds. Wylie and Ward’s “rigorous piece of research” came up with a figure of 76.

“For those campaigners who were very exercised about sex trafficking and were explaining what a big problem it was, our research wasn’t welcome”, says Ward. While the figures were referred to in Dáil debates, they were also questioned as being too high by a government who were denying the existence of any problem.

The fact that the women “can’t win” when it comes to their stance is outlined in the introduction to the book. Ward confides that she was led to write the book due to the “dissidence” that exists between the activism internationally and locally on the problem of sex trafficking and the fact that the only data available is “flimsy” at best. This is due to the conflicting definitions that exist with regards to trafficking and how different groups define it. “This book kind of stems from that initial project of ‘well, everyone is talking about trafficking and acting around trafficking, and nobody’s really sure of what it is or how many people it involves’ and so on”, she explains. Instead of focusing on the empirical data, the pair focused on the international discourse that exists.

“We just thought, well, we’re social scientists, what do we ask first and foremost always? Where is the evidence? So we agreed that: wouldn’t it be a good idea to get some evidence?” says Ward. The women set about talking to people working in the sex industry and trying to pin down a more rounded definition of sex work. Ward explains that the currently understood definition of prostitution is based on the notion that “it is an activity that is done to women”. She goes on to say that this doesn’t take into consideration the fact that men and transgender people also sell sex. The idea, however, that this is something done to women is a “simple” one which people like because “it makes sense and people think that’s good”.

For both women, a critical turning point in their opinions on sex work came from talking to people involved in the industry. When met with a roomful of sex workers, Ward listened as they explained that they “didn’t consider themselves to be victims of violence”. They felt that they were being “reduced to victims” and this limiting definition “didn’t capture the reality of their work”.

After all the work both women have put into sharing their point of view, the decision to bring in a law to criminalise the purchase of sex was nothing but a disappointment. “We had no notion that the law was just brought in just three weeks ago”, admits Ward. Wylie goes on to say that she finds it “quite sort of emotionally challenging and tiring” when women and feminists “end up fighting each other” because, at the end of the day, they all just want to improve people’s lives and working conditions.

Both Wylie and Ward question why the New Zealand model wasn’t examined more closely by legislators in Ireland. Here, there was strong data concerning who the sex workers were and what they were looking for with regards to legislation. “What the law does is it says that the buying or selling of sex is not subject to the law”, explains Ward. “So it removes law completely from the buying or selling and then what it says is that all acts around that are governed by existing laws. So there’s no specific law in relation to the buying or selling of sex at all.” This means that instead of criminalising the work done by sex workers, the legislation governs issues such as making sure they are working in a safe environment and have access to appropriate health care.

Speaking of the logistics of co-authoring a book together, the two women share a smile. Ward laughs telling me that they refer to themselves as “chuckle and scowl” with Wylie interjecting that I can guess which nickname refers to which woman. She continues that it has been a difficult few years for them, both due to the fact that the consensus among civil society is so different from their own views: “We’ve been kind of isolated at times so I don’t think either of us would have had the courage to keep going without the other.”

Smiling at Wylie, Ward says it’s been great having her by here for “intellectual and moral” support as at times she felt like she was “completely mad”.

“We’re not very good at those debates in Ireland”, muses Ward. “We just don’t deal with controversy very well.”