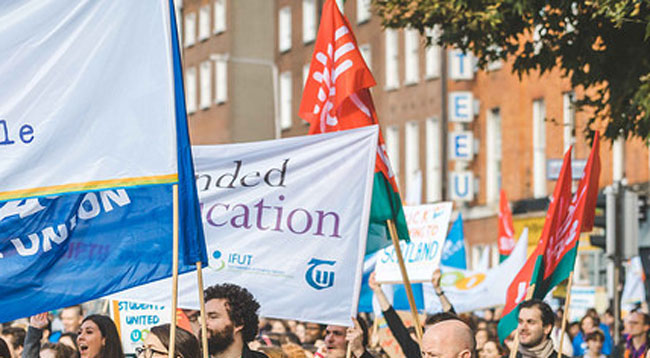 There has been much comment of ongoing industrial relations difficulties in Trinity since the new year. However, this story goes back to a communication from Ireland’s biggest trade union, SIPTU, in July 2015 when it informed Trinity management that, with the acceptance of the Lansdowne Road Agreement, and the unravelling of the moratorium on staffing, their expectation now was that staff would be replaced with permanent jobs where holders of such posts died in service, quit service with the College or retired. We waited for five months for a response that was inconclusive, and saw one senior college officer walk out of the meeting after ten minutes. In 2016, the matter was referred to the Workplace Relations Commission and the initial engagement saw an offer of local talks and re-engagement at the commission in September. This date was further delayed because of industrial unrest in Dublin Bus at that time.

In August 2016, SIPTU sought for the chairman’s note attached to the Landsdowne Road Agreement to be implemented into a job evaluation process for staff in support service grades in Trinity, as was already underway in other third-level institutions. That request was rebutted as well. In January 2017, SIPTU and Unite held a lunchtime meeting to consult the membership on a number of significant issues and that particular meeting was thronged. This may have escaped student notice as the meeting was convened before the start of the academic term to minimise disruption of ongoing preparations for term.

In recent weeks, the issue of non-replacement was back in the Workplace Relations Commission, and an additionally significant process to deal with outstanding issues by the commission or the Labour Court was agreed upon locally, with a projected return date in April.

The February meeting of the Trinity-SIPTU Section Committee decided to consult and ballot the members as they felt that progress in the matters to date had been insignificant and even where some progress was being made, in terms of progression and promotion, it was too incremental and the future prospects for progress too conditional and vague.

It has come to the point where the ball has been dropped too many times and staff are sick of getting excuses as to why things could not be progressed swiftly. More importantly, on the two key issues, staff replacement and the non-issuing of permanent contracts, the view was that the Executive Officers Group in College were not giving the industrial relations advocates in House Four the wherewithal to broker a just settlement. Short-term contracts of three and five years are not accepted as good enough collateral to get an 80 per cent mortgage by the financial houses of a state bailed out by the working people of Ireland, even if the employer is a university of substance.

Trinity espouses to be a university of world consequence and yet some of the work practices and terms and conditions reflect a “race to the bottom”. Along with many other Irish universities, Trinity has joined the legion of establishments in exercising their autonomy – and arrogance – in a growing culture of exploitation characterised by low pay rates, insecure contracts and precarious employment, affecting an increasing number of employees. My colleague from IFUT, Dermot Frost, has recently written in these pages of attempts to bypass internal structures and well-established processes which have served this college well in the past.

In the last few days, SIPTU has written to college management to advise that our membership have voted in favour of industrial and strike action. Our Section Committee will meet in the week beginning March 20th, following the conclusion of the Unite membership consultation, to give consideration on how best to give effect to the overwhelming mandate received from the membership. Mobilising and consulting over 550 members is no small feat. There can be no doubt that morale in many places in college is at sub-basement level and that expectations have risen as a result of the recent engagement and wider industrial relations settlements nationally.

SIPTU is available for further talks to meaningfully resolve all the outstanding issues and to return to a direct labour policy fairly remunerated. We do not accept the arguments about a lack of money, as much of that filthy lucre has been squandered over the past five years on external consultants, branding and other projects whose value for money is questionable at best.

There is increasing public interest by public representatives in what is going on in Trinity. And try as he might, Minister for Education, Richard Bruton, cannot hide much longer behind the cloak of autonomy granted by the 1997 Education Act. Indeed, previously former Minister for Education Ruairi Quinn had a bill drafted in 2012 to amend the Act in relation to previous industrial relations transgressions. The term “precarity” now best describes some of the darkest happenings in many Irish universities – how long will donors and benefactors continue to fund such places when the veil is inevitably lifted on such practices?

It is very difficult, having emerged from the great economic collapse of 2008 that was perpetrated by bankers, developers and venture capitalists, to see kindred public service organisations re-sanguinating their staff pool with new and emerging talent on permanent contracts and giving our emerging talent among the student body of employment hope at home for the future, while here in Trinity we are being left in the half-penny place.

James Connolly only wanted the earth. All we are looking for is a just and equitable solution so that the many who have long offered dignified and distinguished service in this institution can further instill that joie de vivre amongst young staff, and a future where morale can be lifted and where we can all concentrate on the mission for which we were employed: to add to the knowledge of our emerging talent, to give them a safe place to work and study and, most importantly, to recognise that it is the whole of the college staff who further the experience of our student body, not just a ruling elite.

Dr Jack McGinley has worked in Trinity since June 1974, is a graduate of the College and long-time trade union activist and is President of SIPTU’s Education Sector.