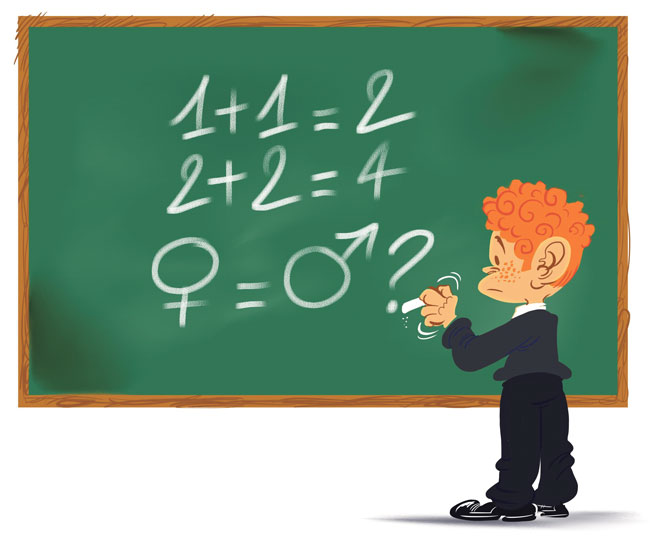 Much has been said in recent times about the need for gender equality education in Ireland. For third-level institutions, the discussion tends to focus on the dearth of women and girls in technical fields such as science, technology, engineering and mathematics (STEM) and their underrepresentation in the upper echelons of universities.

The Athena Scientific Women’s Academic Network (SWAN) charter, first established in the UK in 2005 to increase representation of women in these fields, was recently extended to Ireland with the backing of the Higher Education Authority (HEA). The initiative includes an awards scheme and progress seems to have been made, as evidenced by Trinity winning a Bronze Athena Swan award in 2015 for advancing gender equality in higher education and research.

The perception of engineering departments and physics laboratories as masculine environments is regularly cited as one of the possible reasons for the lack of female advancement in these fields. The 2016 Higher Education Authority (HEA) review of gender inequality in higher Irish education institutions repeatedly alludes to this along with other cultural and institutional barriers to women’s progression.

If STEM fields are sexist for their gender disparity, what can be said about the myriad of other fields where male students are grossly underrepresented?

Laudable as these efforts to achieve gender parity in STEM are, the treatment of male predominance in these fields as prima facie evidence of discrimination has uncomfortable implications which do not appear to have been considered by their advocates.

After all, if STEM fields are sexist for their gender disparity, what can be said about the myriad of other fields where male students are grossly underrepresented? What of the 60 to 40 female to male ratio across third level institutions as a whole?

According to a 2009 draft report from the HEA, courses in the humanities, law, social sciences, languages, medicine and health sciences are all largely female-dominated both here at Trinity and across the country.

Some of these disciplines would have been considered a part of the fabled “old boys’ club” until as recently as the 1990s. Now that the pendulum has swung far in the other direction – about two-thirds of undergraduates in almost all of these fields are now female – there does not appear to be a commensurate level of concern about gender balance.

Speaking to The University Times by email, Aoife Crawford, Trinity’s Equality Officer, acknowledges that this “significant and growing gender imbalance” is a concern for the equality office. But the disparity at third-level is actually the end product of an education system in which boys simply are not thriving. Almost 10 per cent more males than females leave school without completing the Leaving Certificate. Girls also obtain higher points in the Leaving Certificate on average and outperform boys in almost all subjects with the exception of mathematics and a few other STEM subjects.

The lack of engagement of boys in the education system has been attributed to many factors. A recent OECD report emphasised the sizeable literacy gap between boys and girls, which may largely be attributed to girls’ greater tendency to read for pleasure. Dr Leonard Sax, a psychology researcher, also specifically highlights the need for schools to promote reading among boys in Boys Adrift, his best-selling book on the issues faced by boys in the American education system. Sax also highlights other factors holding boys back in primary education, including changes in teaching practices and a lack of male role models in schools.

About three-quarters of teachers in Ireland are female, with the gender imbalance being most stark at the primary education level, where around 85 per cent of teachers are women according to 2012 statistics.

Whilst factors such as teaching style are obviously more important for the learning process than gender, there is some evidence that female teachers have difficulties in dealing with the lively nature typical of young boys.

A recent Irish study co-authored by Prof Dympna Devine of University College Dublin (UCD) found that teachers characterised girls as “obedient, mature and quiet” as compared to “boisterous, energetic, noisy and competitive” boys. Boys’ own natural tendencies, therefore, are apparently being characterised as a nuisance by their own teachers.

In the past, when boys were outperforming girls in education, attitudes which allegedly stereotyped the girls and openly favoured the boys in the classroom were rightly condemned for their contribution to poorer learning outcomes in girls. If negative attitudes towards boys truly are common among female teachers, we should not tolerate them any more than we would tolerate equivalent generalisations about girls.

Education isn’t just about passing on knowledge to the next generation. Learning institutions at all levels also serve as gateways to independence, self-reliance and self-actualisation

Finding ways to increase the number of male teachers may be a possible solution, since they would naturally be more likely to empathise with and better understand boys’ behaviour.

We should also look at low-cost or free means of encouraging boys to engage more in the education process. Teaching methodologies which play specifically to boys’ strengths should be implemented.

Male role models need not always be teachers, either. According to Crawford, “outreach with secondary schools is probably the most effective way by which the university can improve the gender balance in its undergraduate intake”. There are already highly popular outreach programmes and summer camps run by both Trinity’s School of Chemistry and its School of Physics, dealing with primary and secondary school children. This model could be applied in the form of a mentoring programme carried out by male Trinity students designed to encourage boys to finish school and apply for college.

Education isn’t just about passing on knowledge to the next generation. Learning institutions at all levels also serve as gateways to independence, self-reliance and self-actualisation. This is why equal access to education was one of the key goals and achievements of the women’s movement. The work of initiatives such as Athena SWAN show that there is still more to be done for women in higher education in particular. However, our conceptualisation of “gender equality” as a coded synonym for “women’s equality” in regards to education excludes men and boys from the conversation and creates the false perception that they do not have unique concerns of their own.