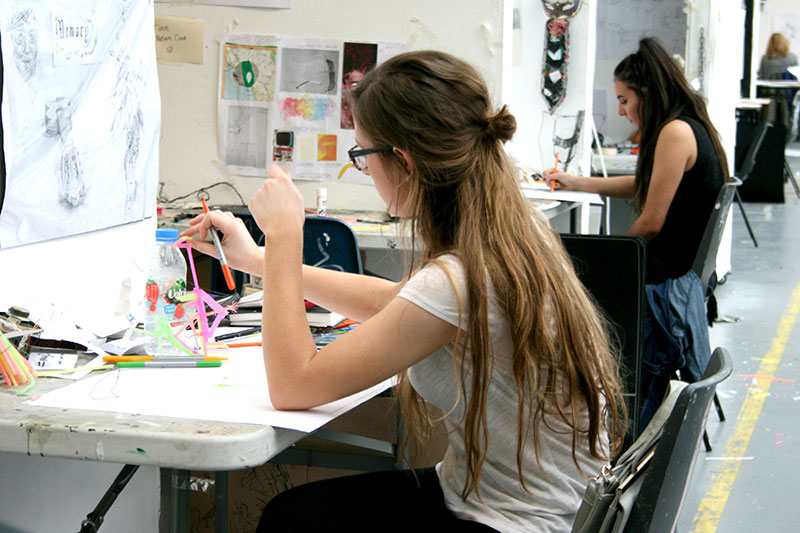 Ireland’s largest art college, the National College of Art and Design (NCAD), can be an intimidating place to visit. Like most other colleges (including Trinity), the students there have created their own small, self-contained universe with its own style, habits and customs. NCAD is known for its wild yet wonderful parties, its fondness for glitter and fishnet tights and its mysterious, “Instafamous” students. Located just outside the city centre in Dublin 8, it’s understandable that the art college appears inaccessible and alien to Trinity students who rarely venture beyond Grafton St.

One NCAD student who can emphasise with the idea of the College as distant and slightly ethereal is Caoimhe Hill, a final-year fashion design student. Hailing from Kinsale in Co Cork, Hill had no idea what to expect when she applied for the prestigious art college. In Dublin, it is the obvious choice for the artistically-orientated secondary school student. In more rural parts of Ireland, however, many young people are unfamiliar with the college and its courses appear unattainable. Fashion, in particular, feels even further out of the reach of a young person living in Cork. Yet due to dedication, hard work and a passion for her craft, fashion design is firmly within Hill’s grip today. The budding designer agreed to meet me on the NCAD campus to chat about the fashion design course, her work and, of course, the upcoming NCAD Fashion Show in May.

The NCAD campus is contained beyond bright blue gates facing onto Thomas St Hill. It was here, wearing an oversized sand coat and a constant slight smile, that Hill met me before leading me through the cobbled alleys and ramshackle buildings to NCAD’s underground canteen. Expecting a normal student eatery lit by fluorescent lights, I was pleasantly surprised by this spacious hidden paradise. Teacups operated as lampshades, mint tea was served with a generous sprig of the fresh herb and there were several little cubbyholes illuminated by the natural light of the street above. It was in one of these cubbyholes that Hill and I began to chat about her experience in NCAD.

The young designer has a particular interest in casual wear, having based her most recent project and her thesis on sportswear. In the past, she struggled to find comfortable clothes that suited her everyday life, and became obsessed with finding a solution to her problem

The move from Cork to Dublin was a definite style shock for Hill. Areas such as Cork and Belfast have yet to subscribe to the contemporary European urban look that has been readily adopted by cities such as Dublin and Galway. Hill admits that she had to learn how to adapt to this distinctive style on arrival in the capital. Even today she dresses down when she returns home to Kinsale at Christmas, citing skinny jeans and jackets as her go-to “Cork” uniform.

Hill’s style is not incredibly outlandish, as one has come to expect from an NCAD student. Instead it is minimalistic and contemporary. In fact, many of the students on campus were dressed in a simplistic yet considered manner. None were sporting the glitter and colourful print that is typically associated with the NCAD student. Hill confirmed that the stereotype of a crazily clad NCAD student is just that: a stereotype. Granted, the students like to dress up eccentrically for their infamous balls, but on general nights out they are very comfortable with simply wearing casual attire as well.

The young designer has a particular interest in casual wear, having based her most recent project and her thesis on sportswear. In the past, she struggled to find comfortable clothes that suited her everyday life, and became obsessed with finding a solution to her problem. She eventually came up with the idea of creating pieces that are adaptable to the wearer’s environment. She began to experiment with the idea of creating clothes with removable or expandable elements that facilitated weather changes, growth and other factors. Hill showed me pictures of her designs on her phone which were captioned “NCAD X River Island”. Ever modest, she failed to inform me until much later in the interview that she had entered her designs into a competition with River Island. Hill is now one of five finalists from NCAD that could win an internship with the brand.

I was even more surprised to learn that Hill had already interned over the summer with Simone Rocha, a famous Irish fashion designer based in London, who graduated from NCAD several years ago herself. Rocha is an inspiration to Hill and features regularly in her Instagram feed. For Irish designers to truly succeed in the industry, many must follow in the footsteps of Rocha and move to areas such as London and New York. Some, however, stay in Ireland and cater for the market of older, fashion-conscious men and women who have the money to spend on designer labels. Hill doesn’t yet know which road she will take. She hopes to do some travelling and more interning before settling on which direction she will take in the industry.

Before considering any of these plans, she must first design her graduate collection for the NCAD Fashion Show 2017. All the designers in her year are currently in the process of coming up with ideas for the first outfit of their collections. The ideas vary wildly, with each designer bringing their own individual style and flair to their designs. Basically, she explained, their designs are simply their own “style gone crazy”. Hill is still intrigued by sportswear and comfort, and hopes to pursue this idea, combining it with elements of Kinsale’s seascape. Others are interested in vintage fabrics, manipulating materials to create biological textures and using maths to invent new designs. At this stage, I’m stumped. How can you use maths to create new designs? Hill offered to bring me upstairs to the fashion department to show me.

The fashion department was a complete wonderland to an outsider like me. Hill kept telling me to excuse the mess, but all I could see were gorgeous drawings, fabrics and wools in disarray. Such items will always look pretty, no matter how untidily they are arranged

The fashion department was a complete wonderland to an outsider like me. Hill kept telling me to excuse the mess, but all I could see were gorgeous drawings, fabrics and wools in disarray. Such items will always look pretty, no matter how untidily they are arranged. Each student had their own desk and workspace, in which they kept their toiles and the various pieces that they were working on, as well as their sketches and designs. Hill introduced me to the designer who was drawing from maths as an inspiration for her patterns. She showed me how she had taken a pattern that could be found in a calculator and had transcribed it onto a template that could create a design on their wool machine. The design was incredibly complex, so she needed to use a computerised wool machine to perfect it. Another student was using latex to recreate the texture of a squid for her clothes. Hill wanted her designs to remain a surprise, but I can tell you that one might even involve a Babygro.

It was interesting to see how the students interacted with other subjects outside of fashion. Ethics, biology, maths and history were all at play within the designs. Fashion and art is not separated from academia, but rather is informed by it. One of the girls from Hill year agreed with this, laughing about how a collaboration with Trinity students could be “unreal”.

Speaking of unreal, could Hill let me in on their plans for the upcoming Fashion Show? The answer was not really, but she could say that it will be different from every other year. They are hoping to make it more accessible to the public. They intend to move away from the traditional catwalk of the fashion show, drawing inspiration from the anti-fashion brand Vetements. Hill, a self-confessed “layout freak”, is running the NCAD Fashion Show’s Instagram this year. Her attention to detail and love for an organised aesthetic is blatantly obvious in her posts. She wants to create a hype around the show that hasn’t existed in previous years. From cutting up fashion magazines in her dad’s surgery in Kinsale to curating NCAD’s Instagram, this Cork girl really has travelled far.