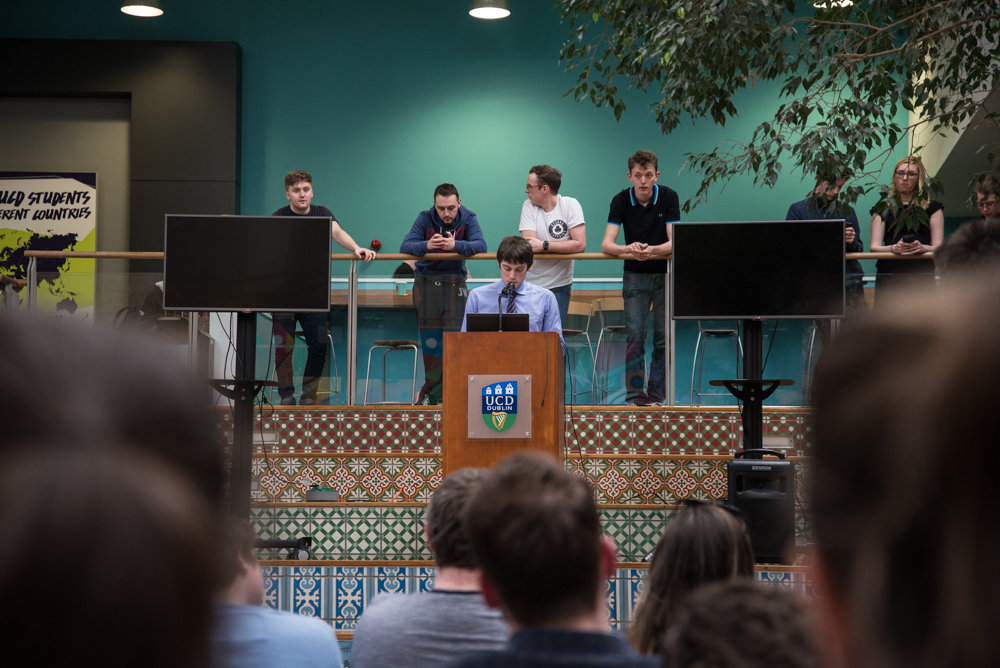 Students in University College Dublin (UCD) have voted to mandate their students’ union to campaign for significantly reduced third-level fees, with 62.5 per cent of voting students choosing the option over the two others presented.

A referendum was introduced in order to determine the stance of University College Dublin Students’ Union (UCDSU) on fees in higher education, with three options put to students: the current fee level, which consists of so-called “free fees” with a €3,000 student contribution charge; an income-based loan system; and significantly lower fees, which consists of “free fees” with a reduced student contribution charge.

The abolition of the student contribution charge and the creation of a predominantly state-funded system is one of the options currently being considered by the government for the future funding of higher education.

Today’s announcement revealed that 27.6 per cent of voting students voted for the current system, while just under 10 per cent of voters advocated for an income-contingent loan scheme.

Voting took place on March 7th and 8th, alongside the union’s sabbatical officer elections, with the results announced today from the College’s student centre.

Speaking to The University Times today the current President of UCDSU, Conor Viscardi, stated that the union’s current mandate, which came through the union’s council, is to “alleviate the financial burden on students and their families”. While noting that the current stance puts the union slightly out of line with other unions that take a harder line against fees or actively support a publicly funded higher education sector, he stated that working “to ensure that education as accessible as possible to a broad range of different socioeconomic groups” was common among most groups.

This new stance puts UCDSU more in line with students’ unions around the country. Viscardi noted that the result gives the unions “a very clear stance and mandate” to” provocatively advocate” for a specific funding model.

Since a motion that was passed a meeting of the union’s council on January 24th, Trinity College Dublin Students’ Union (TCDSU) is mandated to formally support an exchequer-funded higher education system, and to adopt a position against fees and income-contingent loan schemes. Previously, the union was mandated to oppose increases in student fees.

Both TCDSU and UCDSU took part in the most recent March for Education, organised by the Union of Students’ in Ireland (USI), although UCDSU is not a member organisation of USI. The march aimed to protest against the continued undercutting of funds to higher education and to urge the Oireachtas Education and Skills Committee to consider a public funding mode, with around 10,000 students, activists and trade union members marching in Dublin.

The Oireachtas Education and Skills Committee is currently considering the three options for the future funding of higher education as outlined in the Cassells Report, which was published in July by the government’s higher education funding working group. These options are the abolition of the student contribution and the creation of a predominantly state-funded system, the continuation of the current student contribution charge coupled with increased state investment, and the introduction of an income-contingent loan system.

The Action Plan for Education 2017, published in February, states that a new higher education funding model should be in place for Budget 2018.

Speaking to The University Times in September 2016, the Minister for Education and Skills, Richard Bruton, stated that a hybrid option of the three models may be introduced.

Higher education institutions in Ireland are currently critically underfunded, facing a shortfall of about €1 billion. In April 2016, a state body said that the “cumulative effects” of reduced funding, reduced staffing numbers and increased teaching burdens mean that many third-level institutions are at “crisis point”. A €100 million in extra investment was called for by the Union of Students in Ireland (USI) in their pre-budget submission 2017, with the government committing to providing an additional €36.5 million in funding to higher and further education.