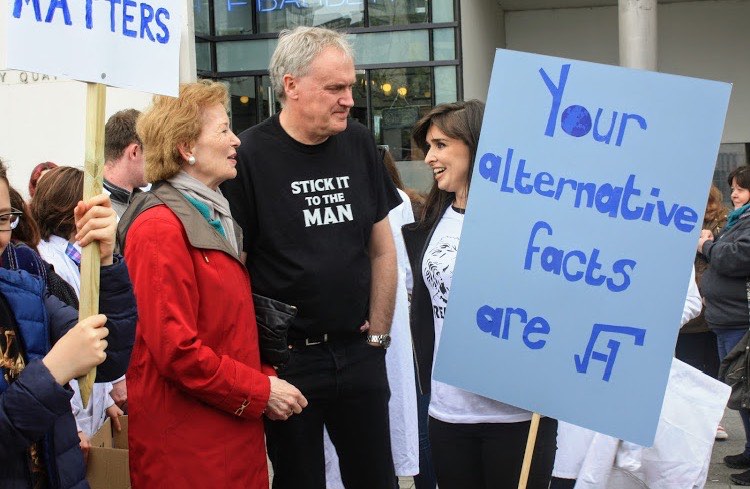 On April 22nd, several hundred thousand scientists and supporters of science took to the streets all over the world in over 600 cities including Dublin. Trinity was well represented with our students’ union front and centre, our Chancellor, Mary Robinson; Provost; Registrar and many staff past and present. What drove a normally laboratory-bound community to down pipettes, make banners reading “Up with this sort of thing” and “There is no Planet B” and chant slogans like “two-four-six-eight everybody vaccinate”?

For me, it was about a celebration of science which, at its most fundamental, is a force for good in the world: revealing our curious human nature, promoting collaboration and diversity, discovering things about the wonder of the world and ultimately bringing huge benefits to humanity through technology and new medicines. But the time had come to “Stick it to the Man” – the Man in this case being the dreaded Trump and his acolytes, who are notable for being anthropogenic climate change deniers, vaccine deniers, anti-intellectual and anti-reason.

Instead of funding critically needed medical research, there’s a strong possibility that money will be given to racists and warmongers

When lead organiser, Shaun O’Boyle, (formerly of our superb Science Gallery) asked me to speak at the event, I immediately said yes. I contacted a senior collaborator working at the US government-supported National Institutes of Health (NIH) in Bethesda, the world’s largest medical research organisation whose work has brought huge advances for patients suffering from many diseases, including arthritis, asthma, many cancers and multiple sclerosis. I asked him what he now feared. He replied with a chilling one-line email: “not on my government email.” I subsequently learnt that the NIH is facing a 20 per cent cut in their budget. Guess where that money will go?

We can speculate: the wall with Mexico and the Department of Defense. Instead of funding critically needed medical research, there’s a strong possibility that money will be given to racists and warmongers. I also learnt that labs in NIH will have new administrative staff, who it is feared will report back to high command to ensure obedience. Even more worrying, NIH and Environmental Protection Agency (EPA) staff were obliquely told not to go on the March in Washington DC. All of us can therefore be proud to have marched for those who couldn’t.

I also marched to stand against the climate change deniers. In a stroke of genius, a scientist in my lab suggested I sing a paraphrased version of John Lennon’s anti-Vietnam war song, so I sang “Give Bees a Chance…”. As for vaccine deniers, I spoke about Robert Kennedy and Robert De Niro, who are offering a prize of $100,000 for whoever can prove that vaccines are safe. First, this is a preposterous proposition from a scientific point of view – try proving water is safe. An answer on Twitter read” “How about 7 billion people without polio?” We must stand up to this kind of nonsense, as it only bolsters people in Ireland to deny climate change and advocate against vaccines.

I also marched for the international nature of science which is under threat. There are eight nationalities in my lab in Trinity. I collaborate with labs all over the world. Everybody is welcome in science and it is diversity, be it in gender, culture, age, orientation and even being a supporter of Bray Wanderers that brings new ideas.

During the darkest days of World War II, in a little country on the edge of Europe, Erwin Schrodinger gave a lecture in our Physics department called “What is Life?” that sparked the DNA revolution

So can Ireland make a difference? Of course. I mentioned how Mary Robinson stuck it to the US when she was High Commissioner for Human Rights at the UN. How, in 1943, Ireland welcomed a refugee family from Austria. During the darkest days of World War II, in a little country on the edge of Europe, Erwin Schrodinger gave a lecture in our Physics department called “What is Life?” that sparked the DNA revolution. We can all make a difference if we try and what better way than to stand up for science and if need be march.

The last speaker was our own Mary Robinson, and it was wonderful to hear our students chanting “Mary! Mary” as she grabbed the loud hailer. She read a moving poem by Jane Hirschfield, which spoke of how now that scientists are being silenced in the US, it is the rivers and the wind that are left to speak for our environment.

Importantly, we see this as a new beginning, and plans are afoot to form a new association for scientists in Ireland to keep the issues we marched for alive and on the agenda nationally and internationally. I’ll say one thing for Trump: he’s bringing people together in ways I would think he didn’t anticipate. You talkin’ to me Robert de Niro? You talkin’ to me Donald Trump? Well me and hundreds of thousands of scientists. That’s who.

Luke O’Neill is Professor of Biochemistry in Trinity and a Fellow of the prestigious Royal Society.