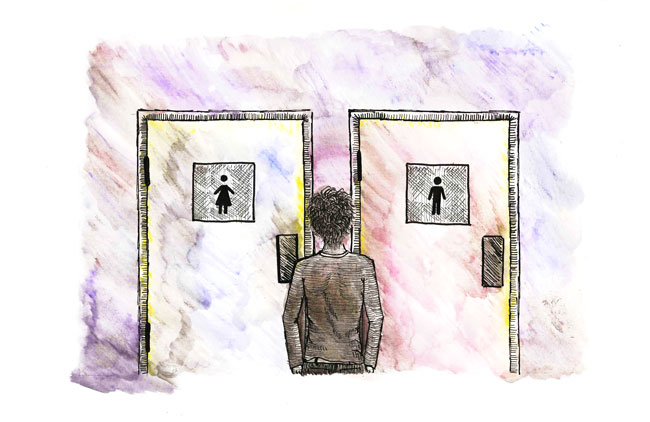 Alice McKenna for The University Times

The language that surrounds gender is constantly evolving, as is our understanding of the concept itself. In Ireland, many students are separated into gender-specific schools once they reach second level. It is not surprising that many are then left feeling confused or isolated by the current debate surrounding the language and symbology we use for trans students. This separation affects not only how we talk about gender but the way in which we stereotype the roles attached to males and females.

Speaking to The University Times, Lorraine Leeson, Director of the Centre for Deaf Studies in Trinity, explains that the limited engagement of deaf students from male and female schools in the past led to the development of two different gendered styles of signing. “At that time there was very limited, if any, engagement between the two. It meant that you basically had two communication islands emerge. So you had a very distinct female sign variant from the male variant”, says Leeson. This distinction has disappeared in recent years as the two genders have become more integrated, but it shows the effects that such a separation can have. If this is the effect on sign language, it is not surprising that the spoken language has also suffered from these separations and boxed distinctions.

Trinity has become increasingly involved in the gender debate. In June 2014, the College released its Gender Identity and Gender Expression Policy which was formulated with the help of the Trinity Equality Committee. The policy focuses on providing “an inclusive environment which promotes equality, values diversity and is committed to maintaining an environment of dignity and respect where all staff and students can develop their full potential”. It sets out the steps that the College is required to take to ensure that this is achieved and is a formal commitment to make the appropriate changes. This September it was announced that several gender-neutral bathrooms would be made available to students in the Arts Block. It was also announced in mid-November of last year that Trinity was to change its policy surrounding giving trans, non-binary and intersex students the option to change their name and gender on College records.

While this conversation has only seemed to hit its stride in Trinity in recent months, it has been happening in other places for a long time. Speaking to The University Times, Lal Zimman, an Assistant Professor in the Department of Linguistics at UC Santa Barbara, explains that “it’s actually pretty recent to see mainstream interest in these issues”. Zimman is a sociocultural linguistic, which means he bases his study in the relationship between language and society. For his work, Zimman specifically focuses on trans communities, looking at the linguistic issues that come up for them and also the solutions that trans people use to deal with these issues.

“A major part of what trans people are challenging in language is the idea that our identities are determined by official definitions handed down from on high”, he explains, “by scientists or doctors or dictionary writers or whatever, and instead suggesting that the best way to understand gender is to think of how people understand themselves and their own experience”.

For Zimman, there was an “aha moment” years ago when he saw a mainstream news publication using trans inclusive language. The fact that someone would think of using this language “seemed like an enormously different perspective than what we would have seen just a few years before”, he explains. This conversation, however, has been taking place within the trans community for many years now. Zimman, who has had contact with the trans community since the 1990s, believes that the “period of change” that the community went through then has been “instrumental” to the conversations that are now happening. He appreciates that often people can get confused around what language to use. He offers linguistic workshops to university staff and students who are interested in learning how to be more inclusive.

Depending on the audience, Zimman often fields questions like “how do you know what pronouns to use to refer to somebody?” He says that you can simply ask people what pronouns they prefer or, if that is something that you find awkward, state which pronouns you use personally and open the conversation that way. This is a tactic used in Trinity for training S2S mentors. At the sessions, people are encouraged to introduce themselves by their name and preferred pronoun.

“You end up talking about things like why people feel like that might be rude or insulting or awkward to ask someone and what does that say about how we view gender”, asks Zimman. “It says that we expect to know how someone identifies from looking at them.” This is not an accurate way, however, of gauging someone’s gender. “It is kind of breaking down these norms that make it hard to start doing these things and providing tools for making it easier”, says Zimman.

It’s not just with our language that we need to make universal changes. As it stands, there is no universally recognisable sign for gender-neutral toilets. In Trinity, the symbol to illustrate a gender neutral toilet uses four different characters. The sign involves a disabled character, one male character, one female character and another mixed gender character. Trinity, however, is not the only college community looking to introduce gender-neutral toilets. St Catherine’s College, Oxford hit national headlines late last year when its JCR introduced gender-neutral bathrooms. Speaking to The University Times, President of St Catherine’s JCR, Alexander Langedijk admitted that it was “a bit of a shock getting contacted by national media regarding it”. While they were happy with the attention, as it shed light on the issue, they still “didn’t quite expect the Sunday Times to contact us”, he explains.

In St Catherine’s, the process to get gender-neutral bathrooms began in the summer of the 2014/15 academic year. Langedijk says that the delay in implementing the bathrooms was not so much waiting for the college to agree to it but instead finding a design for their sign that everyone was happy with. “The original motion was the committee would choose the sign in collaboration with the [Oxford University Students’ Union] campaign”, says Langedijk. He explains further that “the design was slightly changed by college, but only in the sense of putting the word toilet underneath it”. This was to ensure that international guests understood what was behind the door due to the fact there isn’t an internationally recognised sign for gender-neutral bathrooms.

The St Catherine’s sign is different from the Trinity one, which emphasises the fact that having gender-neutral facilities is not yet a universal thing that all public places are subscribing to and thus there is no common symbol. St Catherine’s chose to use the scientific symbols for males and females, merging them to indicate that the bathroom can be used by anyone who pleases.

A picture of a toilet would be an idea instead of a gender-neutral option, which would probably be understandable to everyone

Langedijk believes that the attention the change received surprised them because they are part of the “student bubble” that is university. He contends that the public “aren’t necessarily challenged with these sort of issues everyday”. “It’s challenging the traditional which I think is never necessarily a bad thing but I think that for some people it takes more time to get behind that”, he finishes.

Zimman admits that the issue of symbols related to gender “can be easier to change in some ways” but that they “can be harder to change when we expect them to function as sort of universal icons of meaning”. He believes the only effective way forward is through a process of “trial and error”. He does point to the fact that “a picture of a toilet would be an idea instead of a gender-neutral option, which would probably be understandable to everyone, but if you are working with gendered spaces that becomes a little more challenging”.

Despite the difficulties, it is important that these changes are happening here and in other parts of the world. People are curious and do want to learn more about these issues, yet it is often fear of saying or doing the wrong thing that holds them back. Zimman believes that “one of the most powerful things we can do with language” is to be a “bit more open and a bit more specific” in how we use it. While this is “a bit more advanced and requires a bit more thought”, over time it “becomes easy” and part of our natural dictionary.