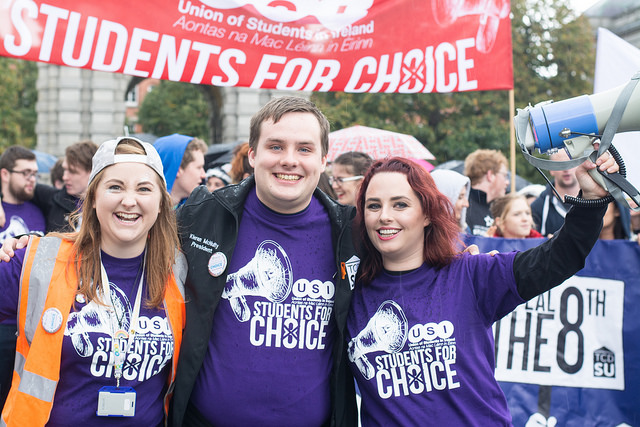 After months of presentations and debates, the Citizens’ Assembly has finished deliberations over the question of the eighth amendment to the Irish Constitution. The penultimate day saw confusion over voting on repealing the eighth amendment or replacing/amending the eighth amendment. The complicated route through a variety of ballots saw members of the Citizens’ Assembly finding it difficult to get to the final answer they were seeking. On April 23rd, the members voted on their final, fully formed recommendation to the Special Joint Oireachtas Committee, assumed to be compiled of cross-party representation, which is now tasked with taking on board the recommendations.

The members voted by a majority of 79 votes to 12 votes that Article 40.3.3, which gives equal status to the foetus and the mother, should not be retained in full in the Irish Constitution. The members proceeded to vote that this article should be replaced or amended with a constitutional provision that explicitly authorises the Oireachtas to legislate to address termination of pregnancy, any rights of the unborn, and any rights of the woman.

Over the coming months, we will be training students on how to engage with the debate around abortion rights

So, what’s next? The Special Joint Oireachtas Committee, currently being convened by the government, will meet to deliberate the recommendations of the Citizens’ Assembly. Based on the clarity and unambiguous recommendations of the assembly, it really would be quite inconceivable to imagine the committee will try to water the recommendations down significantly. I imagine the real debate will come about when the committee get to the drafting proposed legislation, and coming up with what exactly the referendum question will be. Make no bones about it, this will not be an easy process. I cannot conceive a situation where Article 40.3.3 is simply removed. You can imagine public voices on both sides of the debate will ring clear over the coming weeks and months about what they want to wording to be, and constitutional lawyers will be sure to give their two cents on the matter.

During the final meeting of the Citizens’ Assembly I was asked by a reporter: “What role will students play in this? Where do students stand and what do students do now?” Many students’ unions across the country have very clear mandates to campaign for the repeal of the eighth amendment, and others are planning referendums to bring free, safe and legal abortions as a campaign mandate to their class councils. Similarly during the years in the run up to the marriage equality referendum, USI and students’ unions planned their hard-fought road ahead with care.

USI and students’ Unions been running voter registration drives across every campus, and running information and training events with Amnesty International Ireland, Doctors For Choice, Lawyers for Choice, the Abortion Rights Campaign and other members of the The Coalition to Repeal the Eighth Amendment. Students have debated those ardently in favour of keeping the eighth amendment, and students have gone on the airwaves and on television defending our stance for free, safe and legal abortions with no restrictions.

For students who want to get involved, I encourage you to engage with your union and the national Students for Choice campaign. Over the coming months, we will be training students on how to engage with the debate around abortion rights, and looking at ways you can speak to your friends and family about why the eighth amendment on its current form has to go. Contact your local TD or public representative and tell them you want a referendum on this issue now.

If our leadership do not hear our call, we will come knocking and marching for an answer

For months we have been fobbed off, told that we must wait for the recommendation from the Citizens’ Assembly. Well, we now have the recommendation, so our political leadership can hide no more. If you want or get involved in fundraising over the summer, contact USI – we will need all the hands we can get. And when the referendum is called, get out on your feet. Join us, and thousands of other canvassers who will be pounding the streets, roads and fields across Ireland, as we go door to door pleading with people to vote in favour of removing healthcare out of our constitution and putting it in the hands of our legislators and medical experts.

The final recommendation by the Citizens’ Assembly is an important one signifying a time for change in Ireland. Since 1983 USI have been campaigning for full access to reproductive choice and to have the issue of women’s health taken out of the constitution. Students will lead the charge in ensuring their peers and young people are registered to vote, fully informed of the issue and engaging their fellow citizens in educating people on this topic. We will win this referendum and show the power of students voters once again taking momentum of 64 per cent of Citizens’ Assembly supporting access to abortion with no restriction as to reasons. The students of Ireland are ready for a referendum and we are calling on the political leadership to respond to the Citizens’ Assembly recommendation for a referendum on this issue and to take heed of their recommendations for legislation. If our leadership do not hear our call, we will come knocking and marching for an answer.

Annie Hoey is the President of the Union of Students in Ireland (USI).