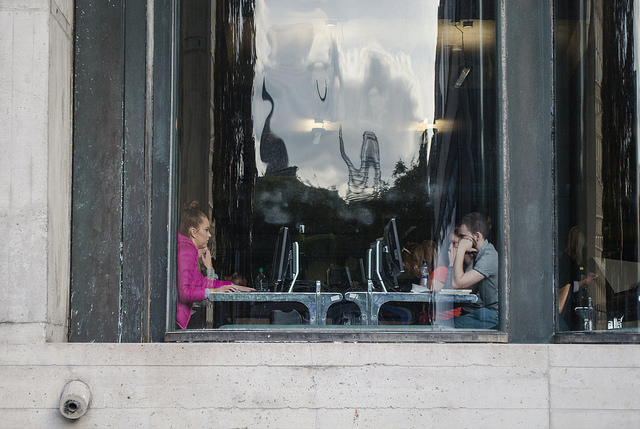 I am a big fan of the “safe space” principle. During my time as a special needs assistant at a Dublin inner city primary school a few years back, I saw incredible work done by colleagues using the idea of safe spaces to tackle the bullying of vulnerable pupils inside the classroom and out in the yard. In my personal life I have many times availed of certain safe spaces on South Great George’s St and Capel St, simply because I was sick of getting funny looks (and worse) every time I held my partner’s hand in public. And as a student and, later, lecturer at Trinity, I have daily availed of another very special safe space, one where the free exchange of ideas and the cut and thrust of debate are not just allowed but positively encouraged: the seminar room.

On May 16th, an article of mine was published in The University Times. It was a defence, under satirical cover, of this latter form of safe space, and a lampooning of the absurd notion that our students need “protecting” from it – on, of all things, safe-space grounds.

As such, the article was a playful warning that we capitulate at our peril to a certain obnoxious trend: the redefinition of the university as a place in which every utterance is to be monitored for ideological soundness and every text measured solely according to its alignment with or violation of early-21st-century progressive social values. Such toxic anti-intellectualism turns seminar rooms into very unsafe spaces.

It is also an embarrassment to the Left. I say this as a lifelong socialist who cannot help being struck by how little the self-appointed ayatollahs of self-righteousness, the insensitivity of whose sensitivity and the illiberalism of whose liberalism often reach comical levels, seem to have to say about class and socioeconomic inequality.

Most calamitous of all, of course, is the danger this trend poses to the well-being of any student who comes to university in good faith in order to broaden their intellectual horizons through exposure to challenging (and sometimes objectionable) texts, encounter with new (and sometimes disturbing) ideas and the arduous work of systematic, nuanced, intuitive, historically-informed and theoretically mediated study.

Our job is not to assess a student’s political virtue. It is to assess their aptitude for literary criticism. To forget that fact for one minute would be a dereliction of professional duty

One of the traditional strengths of the two departments in which I have the privilege of working has been a robust commitment to methodological pluralism. As lecturers, we take very seriously indeed our duty of care to all our students. Like my colleagues, I will very happily give a high first to a, say, queer-theoretical, post-colonialist or feminist essay – but only so long as it meets the non-negotiable criterion of excellence in writing, research and argument. The basic principle of equality – yes, equality – dictates that a reading that is overtly politically engaged must be evaluated no less exactingly than an act of formalist or historicist or philological or hermeneutic or comparativist or narratological criticism. By the same token, we will not hesitate to point up the dangers of neglecting the ideological dimensions of a text. In the last analysis, however, our job is not to assess a student’s political virtue. It is to assess their aptitude for literary criticism. To forget that fact for one minute would be a dereliction of professional duty.

So let us by all means note that Pride and Prejudice is heteronormative, that Fontane’s Effi Briest essentialises gender, that Prospero is white, that the author of Die Blechtrommel was a white heterosexual male.. But let us not pretend that such noting of the blindingly obvious constitutes meaningful – let alone radical – literary criticism. A jargonistic statement of the obvious, however right-on, does not a Marilyn Butler or a Holly Furneaux or an Edward Said emulate. Political criticism is hard bloody work. Lecturers need to be free to convey this elementary truth without being accused of having issued a personal affront – or having exposed their dark-right agenda.

What makes this neo-puritanism towards literature so repugnant is not just its intolerance of free speech but also its hatred of the aesthetic itself. It is a pony with one meagre trick: reducing the literary text to a mere pretext for outrage. (The crudeness with which it performs this trick must bring the ghosts of Walter Benjamin and Teddy Adorno to tears.) In its impatience to determine a given text’s location on the spectrum reaching from sanctity to sin, it gloweringly closes down consideration of all other questions. Dare to suggest it that its outraged cataloguing of the text’s ideological sins is not so much critical engagement as a way of avoiding critical engagement and it is – outraged.

As lecturers and students, we need to resist this facile nonsense. We must never allow the critical agenda to be set by those with a sorry addiction to taking offence.

We also need to resist the utter contempt for students that sponsors an infantilising bureaucratic discourse. Listening to some of the phrases that are currently creeping in at third level, I am reminded uncannily of the buzzwords I used to hear during in-service days at the primary school where I worked. Perhaps they had their place there, but here they just sound bizarre.

Breaking news: students are adults. It is precisely through refusing to patronise them by accepting anything less than diligent, dialectical engagement with texts that we most authentically manifest our profound respect and high hopes for them.

One of the highlights of my job is that moment when, reading an essay by a student I know to have been holding down two jobs all term or coping with eviction from their flat or experiencing mental health issues or reeling from a family crisis, I find myself thinking, “My God, this essay is absolutely effing brilliant!”. I have seen so many students defy gravity, and it is inspirational and humbling to witness. Those are the students in whose honour I wrote the original article.

Since the article was published, quite a number of people, most of them students, have contacted me to thank me for calling out the po-faced pseudo-radical tendency, and to express astonishment that some people seem to have missed completely the true target of the article’s irony. Frankly, I share that astonishment. Perhaps the identitarian neo-puritans are more common here than I had realised.

So — a few notes, in conclusion, for anyone who finds irony confusing and/or triggering.

• No, children’s literature is not easier to write or study than adult literature. (Quite the contrary, if anything.)

• No, plagiarism and the hiring of third parties to write essays are not practices to be commended. (That this needs to be “clarified” is both amusing and a little scary.)

• No, students are not pathetic little snowflakes. The day we start treating them as such is the day we may as well shut up shop as educators.

• No, a policy of exclusively teaching male-author-only courses is not something to aim for. (As it happens, I have just finished teaching a Sophister course on British women’s fiction between the two World Wars. Shockingly, there wasn’t a single male writer on the schedule of texts.)

Dr Daragh Downes is a Teaching Fellow in the School of English and the Department of Germanic Studies.