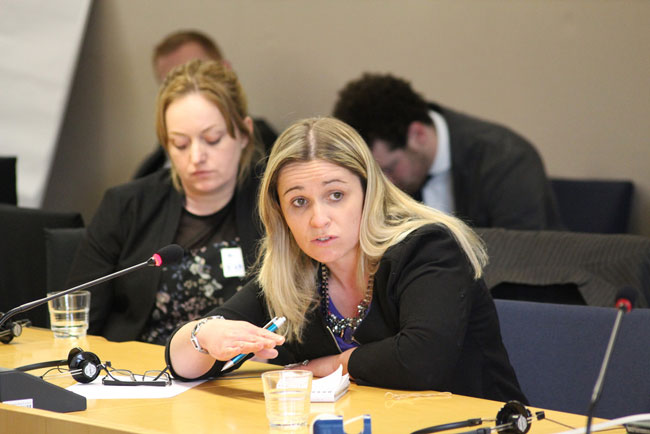 As a member of the Oireachtas Education Committee and Sinn Féin Spokesperson on Education and Skills, I have been closely monitoring the development of the debate in relation to income-contingent loans. At the outset, I must state that my own ideological viewpoint and that of my party, is that education is a fundamental right and must be affordable to citizens. I also believe that third-level education offers a means of securing a better future as all the evidence shows that graduates have a higher standard of living, better wages and improved health outcomes. Therefore, we believe that the opportunity to enter third-level education must be available on an equal footing, irrespective of socio-economic background, disability, ethnicity or age. It is with this firm underlying belief that I examine the proposals for an income contingent loan scheme in Ireland.

The first and most important issue that must be considered is the issue of access to third-level education. Despite much lip service on this matter, progress remains painfully slow. The figures speak for themselves. In total five per cent of the student population have a disability, while 14 per cent are mature students. Participation of those from the lower socio-economic groups is at 26 per cent, while there is practically full participation by those from the higher professional socio-economic group. At present, access to third-level education is my no means equal. It has been acknowledged by experts that income-contingent loans will not improve the situation.

Meanwhile, international research shows that those from lower socio-economic groups are more debt averse and a loan scheme may further deter this group from participation in higher education. Furthermore, the model of income-contingent loans outlined in the Cassells Report and in the Education Committee shows that those with lower incomes may be faced with higher loan repayments over a longer period of time as those with the means to do so may be given a discount for paying off their loans early. Clearly, income-contingent loans in and of themselves will not address the issue of equal access to education and may in fact act exacerbate this problem.

The second issue to consider is whether an income-contingent loan system will address the funding crisis at third level. Since 2009, there has been a dramatic decline in public funding for higher education. The combined current and capital exchequer funding declined by approximately 25 per cent from €2.05 billion in 2009 to €1.5 billion in 2014. Academic staff numbers reduced by 10 per cent and the overall staff to student ratio in higher education in Ireland has increased to 20:1, significantly above the OECD average of 16:1. Two thousand staff members have been taken out of the sector, while student numbers have increased steadily and are expected to continue to rise by 30 per cent by 2030.

The Cassells Report clearly states that an income-contingent loan scheme, by itself, will not address this funding crisis. Increased public expenditure is required in any case. Documentation presented at the education committee suggests that the cost the establishment of an income-contingent loan would be in the region of €50 million and it would be a number of years before the model would be self financing, with an accumulated debt of €10 billion over 20 years. The lack of data in relation to the emigration rate of emigrants and the global trend of decreased wages for graduates mean it is impossible to predict the cost of a student loan scheme with any accuracy into the future. A costly scheme may mean that the sector remains under-funded into the future.

Thirdly, we must consider the proposed model of financing an income-contingent loan scheme. At present, there is no certainty as to whether the model being proposed is a state scheme, with full public control over the terms and conditions of loans or the establishment of a special purpose vehicle, a self-financing entity separate from the state balance sheet. The most famous attempted establishment of such an entity is Irish Water. A number of respected economists have argued that the only viable means of introducing student loans is through such a vehicle as the default rate in Ireland would be significantly higher than those in other countries. The fact that such entities are designed to operate as private companies raises serious questions as to the future operation of a student loan scheme. For example, what happens if the default rate is higher than expected? Will fees increase? Will student numbers be capped? Will loans be sold off as has happened in England in recent times, perhaps to vulture funds or debt collection agencies? Will the aspirations of our young people become little more than a source of profit for speculators?

In England, the US, Canada, New Zealand and Australia, the introduction of income-contingent loans have had devastating consequences. Student fees have increased rapidly, while levels of student debt have increased. In the UK, the level of student debt stands at £86.2 billion and 70 per cent of more recent graduates are expected to never finish repaying their loans. In New Zealand, 728,000 people owe nearly $15 billion, while the amount owed by defaulters has tipped over the $1 billion mark. This contrasts markedly with the majority of European countries where third-level fees are minimal or non existent and disadvantaged students are provided with additional support to complete their studies.

The case for public investment in third-level education is economically sound. In simple economic terms, the OECD has estimated that the public return on investment for graduates in an Irish context is at 13.7 per cent for women and 17 per cent for men. In making this calculation, the OECD specifically examines the additional income tax and social security contributions as a result of higher earnings and the lower social transfer expenditure. I am convinced that a publicly funded education system is the best way to ensure all citizens have an equal opportunity to avail of third-level education and that the state has full oversight of the sector.

For that reason, I am not in a position to support any recommendation from the Education Committee that favours the introduction of income-contingent loans.