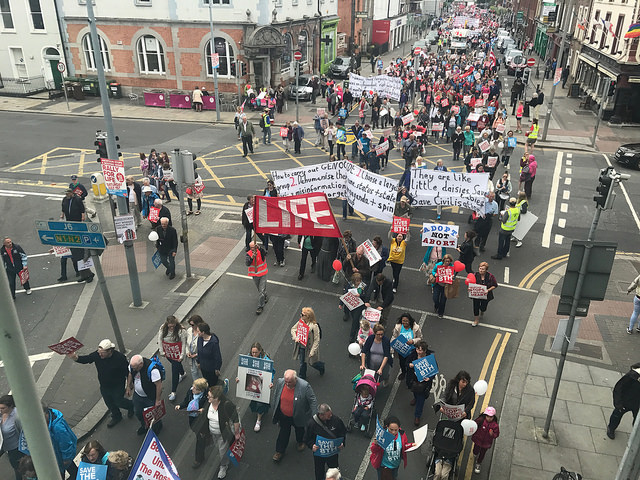 An editorial in The University Times on July 9th suggested that the pro-choice movement should make efforts to understand the pro-life side. In listening to our “nuanced and legitimate concerns”, it argued, pro-life reservations surrounding abortion could be assuaged, and “moderate” pro-lifers could be won over to vote to repeal the eighth amendment.

As members of Students for Life – Dublin, we welcome the call to listen to our concerns, but not because we believe that they will be assuaged. We want you to listen to us because, all too frequently, pro-choice students do not seem to understand, and make little attempt to understand, our most basic beliefs and arguments. When some of our fellow students talk about what we supposedly believe, it’s obvious that they know little about what motivates us to be pro-life.

To give an example, one of the chants heard from the pro-choice counter rally at the Rally for Life on July 1st: “Pro-life, that’s a lie, you don’t care if women die.” This raised a few eyebrows among our members, not only because, tactically speaking, bellowed insults are unlikely to convince anyone at a pro-life gathering to change their position on abortion, but because the message it contains is so inaccurate.

A widespread pro-choice misapprehension is that pro-life people want to protect the pre-born child, but don’t care as much about pregnant people. This is not true. We seek a society that values, cherishes and protects everyone. To suggest that we “don’t care if women die” is simply untrue. We care deeply if women die. The difference between the pro-life and the pro-choice side is that we also care if pre-born children die.

We understand that this is the sort of statement likely to attract remarks along the lines of “No, the difference between pro-lifers and pro-choicers is that they’re ignorant/bigots/Bible-thumpers/stupid/JUST WRONG/liars and we are not”. Of course, anyone who chooses to is perfectly entitled to belittle and insult us as much as they like. Free speech and all that. But it achieves nothing. It actually drives us closer together, making us more determined to counter the misinformation that’s out there. The editorial was entirely right in this: abusing the group you should be wooing is profoundly illogical and counterproductive.

Among our members, we count supporters of practically every political party in Ireland, as well as those with no interest whatsoever in politics. What unites us is a deep conviction that removing constitutional protection from pre-born children is a regressive step

The editorial also noted that the vote on same-sex marriage “fell in a liberal direction”, implying that a pro-life vote in a referendum would not be a liberal one. Yet the pro-life position is an inherently progressive one. We believe that the most vulnerable members of our society – pre-born children – should have their humanity and right to life recognised by law. What is more indicative of a caring society than seeking to protect those human beings that cannot fight for themselves? Mehdi Hasan, the pro-life former political editor of the left-leaning New Statesman, suggested that “abortion is one of those rare political issues on which left and right seem to have swapped ideologies: right-wingers talk of equality, human rights and ‘defending the innocent’, while left-wingers fetishise ‘choice’, selfishness and unbridled individualism”. We’d go so far as to suggest that being pro-life isn’t necessarily an issue that leans towards any particular political ideology. Among our members, we count supporters of practically every political party in Ireland, as well as those with no interest whatsoever in politics. What unites us is a deep conviction that removing constitutional protection from pre-born children is a regressive step.

The pro-life position, properly understood, is not based on bigotry or blind faith, but on scientific evidence and consistency. Some of us started out as pro-choice, but once we began to really study the issue, we realised that pro-life arguments are far more convincing and consistent within a worldview based on human rights and equality. These arguments resonate even stronger the more we learn about pre-natal development. Our “concerns” are not tangential scruples that can be legislated away. They are fundamental and go to the very nature of the deliberate ending of pre-born life.

A human life does not begin simply because someone, depending on their own personal or political beliefs, makes a decision that it has begun. The life of an individual human being begins at fertilisation, when spermatozoon combines with a secondary oocyte inside a uterine tube. To deny this is to deny science, and most pro-choicers are willing to accept this very basic fact. Pre-born children do not become more and more alive and more and more human as they develop. They are alive and human from the moment of fertilisation.

All one needs to do to have the right to life, for us, is to be a human being, and this earns us the label, as in the The University Times editorial, “extremist”

Setting aside pro-choice arguments like Judith Jarvis Thomson’s infamous violinist thought experiment that argues for the right to choose abortion even if it does destroy the life of a fully equal person, pro-choicers often suggest that while a human foetus may be alive and human biologically speaking, it still fails to count as a human being deserving of equal protection. For the pro-choice side, while we may all be human beings, that is not what grants us human rights. Whatever gives us rights is something that we, as born people, have and a pre-born child lacks. Given that for them, an alive, human, pre-born child is not a person, the pro-choice position involves claiming that not all living human beings are people.

There are a variety of ways of dehumanising pre-born children, but it’s usually done by adopting a gradualist position, with an embryo beginning as a non-person and becoming a person once some milestone is reached. They just can’t decide what that milestone is. Rationality? Cortical brain activity? Sentience? Brain birth? Consciousness? Pro-choice thinkers have individually argued in favour of all of these—there are flaws in each of these positions, but, restricted by word limit, we’ll just point out the inconsistency and vagueness of pro-choice justifications for denial of pre-born personhood. For us, the belief that life begins to matter at fertilisation is coherent, consistent, logical and decidedly more definite than any pro-choice argument.

Further, tying the value of a person’s life to their level of mental and emotional development and their ability to experience and express emotions and thoughts in a cognisable manner is dangerous insofar as it values the neurotypical above the neurodivergent. Arguing that developmental milestones bestow personhood lends support to an ableist agenda, masked by catchy slogans and shouts for “choice”. Criteria based on size, level of development, environment and dependency don’t really stand up to scrutiny either. Are smaller people really worth less than larger people? Should those with developmental delay, or who are incompletely developed, not have the right to live? Why should a temporary environment over which we have no control mean a death sentence? We are all dependent on others during at least some stages of our lives – early childhood, illness, old age. Does this mean that it’s acceptable to kill us during these periods? The consciousness criterion, arguably one of the more plausible pro-choice arguments, also fails: being temporarily non-conscious should not deprive a person of their rights (think of coma patients). So, again, for us it simply makes more logical, consistent sense to believe that personhood begins once a life begins at fertilisation.

All one needs to do to have the right to life, for us, is to be a human being, and this earns us the label, as in the The University Times editorial, “extremist”. Is it our preference for consistency over inconsistency that makes us “extreme”? Or our belief that human life deserves protection, regardless of whether it is perfect or privileged or planned?

How extreme is it to believe that in an unwanted pregnancy, it’s better to address the circumstances that make the pregnancy unwanted than to take a human life? Are we extremists to instead favour better childcare support, better support for children with life-limiting conditions and for their parents, measures that ensure workplaces and education systems do not make pregnancy a threat to learning or a career, to oppose the financial inequality that drives many to abort? Are we extremists because, without abortion, women are dying? Well, no. Ireland’s maternal mortality rate has been ranked joint 5th, 6th or 7th lowest in Europe and the world for the last three decades.

If what we have to say is so nonsensical, and you have the arguments to prove that your position is more logical, why be scared of what we have to say? Prove us wrong. Open yourselves to the possibility that you may, in fact, be the ones who are wrong

Arguing that the simple act of limiting choice is extremist doesn’t make much sense either. Limitation of “choice” where that choice will harm others is part of living in a society. We limit the choice, for example, of drinking 10 pints of lager and then driving home, because people may be injured or killed while exercising that choice. We limit the choice to express hateful views if they are capable of inciting violence against a vulnerable group. We have laws against the choice to murder because it takes lives. It is only in the abortion debate that a choice that harms human beings becomes a choice worth defending and celebrating.

Students for Life – Dublin is a group of Trinity students, but, as a single issue group, we can’t use the name “Trinity” or become an official society. However, we are active on social media, and next academic year we plan to hold events and discussion groups open to every Trinity student interested in the issue. We are also committed to making Trinity an easier place to be a student parent. If you really want to understand “our concerns” and where we’re coming from, talk to us. If you want us to listen to you, expect us to talk back. Challenge our views, and listen to us when we challenge yours. If what we have to say is so nonsensical, and you have the arguments to prove that your position is more logical, why be scared of what we have to say? Prove us wrong. Open yourselves to the possibility that you may, in fact, be the ones who are wrong. Social psychologist Jonathan Haidt, in The Righteous Mind: Why Good People Are Divided by Politics and Religion , says it best: “If you really want to change someone’s mind on a moral or political matter, you’ll need to see things from that person’s angle as well as your own. And if you do truly see the other person’s way—deeply and intuitively—you might even find your own mind opening in response.”

Listen to us. Talk to us. You might just find that you agree with us.

As a final note, although the term “unborn” is more widely used in this debate, we use “pre-born” throughout this article to describe the child in utero. “Pre-born” is a more accurate description of what the word “unborn” is supposed to mean: pre-birth.

Hazel Bergin, Ciara O’Rourke and Blánaid ní Bhraonáin are all members of Students for Life – Dublin.