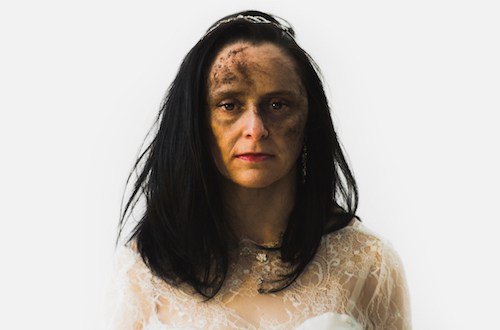 A collaboration between the multi-talented, award-winning writer Philip Doherty and one of Ireland’s most daring young theatre companies The Corps Ensemble, Close to the Sun, takes to the Smock Alley Theatre for the Dublin Fringe Festival. While at times the script lagged slightly, the production value, thanks to Hillary Dziminski, and quality of performance were superb.

The play stars the couple, Colin and Sophie, played by Jed and Mary Murray, as a besotted pair who are soon to be married. Their perfect “new world” that they have created together, accumulating in holy matrimony, is disrupted by the arrival of Colin’s estranged, alcoholic brother Rory, played by Neil Fleming. His presence seems to throw things off-kilter, causing an imbalance of nature itself. This has been predetermined by a chorus, who at the beginning of the play give us a foreboding warning of ill things to come. It is never clear whether or not characters can engage with this chorus. And towards the end of the production their prophecies turn to mockery.

Close to the Sun raises important questions addressing issues to do with emigration. Why do so many of us Irish feel the need to flee? What forces have expelled us from our native soil? What are the real repercussions if we someday return? Can we return? It attempts to give a voice to the “lost generation” of Irish emigrants. Throughout the play we hear intertwined mythological tales of both Irish and Australian origin, highlighting the connection between our two lands. Although driven by themes of tragedy and drama, the play progresses not without comedic relief. There is another more questionable scene of arousal mid-production, during Colin’s stag night, coming in the form of a very large inflatable penis. Although at times the story seems to waver in strength and credibility, the cast deliver a captivating performance. The fusion of music and movement, the energy and dynamism of the cast of seven make this play an engaging watch. It is the largest production The Corps Ensemble has tackled thus far. And they do so valiantly.

The stand-out performances come from Mary Murray, especially towards the play’s end, and Neil Fleming. Their characters are in mortal conflict with each other, one never making it off the stage. The play is full of the sense that there are strange, unpredictable forces at play outside of these people’s lives. The sense of the supernatural pervades from beginning to end. Strong direction from Stephen Darcy ensures fluid transitions of both stance and scene. Upon the fall of curtains it is evident that everybody – or almost everybody – has secret inner demons, yet it is uncertain whether we ever come to terms with these or not. When the characters finally rid themselves of secrecy, the weight that is lifted up off them does not seem to liberate the characters. In fact, there is an adverse affect, and their lives slowly slip out of their control. They drift higher and higher, precariously close to the sun.

An interesting production overall, it sheds light on neglected themes dealing with the meaning of home, love and family in the terms of an Irish emigrant. Perhaps not as wildly outrageous as The Corps’ previous show Made in China, Close to the Sun remains a play worth seeing during this year’s Fringe Festival. If not for dramatic quality, then for the beautiful lament that Fleming pipes out during the opening scene of the play.

Close to the Sun runs from the September 13th to 17th starting at 8.30pm in the main stage in Smock Alley Theatre for Dublin Fringe Festival.