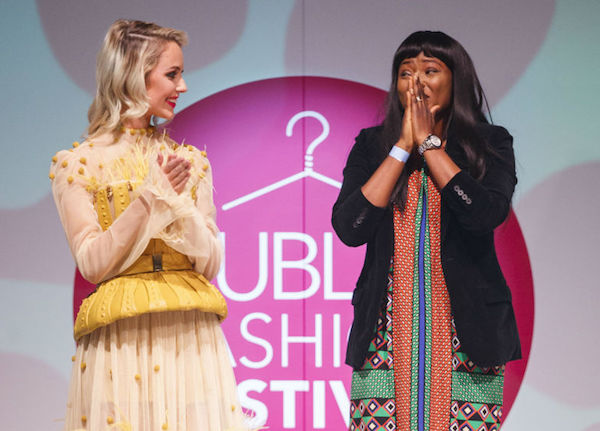 September is one of the most important months in the fashion industry. It is a time when magazine issues double in size and weight, and fashion capitals around the world host exclusive fashion shows for the upcoming Spring/Summer season. Despite an ever growing fashion scene, Dublin has yet to develop its own official fashion week. In an attempt to showcase Ireland’s top brands, Dublin Town hosted its eighth annual Dublin Fashion Festival (DFF) on Friday, September 22nd. Taking place at the impressive Round Room in the Mansion House and hosted by Xposé’s Glenda Gilson, the fashion show awarded the Young Irish Designer of the Year, as well as bringing a mix of high street and luxury fashion to the runway.

The evening kicked off with a drinks reception courtesy of Mór, a new brand of Irish gin, who created a unique cocktail menu just for the event. With 98fm’s Stephen Cooper as DJ, the Dublin Fashion Festival was set up to be a great night. Having also partnered with Dyson, Dublin Town were offering the covetable Dyson Supersonic hairdryer, among other items, as prizes for everything from “Best Tweet” to “Best Dressed”.

The first collection to make its way down the runway was that of JJ Donnelly, National College of Art and Design (NCAD) graduate and winner of the Young Designer of the Year Award in 2016. Inspired by hunting, her outstanding designs were displayed to a backing track of horse hooves, produced by DJ Cooper. With details of pleats and fur alongside a whip and horsebit, her designs could easily have been mistaken for those of a luxury fashion house.

Thanks to Donelly’s immense talent, this year’s 12 nominees for the title of Young Irish Designer had big boots to fill, but they took to the challenge with ease. Having graduated from Dublin’s Griffith College, the Roman Academia Costume e Moda and more acclaimed institutions, each designer showcased a unique creation that reflected their differing backgrounds and inspirations. It is unfortunate that by displaying only one outfit per finalist, rather than their entire collection, the impact of each designer was difficult to experience in full effect. However, the winner of the prestigious title, Naomi Ajetunmobi, will be given the opportunity to shoot her entire collection with Barry McCall, one of Ireland’s leading fashion photographers.

With what was, to me, the best part of the night over, the rest of the evening slowly began to lose my interest. The remaining fashion that made its way across the stage was in no way impressive, especially when compared to the amazing talent of the young designers. Models wearing outfits ranging from Penney’s to Brown Thomas strutted across the catwalk but the styling was frankly not inspired. Chuck Bass would have been appalled to see an outfit of runners, jeans and a hoodie sported as new and “on trend”. Call me crazy, but if I am surrounded by such outfits walking down Grafton Street, I certainly don’t need to see it on the runway.

The Dublin Fashion Festival missed out on an opportunity to showcase the true talent boasted by Irish designers by choosing instead to showcase fast-fashion brands. International high street stores were promoted in place of the numerous independent boutiques and designers that make up the Irish fashion industry. The talent of the young Irish designers was considerably more impressive than any international high street brand which was, rather poorly, styled for the show.

Should the Dublin Fashion Festival choose, in the future, to dedicate itself to such boutiques and designers, it will give a more true representation of the unique and diverse talent that the Irish fashion industry has to offer.