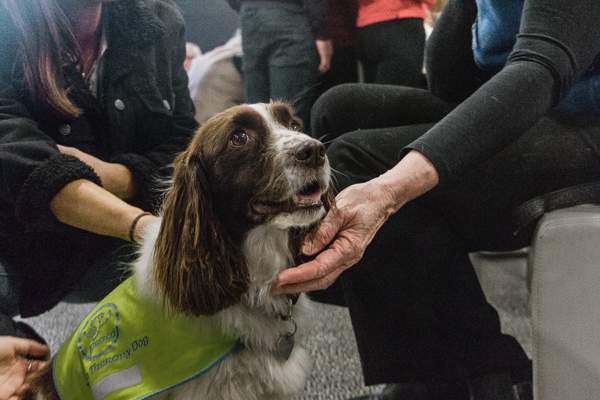 Everyone loves dogs. More than ever with online crazes from WeRateDogs™ to Doge, dogs have become one of the most universally wholesome and inoffensive hobbies to have.

And who wouldn’t love them? They’re fluffy bundles of unadulterated joy, or at least so it seems. In general, we tend to overlook some of the less convenient facts about man’s best friend. Like the fact that they’ve become so dependent on us that up to 85 per cent of them suffer from some degree of separation anxiety every single time we leave them alone. Or that actually, it isn’t always easy to tell what they’re thinking and what makes them tick (what looks like a smile to us doesn’t always indicate happiness).

We’ll unthinkingly declare our love of dogs to the world by wearing “Pugs Not Drugs” t-shirts, even though if you’ve ever been within a few metres of a pug, you’ll likely have been traumatised by the sound of them literally struggling to breathe, a by-product of their selective breeding.

Dogs are wonderful animals – possibly man’s best invention as well as friend. They can be trained to accomplish unbelievable feats as guide dogs, herders, or K9s. They, like rabbits and horses, also serve as therapy animals. The effectiveness of animal-assisted therapy is actually still disputed by many researchers, but this is the rationale that is behind the “puppy room” which, once again, has been organised by Trinity College Dublin Students’ Union (TCDSU) as part of Mental Health Week.

The reality of the puppy room doesn’t seem so calming when it involves spiralling queues down the corridors to spend five minutes petting and holding a small group of bemused, if not slightly overwhelmed, dogs. The organisations who volunteer their dogs – in this case Peata – no doubt prioritise above all the interests of their animals, and exposure and donations for their charity is an undeniably worthy cause. There is no mistreatment here.

But hoards of people waiting in line and grappling to touch and take photos with dogs who don’t know or trust them leaves a bad taste in mouth, and very much straddles the line of respectful boundaries with animals. Just because a dog is wagging its tail doesn’t mean it’s happy (it could just as easily be irritated, stressed or angry), and just because it’s not under extreme duress doesn’t mean it’s benefiting. We aren’t saying that this is the same for all establishments that specialises in puppy care and interactions. Some establishments put the needs of their dogs first, giving them space to breathe and lead a happy life, with food, treats, and a calming bed for dogs to sleep in. It is a stark contrast to other venues. This kind of fleeting interaction between student and dog is hardly an effective form of therapy for either party.

It’s probably not the objective of the puppy room to actually provide serious stress relief, but it does put a smile on faces and gives people ideas for managing their own mental health through animal company outside puppy room-hours. It’s a huge crowd pleaser, evidenced by the trend’s take-off in the last five years, with the puppy room phenomenon recurring again and again in colleges around the world. But dogs, like all other animals, don’t exist for our entertainment, something we’re prone to forgetting in this internet age of hilarious ice-cream-munching dog videos.

But dogs, like all other animals, don’t exist for our entertainment

Dogs have their own complex psychological needs, which need to be given priority over being a novelty social media opportunity for students. And it is, in particular, our responsibility as students to think critically about our treatment of all animals, and that involves thinking beyond dogs as our very own cute play things.

We long ago acknowledged that using elephants and lions in circuses was not a compassionate way of treating animals, and revelations of the mishandling of animal stars in cinema led to tighter legal protections during the 20th century, as well as the omnipresent disclaimer “no animals were harmed”. But it’s not just the outright abuses or overworking of these creatures that was the problem, it’s the idea of animals as spectacles, where consideration for their welfare was overlooked for the sake of their entertainment value.

Puppy rooms are far from the worst thing we subject animals to, even within the confines of Trinity’s gates. It’s our attitude towards this supposedly most innocent of phenomena that’s a problem. The reality of puppy rooms is that it plays into our tendency to fetishise animals who, with no voice to speak up, have their needs relegated to the bottom of the pile. Once again, we overlook the first and foremost fact that dogs are living things with their wants and needs, not objects for our personal amusement – or in this case, our Instagram photos.