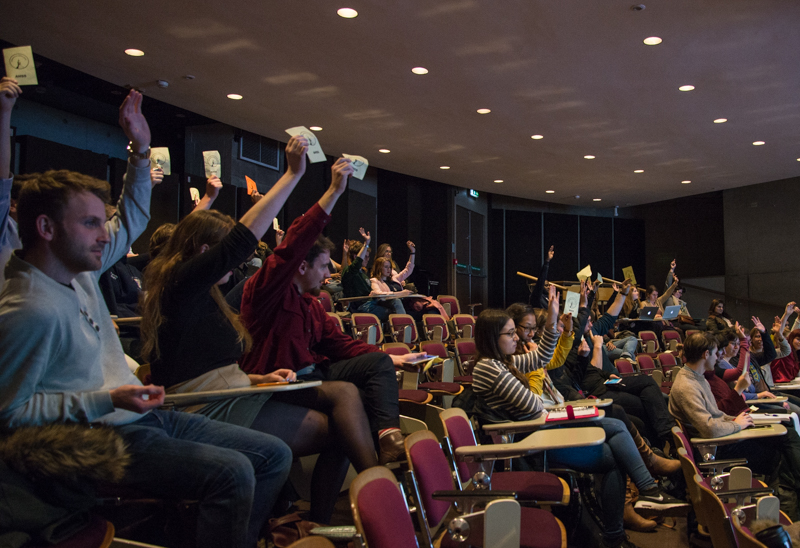 It is one of the great truisms of the modern academic world that neoliberalism, that creeping, ubiquitous ideology-that-is-non-ideological, has transformed higher education into a business and students into its customers. In the case of Trinity’s postgraduate community, this is no longer true. As one of the attendees at Wednesday evening’s Graduate Students’ Union (GSU) council put it, businesses make their customers’ satisfaction a priority, but Trinity has neglected ours completely. Far more apt for our situation was the term used by the President of the GSU, Shane Collins: “cash-cows”.

Trinity’s Finance Committee has decided, for the fourth time in as many years, to raise postgraduate tuition fees across the board for the following academic year, this time by 5 per cent. Not merely for new entrants, but for everyone. Students in the middle of their degrees are seeing their bills increase from year to year. It is one thing, in the face of academic burnout, to wonder “Am I going to pass the review process for this year?” or “Can I actually complete this thesis?”, and consider the dreaded prospect of dropping out. It is quite another to lie awake at night wondering “Am I going to be able to afford to finish this degree?” and watch years of painstaking labour, not to mention several thousand euro of already sunk costs, go up in smoke thanks to circumstances beyond your control.

The prevailing mood of the postgraduate community is not one of easily riled, tub-thumping students, eager for the next protest. Instead, the sincere and business-like question on many lips is “Where is our money going?”. One might assume that, had the Finance Committee come to us cap-in-hand, making the case for the necessity of the increased payments and willing to compromise, or at least be receptive to our concerns, all would be well. Instead, when these decisions have come from on high, with little to no warning, and from a body not even the College Board can overrule, it is hard to avoid the impression that we are being milked.

As a first-year PhD student, I am not in the best position to measure any impact these fee changes might have had on the services rendered to postgraduates since the beginning of the fee increases. Yet I am reliably informed by those in the years ahead of me that, over the years, there has been no visible return for the rising costs.

What I can talk about from personal experience, especially as an international student, is the abysmal state of Trinity’s accommodation provision. With the institution unable to provide a place for more than a fraction of its students, and average rents across the city sky-high, one might expect some kind of emergency response. The closest we have received is an advertisement for an outsourced housing solution at the going market rate, released not before but only after the start of the postgraduate academic term. And, of course, the fine apartments of Kavanagh Court are not available to those who, like many in their mid-to-late twenties, wish to share their living quarters with a partner or spouse. It’s back to the drawing board of how to avert homelessness before our couch-surfing prospects run out for a lot of us from overseas.

When you’re often paying over €800 per month (€9,600 a year) simply to ensure that you have a bed to return to every night, never mind keeping yourself fed, a demand to fork over more and more to continue your studies gives the impression that Trinity occupies less the role of research institution dedicated to guiding you on the path to success and more that of the landlord keen to squeeze you for every last penny.

In the past, Trinity was a place of refuge and a place of hope. I came here, along with a number of my peers from the UK, in the wake of the British government’s substantial tuition fees hike back at the beginning of this decade. Not only was Trinity offering a degree for far less than one would cost me in my own country, but it was also a place of genuine, historic prestige and research excellence willing to take on a student with two As and a B at A-level and let them develop their academic skills to the full. Trinity became my home, the institution I missed and longed to return to many times during my year away as a master’s student, and the place I couldn’t wait to return to on receipt of my offer for a PhD place.

The feeling now, upon being greeted with the chronic financial abuse of students, is something akin to betrayal.