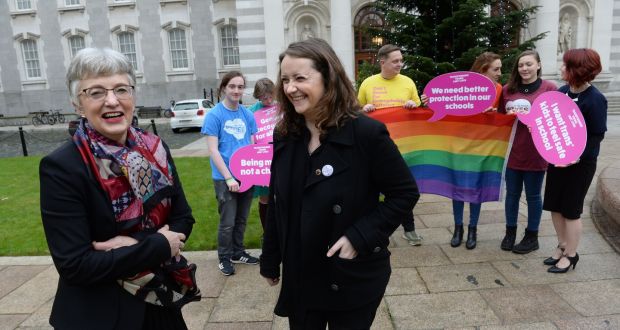 The overwhelming yes vote in Australia for marriage equality is a bright beacon of hope in a world where equality, fairness and justice often seem to be under constant attack.

The near 80 per cent turnout and overwhelming support outstripped, at least in figures, the Brexit vote, the election of Donald Trump and the rise of the far right in Europe. It shows that when awareness is raised and when given the opportunity, people will generally support love.

In May 2015, it was Ireland’s moment. Now, it is the turn of Australia, as it moves from celebration to legislation in the coming weeks. The Irish vote was mentioned many times as an example for our cousins down under to follow. It is not surprising that many at the forefront of the campaign had Irish accents and had learned from the experience of the Irish referendum.

There seemed to be a view that all is well here and equality has been secured. However, in terms of marriage, we don’t have to look too far to see that the fight is far from over. As the result came in, my thoughts were also with our proud, brave and resilient brothers and sisters denied their rights in Northern Ireland. We must continue to stand in solidarity with them.

Here in the South though, there is also unfinished business. Recent figures which have come across my desk are stark and a wake-up call.

As part of preparations for the world’s first LGBTI+ Youth Strategy, we have been listening to thousands of young voices across the country. It is disappointing to report that one in five are experiencing bullying, harassment or discrimination in the classroom, schoolyard or the community. As I travel the country, I hear from members of our community frightened to be photographed, to be mentioned on social media or to be outed – for fear of some sort of reprisal.

It is true that our third-level campuses have always been drivers of change.  From our lecture theatres, the outlook and environment can often be more liberal. But we cannot be complacent. Equality, as we all know, is hard fought, precious and fragile.

In our schools, I am supporting the BelongTo #StandUp17 campaign. Every school is being asked to literally stand up to bullying by increasing awareness, educating students and including anti-homophobic and anti-transphobic provisions in anti-bullying charters.

From our lecture theatres, the outlook and environment can often be more liberal. But we cannot be complacent. Equality, as we all know, is hard fought, precious and fragile.

On campus too, students, staff and management must look at attitudes, policies and approaches. Are members of the LGBTI+ community made feel comfortable, safe and welcome? Is there a zero-tolerance approach to bullying? Do fellow students and staff feel empowered enough to confront homophobia when they witness it? Is life on campus fair and just for all?

These are questions every one of our colleges and universities should be asking at every level.

As the tweets of Trump, the jackboot of Putin and the rise of the far right threaten equality, it may well fall on academics to once again speak out for what is right and just. Such challenges will only carry currency if they come from campuses where everyone is respected.

Next month, as Minister, I will give an important update on the development of the LGBTI+ Youth Strategy. As a campaigner, a driver of social justice and an independent political voice, I will also be travelling to Belfast. There, I will be standing shoulder to shoulder with those denied the right to marry the person they love.

I have no doubt that a lot of the voices I will hear will come from student unions, college academics and others from campus. My advice will be drawn from our own long road to marriage equality. Do not be put off by the setbacks. Keep your eye on the final goal. Know that right and indeed the international movement is on your side and be resilient.

Australia, the LGBTI+ Youth Strategy and the determination of our fellow campaigners in Northern Ireland are beacons in a fight, which on campus, at home and internationally is far from over.

We must never tire of telling the Irish experience and the story of our own continuing journey. We owe it to those denied their rights and those who live in fear of prosecution, imprisonment or even death because of love. The retelling of our experiences, our constant striving for total equality and our successes offer them hope.

Australia, the LGBTI+ Youth Strategy and the determination of our fellow campaigners in Northern Ireland are beacons in a fight, which on campus, at home and internationally is far from over. For all who believe in love, fairness and justice, the fight for equality goes on.

Katherine Zappone is the Minister for Children and Youth Affairs.