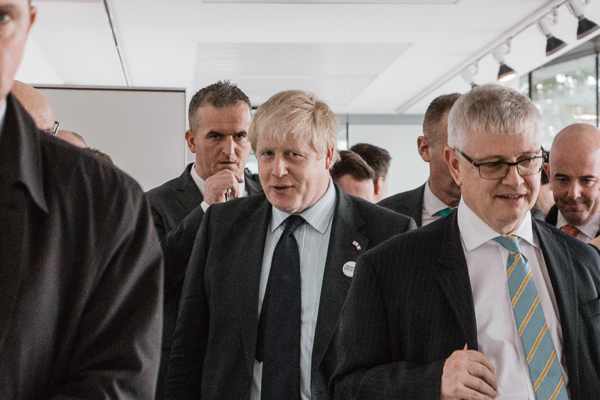 Johnson in the Science Gallery this afternoon.
Guy Boggan for The University Times

Boris Johnson visited one of Trinity’s science research centres today, as part of his visit to Dublin to discuss Brexit and the impact it will have on Ireland.

Boris Johnson – who became a prominent figurehead in the Leave campaign in the Brexit referendum – visited Trinity today, meeting with researchers and staff. Unlike the visit of former US Vice-President Joe Biden in September, there was no casual stroll around Trinity’s campus.

Instead, there was a heavy Gardaí and security presence outside the Science Gallery, as Johnson visited the Centre for Research on Adaptive Nanostructures and Nanodevices (CRANN) and Advanced Materials and Bioengineering Research Centre (AMBER), two of Ireland’s top research centres.

He was accompanied by the College Bursar, Prof Veronica Campbell, and the Director of Science Foundation Ireland (SFI), Prof Mark Ferguson.

A large student presence was there to greet Johnson as he left the Science Gallery just after 2pm. One student heckled Johnson, but most seemed more curious about the presence of Gardaí on campus. Another student took a selfie. 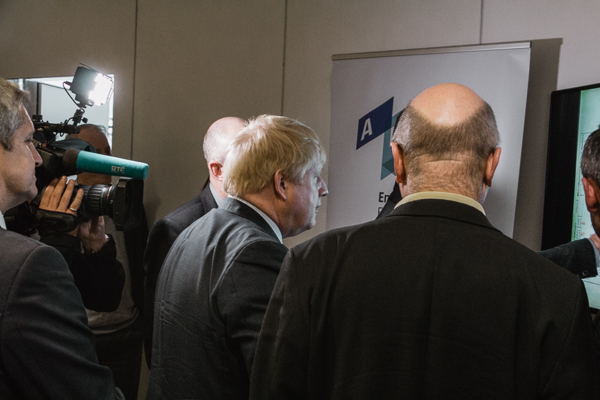 Johnson met with some of Trinity’s leading researchers during his trip to the college.
Guy Boggan for The University Times

Johnson appeared earlier today with the Minister for Foreign Affairs, Simon Coveney, in a somewhat awkward press conference this morning, where he discussed the contentious issue of Ireland’s border with Northern Ireland.

Johnson has faced criticism in the UK in recent weeks for his behaviour as foreign secretary. He has faced calls for his resignation, amid a row over comments he made about a British legal aid worker currently in jail in Iran.

Trinity has established a Brexit taskforce to ensure that the College is prepared for the possible challenges and opportunities presented by the UK leaving the EU.