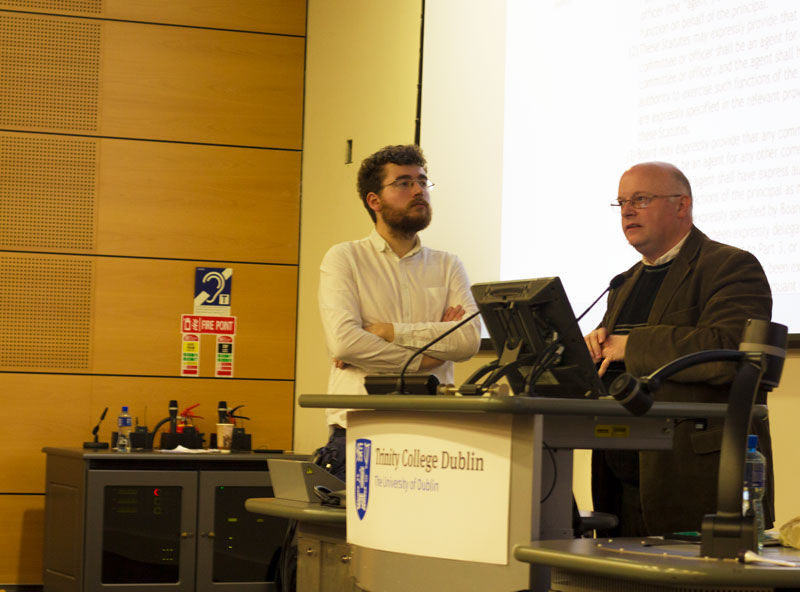 Staff and students united this evening to question and condemn Trinity’s decision to increase postgraduate fees by five per cent.

Tonight’s town hall meeting, organised by the Graduate Students’ Union (GSU), comes after the union agreed to explore strike action in response to the much-criticised decision by Finance Committee to increase fees.

Such town hall meetings are relatively rare. Students from across various faculties and research areas attended this evening, with many sharing their discomfort and shock at the level of fees in Trinity compared to other universities.

As the night continued, students raised again the threat of strike action. Other students in the audience asked for political support on the issue, while some called on emails and letters to be sent to Trinity’s senior staff.

Speaking at the meeting this evening, Dr John Walsh, Chair of the Trinity Branch of Irish Federation of University Teachers (IFUT) and from the School of Education, said that “it might be helpful if members of the university realised they were in a crisis”.

The higher education sector is facing a “profound crisis in terms of sustainability”, he said, but “the response of colleges and universities in this country has been a combination of comedy and farce”.

Walsh said that researchers in the sector are “among the most precarious”.

“In most other sections of the country, the treatment of researchers would simply not be tolerated”, he said.

Speaking this evening, Danielle O’Sullivan, a postgraduate student from the the School of Social Care and Social Policy, described her fear that if Trinity continues to increase postgraduate fees “I won’t finish my PhD”.

“I implore the university to take into consideration that our reason for coming here is that Trinity is the best”, O’Sullivan continued. “Education is becoming something again for the elite”, she said.

The second student on the panel, Natalie Glynn, suggested that College is not spending the money it already has wisely. Though she is externally funded, she said that this funding does not cover all of it and that a lot of students are working to pay the fees: “They are hurting all of the research.”

Trinity has defended the decision. In an email to The University Times last month, Trinity’s Chief Financial Officer Ian Mathews said the €2.5 million income generated from the increase by saying the fees would go towards “improvements in student services and the student experience overall”, and promised a “detailed plan in this regard”.

The decision received backlash from several College Board members, who spoke out strongly against Finance Committee’s decision. Speaking to The University Times, Sarah Alyn-Stacey, a Fellow and a member of the College Board, said that the “people affected by the increase in fees are the next generation of scholars” and that the cost of “€2.5 million is a small price to pay for the next generation of scholars”.

Speaking at the meeting this evening, Alyn-Stacey said that she was “appalled” and “disappointed” by the decision to increase fees, asking how College Board could “take back control”. “Please don’t think that all members of board are complicit”, she said.

Although Board is the final decision-making body in the College, the decision taken at Finance Committee was final and was only brought to College Board to be noted. Under the College statutes, the Board can grant agency powers to other bodies in high-level decisions.

At the meeting this evening, University of Dublin Senator David Norris told the crowd that you “you don’t let the bean counters run the show”.

Speaking about these rules entrenched in the College Statutes, Prof Eoin O’Dell, former Chair of the Fellows and lecturer in Trinity’s School of Law, informed the crowd that though Finance Committee have the power to make a decision on postgraduate fees, College Board can, if it chooses, remove that power. “Board can do anything”, he said.

However, O’Dell warned that Board might not choose to make the “nuclear decision”. But “minds can be changed”, he said.

Speaking to The University Times last month, President of the GSU, Shane Collins said that the GSU has pushed for voting rights on Finance Committee: “It has been raised for the best part of the last three years.”

Collins expressed this as a point concern, considering it is “the biggest issue that comes up” on Finance Committee “year on year for postgraduates” and they “theoretically don’t have a vote on the matter”.

Correction: November 14th, 2017
Due to an editing error a previous version of this piece said that College Board approved the Finance Committee’s decision to increase the fees, when in fact they could only note the increase.