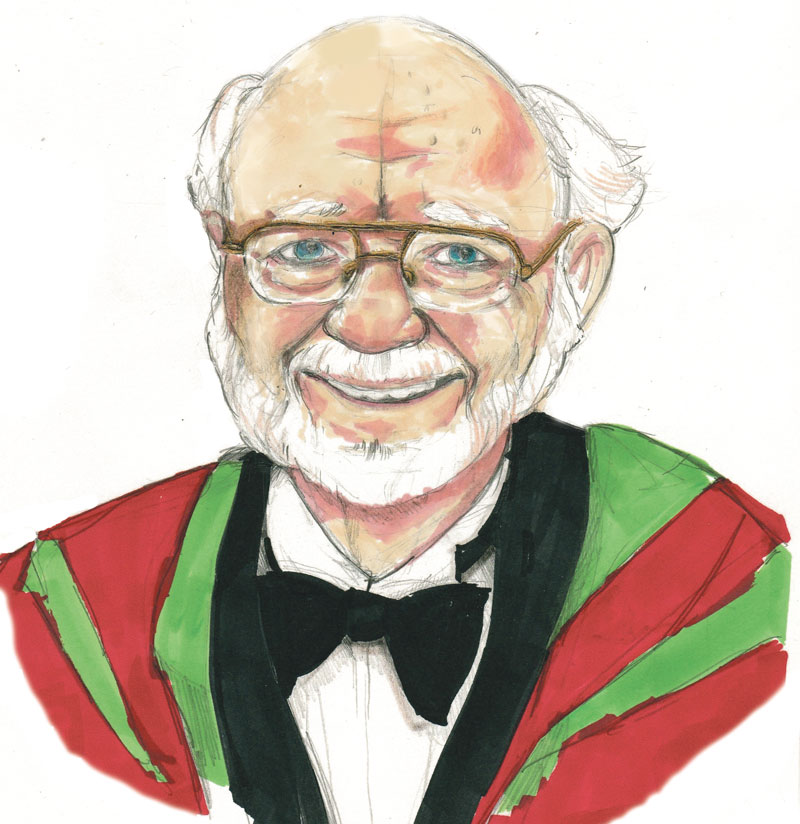 Illustration by Stephen Paul Paclibar for The University Times

Just over two weeks ago, a group of secondary school students (plus two members of my lab who I had coerced into coming with me) filled Tercentenary Hall in the Trinity Biomedical Sciences Institute to launch the new undergraduate science programme. While the school students were no doubt there to hear about what would be in store for them at Trinity, I was there solely for the keynote speech, to be given by Prof William C Campbell, a Trinity alumnus and winner of the 2015 Nobel Prize in Physiology or Medicine (in order of importance). Neither I, nor anyone else there I imagine, would ever have dreamed of being in the presence of someone with such passion for research into worms. Nor would I ever have thought that I myself would come away from a talk feeling a strong desire to go and paint my own version of a stained glass window ingrained with swirling parasitic worms.

Talks such as the one given at the launch are now the norm for the Donegal native. He is keen to impart some small piece of his vast knowledge and experience on the world, particularly to young students. Most often, as he did on this occasion, he will begin his talk with a picture of his home town, Ramelton, Co Donegal, in which his father’s cows are at the fore. This serves two purposes, one is to show his perpetual love for the place he grew up in, and the other is to illustrate the origin of his interest in parasitic worms.

His love of teaching and encouraging interest in science in young people is evidenced by his schedule while in Ireland. He spoke at a primary school in Trim about his work, and fought off questions about “how much money he had won” from persistent little girls, with the utmost dignity. He also donated some money to sponsor three prizes in the Department of Zoology at Trinity for the best undergraduate research project, the best undergraduate student and the best postgraduate teacher.

I love worms, but I have spent most of my life trying to kill them

While at the prize-giving ceremony, he met with Celia Holland, a professor of Parasitology in Trinity. I spoke with Holland about Campbell and his work. Their paths had crossed on occasion given their work in the same field, but the strongest connection they share is Trinity. Holland was instrumental in inviting Campbell to receive his honorary degree from Trinity in 2016, and has met him on a couple of occasions since then. She describes him as possessing a “great Donegal humour” and points to his frequently used quote: “[I] love worms, but I have spent most of my life trying to kill them.”

In honor of Campbell’s work, Trinity launched a new lectureship in his name. His link to zoology at Trinity is one he cherishes, and one which the university is fortunate to have. He often speaks of his close relationship with his mentor from his time at Trinity, Desmond Smyth, a famous parasitologist, and credits him with being instrumental in developing his interest in parasitic worms. The establishment of this lectureship and prizes for undergraduate and postgraduate students mean that Campbell’s link to Trinity will continue in perpetuity in a very tangible way.

Of note about Campbell is his willingness to credit others for the successes in his life. This humbleness is obvious to anyone attempting to write about him, for he often shoves the spotlight onto someone else, making it necessary to speak to others about him. I spoke to a former doctoral student of his, Dr Sherrilyn Sethi, of the University of Massachusetts Medical School. Sethi completed her doctoral work under the supervision of Campbell while at Drew University in New Jersey, where Campbell settled in the 1990s after leaving Merck and Co, having carried out the work that would later win him his Nobel Prize. What’s interesting here is that I would have known Campbell as a hardcore research scientist in the area of parasitology, yet Sethi completed her work under him in the area of medical humanities.

Sethi’s original plan was to pursue a doctorate in medical ethics, but realised early on that medical ethics actually fell under the bigger umbrella of medical humanities, in which Drew University had a great programme. So to Drew she went, still with the intention of pursuing medical ethics, but as she sat in a class being given by Campbell, the axis of her entire world shifted. All it took was one class in which Campbell outlined how the entire pedagogy of anatomy had changed because of one anatomist named Andreas Vesalius for Sethi to be hooked. Campbell was so magnetic, enthusiastic and charismatic that this one class changed Sethi’s entire focus – he literally changed her life. We joked about how cliché that was, but it was the wonderful reality. 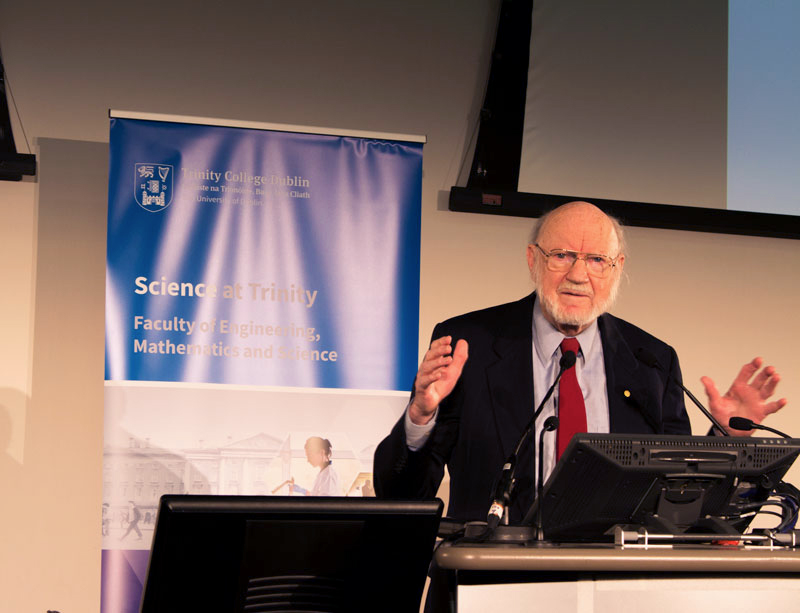 Campbell speaking in Trinity last month at the launch of the new science degree programme.
Dominic McGrath for The University Times

As a doctoral supervisor, Campbell was tough, inspiring, trusting and compassionate. His interest in the area of medical humanities was purely hobbyist, yet he has an unmatched knowledge of the area, never relying on notes for classes and reciting names and dates of 500 years of medical history from the top of his head. Lectures given by Campbell at his time in Drew were less like a lecture and more like story time. He would weave this amazing tapestry of history, which Sethi jokes about as being wonderful in one sense, but awful in that you became so enthralled in the story that you would forget to take notes. Although he no longer lectures in the formal sense, he is an internal teacher and still imparts his knowledge on the world through the talks he gives at launches. You will never come away from an interaction with him not having learned something new about the world or yourself.

His supervising style was to guide and trust and believe that you knew best. He made you think independently. Sethi says that “he was not about spoon feeding or coddling”, he wanted you to stand on your own two feet.

I know what you are doing. Don’t question yourself. I have full faith in you

In the same way he advocated for the drug he and his team developed at Merck to be made accessible to people in developing countries, he was an advocate for every one of his students. Doctoral students are always questioning their path, their approach, their originality. If he saw that you were fighting yourself, when you were no longer your own advocate, he would say, “I know what you are doing. Don’t question yourself. I have full faith in you. You will find your way through this. Think about it some more. Let it marinade”. He would encourage you to step back and ruminate on the issue, but not to make a decision without letting it settle. His deep understanding of the inner turmoil felt by frantic students is a testament to his own intelligence and compassion.

Sethi compares Campbell to some of the greatest minds from history. He is this “true Renaissance man” in that his interests in the world are so far reaching – he is a painter, a poet, a kayaker, a researcher and a historian. He does so many things so well that one has to question whether he has found a way to extend a day beyond the usual 24 hours.

Despite all of his successes, he is still a very humble man. This was wholly apparent in his talk, when he spoke of going to Sweden to collect “the thing”, or in other words, the Nobel Prize. Sethi says his humbleness was unexpected, and that this trickles down into the way that he lives. When she thinks of an academic, she conjures an image of an individual, extremely singular in their approach, very disciplined and methodical, without time for chit chat, eternally buried in old dusty books. The reality with Campbell is that he is a “jolly fellow that is laughing and joking.” His home is bright and warm and beautiful, for which she credits his wife, Mary.

His comfortable and friendly home is reflective of his personality, which is also reflected in his paintings. He paints the most wonderful images of brightly coloured worms in bouquets of flowers or embedded in stained glass windows. His paintings also reflect his eternally positive outlook on life. Sethi is still amazed at how he can see such colour in one of the ugliest creatures on this planet. She says that he is “a true optimist in the sense that even in the most horrifying creatures we have on this earth he found beauty in that, and I think that says a lot about him”.