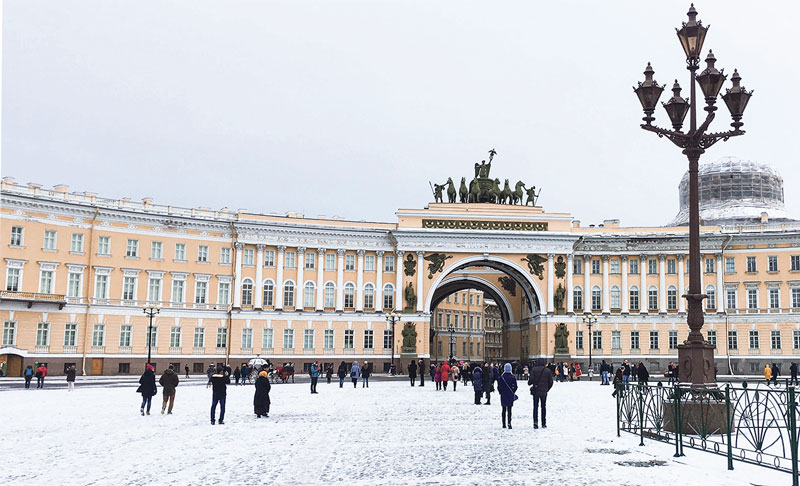 Like many Russian novels, our journey begins in a train station. We board our stuffy, packed sleeper train from Moscow in the middle of the night, pushing past the feet of locals sticking out from the short and narrow beds lining the cabin, our whispered English conversations drawing attention and disrupting the slumbering travellers. Clambering ungracefully onto our third-class top bunks, we spent the sleepless 13-hour overnight journey unable to twist or turn.

We had come to Russia’s second – but arguably most beloved – city for a break from our fast-paced life in Moscow. Disembarking, sleepless but eager to get moving, we push through crowds of brash taxi drivers onto the streets of St Petersburg to reach our hostel.

St Petersburg’s centre is very compact. Modeled after European cities like Amsterdam, Oxford and Vienna – which Peter the Great visited on his incognito tour of Europe in 1697 – there are several canal rings radiating from the centre. Using the first canal, the Moyka, as our base, almost everything we wanted to see was in walking distance.

Wrapping up for the -15 degrees Celsius temperatures, we were ready to take in this iconic city that we had heard so much about. We meander along the canals and stroll on snow-topped pathways down narrow backstreets almost alone on a quiet Sunday afternoon. As we gravitate towards the centre, we find ourselves heading for the Hermitage, also known as the Winter Palace – the biggest reminder of the achievements of the Russian Empire.

Traces of Soviet Leningrad can still be found scattered around the city, hiding behind the elegant facades of buildings

This ostentatious, turquoise palace – the main part of it built by one of the most formidable early female leaders in the world, Catherine the Great – has seen extravagant royal balls, devastating fires, revolutions, palace coups and massacres. The famous 1917 storming of the palace is immortalised in famous films like Sergei Eisenstein’s October and many iconic paintings.

Today, the palace is one of the most famous museums in the world and hosts thousands of visitors each year. We brave the queue in sub-zero temperatures, testing our limits until one hour later we finally made it inside. The collection itself is impressive, with highlights including a fully functional golden peacock clock, an unrivalled Russian portrait collection and Michelangelo’s crouching boy statue. But what truly sets the Hermitage apart is that the building itself is a work of art, with every hall, ceiling, staircase and door gilded with beautiful gold detailing or plaster ornamentation.

On exiting through Palace Square, we approached the bank of the River Neva and are hit with a blast of freezing air. Crossing the bridge over the River Neva, we are offered a breathtaking vantage point from which to behold the long stretch of palace and other landmark imperial buildings facing onto the frozen white river.

Another 15-minute walk brings us to where it all began: the Peter and Paul Fortress. There, Peter had set out his plans for a new utopian, European-looking city. The citadel boasts a jarring mix of buildings, with prison cells, engineer workshops, a kitsch museum documenting Peter’s great project and how he achieved it. The citadel also plays host to a cathedral with a towering golden spire housing the remains of each tsar since Tsar Peter, including the recently re-interred remains of the last tsar, Nicholas II, and his family.

The city of St Petersburg is undoubtedly an impressive achievement of imperial Russia, but the city’s metro – the second deepest in the world – is a prime example of a Soviet-era project and is every bit as impressive. Purchasing our metro coin tokens for a mere 70c, we descend the never-ending escalators to enter the Soviet-style palatial metro stations with marble mosaics depicting nautical scenes and hail the city’s famous founder: Tsar Peter the Great.

Traces of Soviet Leningrad can still be found scattered around the city, hiding behind the elegant facades of buildings. Despite 70 long years under the reign of the Soviet Union, the ornate historic centre remained almost entirely intact. During our visit we journey to an old-fashioned Soviet donut shop, Pyshechnaya, which has been running since 1958 to treat ourselves to some pyshki. Priced at a meager 20c, little donuts sprinkled with powdered sugar were served hot out of the fryer and are cheerily munched on in the freezing January temperatures, as we venture down the legendary main avenue, Nevsky Prospekt.

St Petersburg is a city bleeding with history. Turning off Nevsky Prospekt, we are greeted with an image that graces the covers of all St Petersburg travel guides: the beautifully menacing Church of the Savior on Blood. Built on the site of the murder of Tsar Alexander II, it was here that the first terrorist attack the world had ever seen took place.

Behind the ornate imperial facades of buildings lining the Petersburg streets, lie mazes of grey blocks where the grungier, creative young people congregate to well-hidden bars and clubs, with street art. Close to the cathedral, we spend our evening in the Soviet Arcade Games museum, transporting us to the past with vintage arcade games that involved helping our grandmother heave a heavy turnip out of the ground and maneuvering an ice-hockey version of foosball.

Our trip finishes off with a visit to the Mariinsky theatre – which hosts the ballet company commonly recognised as the best ballet in the world – to enjoy a rendition of Swan Lake. Offering a sublime performance in three acts, we enjoy a stunning view of both the opulent theatre, decorated with gold and teal, and the graceful ballerinas flitting across the stage. We knew we made the right choice to include a visit to the ballet during our trip.

As the crowds flood out of the theatre onto roads freshly coated with snow, we begin a night of wandering through the deserted narrow streets. Following in the steps of former residents Dostoevsky, Lenin, Gogol and the Tsars, we trace a journey they would have taken along the Griboyedov embankment. Like they might once have done, we watch some young boys sliding recklessly up and down the frozen canal.

If a thousand Russian novels begin in train stations, then many more stories find their conclusion in the winter playground of St Petersburg, among reckless youths and centuries of Russian history.