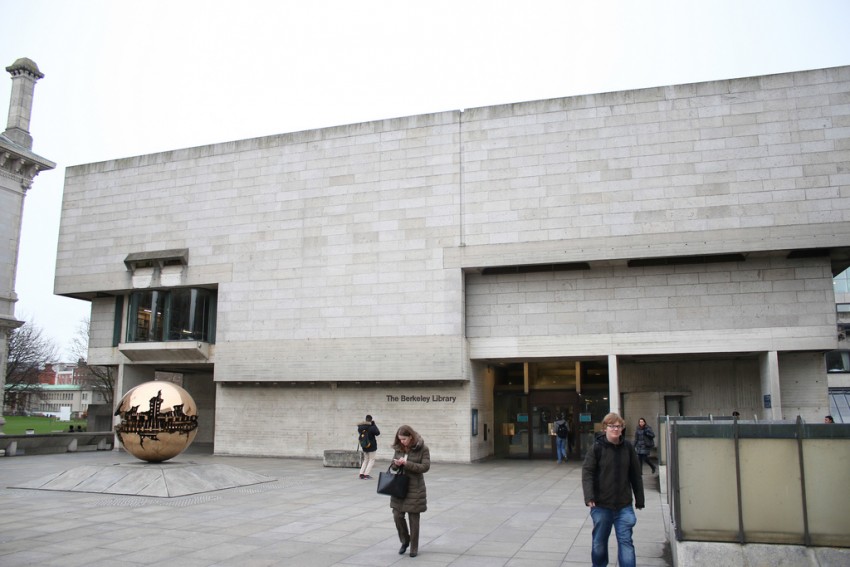 Celebrating its 50th anniversary this year, the Berkeley Library, “beloved of architects”, still holds a special place in the hearts of many students and staff at Trinity. Named after the great Irish philosopher George Berkeley, The Berkeley Library remains a place of solace to the deep thinkers on campus.

Austrian-born British Architect, Paul Koralek submitted the award-winning design in 1961. Contrary to the older architectural style that Trinity was by that stage famous for, Koralek’s designs displayed a modern, brutalist feel. Trinity were looking for a building that “spoke to the twentieth century, not just a neo-Georgian, pseudo-pastiche”, they wanted “an archetype of the twentieth century”. The funding for The New Library (as it was called back then) was received after producing a short twenty-minute film entitled, “Building for Books” and screening it in cinemas across Ireland. Various college alumni such as the Guinness family and Samuel Beckett to name but a few made contributions towards the cause.

The original design was quite different from the end product. Koralek revised his plans after having won the competition at the mere age of twenty-eight (the youngest competitor amidst the 218 entrants) he visited Trinity for the first time. He wanted to have a building that shared a subtler connection with the existing buildings on campus. The technology to make precast concrete (as per the original plan) was not available in Ireland at that time, instead the concrete was mixed by G&T Crampton (the assigned construction company) on site and poured into wooden moulds, making the Berkeley Library a “petrified forest” of sorts. If you look closely, the marks of the wood used to mould the concrete can still be seen on the walls of the library to this day. This technique was employed by the Swiss-French architect and designer, Le Corbusier. A model of the new library, curated by Donal Hickey, is currently exhibited in the Architecture Gallery of the Irish Architectural Archive until Friday 5th January 2018. The exhibition portrays the transition from Koralek’s competition-winning entry to the as-built structure.

Walking around the Berkeley Library with assistant librarian, Greg Sheaf, it is hard not to be struck by the uniqueness of the building. The love that he felt for the library, having worked there for the past 12 years, was infectious and as he analysed the various nooks and crannies and basked in the natural light that beamed in through the skylight windows, one couldn’t help but find a new appreciation for this building that is so often scoffed at by students as being old, drab and dreary when compared to the more modern and sterile Ussher and Lecky Libraries. In the words of Sheaf himself, “while the Ussher is a perfectly well designed, modern library, it doesn’t have a soul to it, the Berkeley has a soul”. The asymmetrical shape with both individualised and group reading areas enables users to find a space unique to their own needs. The bookshelves and counter on the first floor are solidly planted to the ground with cement, giving a sense of permanence and stability. The Berkeley Library was made to last, and while the introduction of the modern era with new LED lighting and cable sockets being installed last year may be a stark reminder to the those who use it that the sixties have long passed; the walls, bookshelves, seats and desks remain in the most part the same. “What’s strange is how parts of it are exactly how it was in 1967. While upstairs, you mightn’t have heard the tapping of people on their MacBooks, the look and feel of it is exactly as it was.” Other brutalist counterparts built at the same time, such as Apollo and Hawkins House face destruction in the current age.

Trinity Library is a legal copyright library under both British and Irish Law, meaning that it is entitled to a copy of every book published in the United Kingdom and Ireland. According to Sheaf, that averages out at Trinity being the proud owner of around six and a half million books. Many of which are currently held in storage in the Santry Book Depository.

To celebrate the Berkeley’s fiftieth year anniversary, since its opening by Éamon De Velera in 1967, a number of events around the theme of the Berkeley itself, it’s architecture and partnership with various schools within the college are being held under its roof. One such event, celebrated the fiftieth anniversary of the commercial production of the Moog synthesiser. Three nights of gigs involving poets, spoken word and performances were based around the Moog synthesiser, creating a preternatural, psychedelic world. The students from the Lir Academy later went on to have a silent performance, set in the sixties that guided the crowd from one area of the library to the next. Last month marked the launch of the fourth issue of FRANC fashion magazine, a bookish fashion magazine founded by Briony Somers and Lauren Henshaw, two Trinity College graduates. The year concludes tonight with projections onto the library depicting how both the library and this year came to be.

As the year of celebrations draw to a close, it can be said that instead of growing weary with the passing of time the celebrations have given a new vitality to “the incredibly well designed” Berkeley Library. The Berkeley has continued to flourish and remains a constant inspiration to those who pass through its doors to be as daring right now as they were in 1967. The interview with Sheaf ended with him expressing his opinions on what might lie in store for the Berkeley Library: “I have a suspicion that if people were to come here in fifty years, they would still be able to recognise the Berkeley as the Berkeley.”