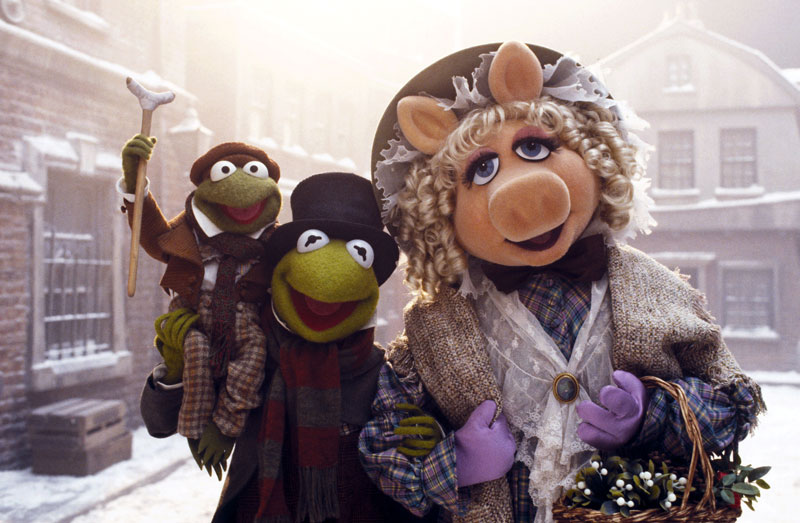 Most of the aspects of Christmas as we know it originated in 19th-century Britain. A cursory online search for “Victorian Christmas” shows a plethora of articles explaining just how many modern-day Christmas traditions can be traced back to this time, encompassing everything from the idea of Christmas cards, decorations and crackers to the idea of bring family together and spreading cheer.

Our curiosity for all things Victorian never seems to ebb. The BBC show Victorian Farm followed a team as they lived like Victorian farmers for a whole year. But it was the show’s Christmas special that really caught my attention, offering tips on how to recreate older traditions in order to create your own Victorian Christmas (which you were probably doing already in some way, minus the lace bodices and top hats). The show credits the continuing popularity of these Christmas traditions to one book and one book alone: A Christmas Carol.

Even considering its great popularity at the time of publication, it’s hard to believe that a book published in 1843 still has as much of a cultural impact as it does now. The book has been printed and reprinted through the years, performed on stage and on radio countless times and even inspires a number of fairs all around the world. By tracing how the book has been moulded and reshaped in more modern adaptations, hopefully we can pinpoint why the book essentially acts as the rule book for the concept of the Victorian Christmas and, by extension, our own modern Christmas celebrations.

Charles Dickens sought to capture and call attention to the plight of poverty in Victorian England in much of his writing, which was no doubt the intention behind A Christmas Carol. Ebenezer Scrooge acts as a figurehead for the oppression of the working classes (not the jolliest phrase but bare with me), and his run-ins with various ghosts and sickly, working-class children act as moralistic parables. Dicken’s instructions to society couldn’t be clearer: look after your poor.

The motivation, of course, is common throughout Dickens. But this novel in particular associated the idea of fairness and compassion with Christmas. Whilst the book makes no mention of St Nick or Christmas trees, every iteration – in radio, film or TV – has sought to keep those ideas central.

Speaking of modern adaptations, I wish I could say that my first encounter with A Christmas Carol was something a little more refined than Scrooge McDuck, but such is the way. To clarify, it was Scrooge McDuck playing Ebenezer Scrooge, alongside Mickey Mouse playing Bob Cratchit (Scrooge’s overworked, underpaid, yet still morally upright assistant), in Disney’s 1983 short Mickey’s Christmas Carol. This is an important distinction, as the decision to use recognisable characters helps children to become more interested in what they’re watching, and it’s easier to impart the morals intended by Dickens through pre-established “good guy” characters such as Mickey Mouse. We saw this trend again in 1992’s The Muppet Christmas Carol, this time featuring a cast of well-known talking animals alongside a jarringly human Scrooge played by Michael Caine.This version adds a few more rowdy gags and tunes than the previous adaptation, and there’s a very distinct sense of trying to appeal to both child and adult in its humour. The moralistic aspect of Dickens’s work is so intrinsically tied to the plot itself that it still forms a major component of the film, despite the Muppets.

Interestingly enough, Disney made a third foray into adapting the tale in 2009, with Jim Carrey playing Scrooge in a slightly grittier version of the tale, and no cute animals standing in for anyone this time. Critics tended to dislike the film for its apparent lack of Christmas spirit and jolliness. However, you could say that the lack of talking mice makes this a slightly more realistic version.

There are a number of similar adaptations (A Flintstones Christmas Carol and A Sesame Street Christmas Carol come to mind), along with less child-friendly, more modern versions. In 1988’s Scrooged, the Scrooge-like Frank Cross (Bill Murray) is a big shot CEO of a television company putting on a production of A Christmas Carol who (surprise!) learns the error of his inconsiderate ways just in time for Christmas Eve, and in 2009’s Ghosts of Girlfriends Past, Scrooge-adjacent Connor Mead (Matthew McConaughey) also learns to consider his fellow humans, albeit with more relationship-focused, rom-com flair.

Considering both the content of the book and its more recent re-incarnations, one could take a guess at what it is about A Christmas Carol that makes it so intrinsically linked to the idea of Christmas spirit to this day.

It’s not necessarily the baubles or Santa, or even the idea of gift-giving (nor the lace bodices and top hats). The one aspect of Dickens’s original tale, which runs through each re-iteration of the story, is the idea of learning to be compassionate and kind, a timeless aspiration for every generation. So when someone strives to recreate the perfect Victorian Christmas, they could certainly be referring to those recipes and make-it-yourself decorations scattered all over guidebooks, or they could be looking for that universal feeling of happiness exemplified in Dickens’s pivotal work.