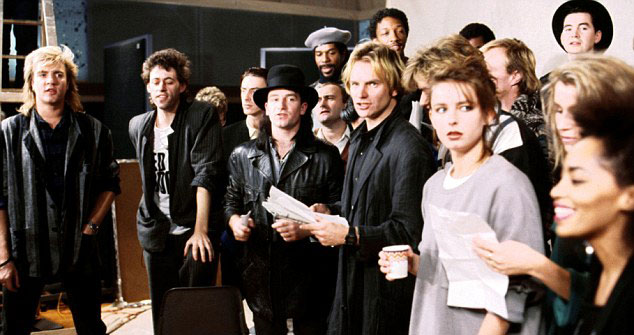 You might have noticed, despite the warm weather, that it’s December. The grouchiest colleagues and most pedantic of friends will have lost their leg to stand on. No, it’s not large retailers ushering in the shopping season to drain our wallets like a thirsty engineering student that’s made it all the way up to the Hamilton library in a single go, draining their can of Monster before heading in. It’s not even your over-eager course mates who donned their cardigans as soon as Halloween ended. Christmas is officially here, and that means one thing.

Topping the charts for the Christmas period was, at one point, the Holy Grail of the music business. Get your song certified a festive classic, and you were set for life. Shane McGowan hasn’t had to work for decades. Bob Geldof makes a cheeky small fortune year after year. Why? Because we just cannot get enough of our Christmas songs. Mariah Carey on the radio is as essential to mine, and many others’ Christmas enjoyment, as a new pair of socks and a sweater from your aunt. Up there with hitting my annual quota of cranberry sauce within four days, jingles and carols are a necessity for the holiday season. They are the special spice, the sprinkle of nutmeg over the season that makes it so magical.

But what really makes a Christmas song? Better yet, what makes a Christmas song a classic? Last year, Vox posted a video on its Youtube page claiming the existence of a special Christmas chord, appearing in standards like “White Christmas” and “All I Want For Christmas”. How nice an idea it would be, a musical on-off switch that makes melodies merry. Adam Neely, a Youtube musician and musical theorist, argues in response that a mix of musical styles of the 1940s, 1960s, and 1990s to create something timeless gives Mariah her yuletide radio dominance. Furthermore, he alleges the bittersweet sound of major and minor chords sandwiched together creates an emotional tension that gives Christmas songs their signature bittersweet sound – of knowing you are in the Good Ole Days, and they will eventually come to an end.

Either could be true, as they both allude to the same thing – we have grown used to these sounds, and have mentally catalogued them, filed away next to Mam’s brussel sprouts and Christmas lights in the Christmas tradition inventory. What makes a Christmas song a classic is our relationship with the song. So deeply connected are we to these Christmas standards, that they give off a potent scent of poignancy and nostalgia, even when they probably shouldn’t.

Take “Driving Home For Christmas” by Chris Rea, for instance. The soft, warm vocals and tinkling piano draw you in until you feel like you are sitting next to him in traffic, just trying to make it home for the holidays. It is my favourite Christmas song. I can put myself in Rea’s shoes, and feel his struggle to see his loved ones to the point where shudders go up my spine as I imagine car lights going by in the falling snow. This is impressive, considering I have never been at risk of missing Christmas, getting stuck in traffic in the snow or, indeed, driving a car.

For many of us, Christmas stands as a cultural focal point around which a good chunk of the year revolves. The shared cultural experience of seeing the lights on the high street turn on for the first time, a sit-down meal with family and perhaps a present or two – you know, the American sitcom stuff – gives us a pause to reflect on the most wonderful time of the year. Nothing is more communal than Christmas, and that includes the songs. We are all well-versed in the subject matter of these songs – Christmas itself – to the point that we can step into the singer’s shoes no matter what it is they are actually singing about.

This can be quite a few different things. Jona Lewie wanted to come home from the frontlines of World War I for Christmas, East 17 wanted you to stay another day, and Eartha Kitt only wanted a light-blue convertible (she has been an awfully good girl this year, to her credit). To varying extents, Christmas songs invoke feelings in us by tapping into things all Christmas-observing folks can relate to – spending the holidays at home, with friends and family, with a loved one, looking forward to what’s going to be under the plastic Christmas tree that’s been used for 15 years at this stage and is starting to smell. Oh, just me then?

The Christmas classic can, better than anything else, snap you back into that same childlike wonder as when you looked out your fogged bedroom window and it still didn’t snow like your mates had been telling you it would since November, but you’ll take it anyway.

Our memories of those classics are what make them classics. Screaming “it’s Christmas!”, adding words to “Rudolph the Red-Nose Reindeer”, and using “Fairytale of New York” as an excuse to use actually quite problematic language in a school carol service. Whatever tops the charts this Christmas won’t have a back catalogue of rose-tinted memories to power it.

What makes a classic so special is that you can always rely on it to complete the picture. You wouldn’t trust your dinner party with anyone other than Duke Ellington and Miles Davis, and you wouldn’t let anyone guide your Christmas party but Nat King Cole. It becomes a self-fulfilling prophecy. We heard these songs all the time because they were classics. We play them all the time because they still are.

It’s interesting then that no song has reached the heady heights of the bonafide Christmas classic for quite some time. X Factor hasn’t had a grip on the Christmas Number One for a few years now – thank God for that – and we don’t find Justin Bieber being added to the mix when relatives come over.

This is a shame, as some very good alternative Christmas songs have come out recently. Not every Christmas song becomes a classic. Indeed, not all can. As fun as it would be to see your Nan get down to “A Christmas Fucking Miracle” by Run the Jewels, or “Oi to the World” by No Doubt, it’s not going to happen anytime soon. Watching Die Hard is that weird holiday tradition some people have, but no one has room for two. But at least you still have the same old standards to rely on as John McClane jumps from the roof of Nakatomi Towers, and you pass around the ever-shrinking tin of Roses.