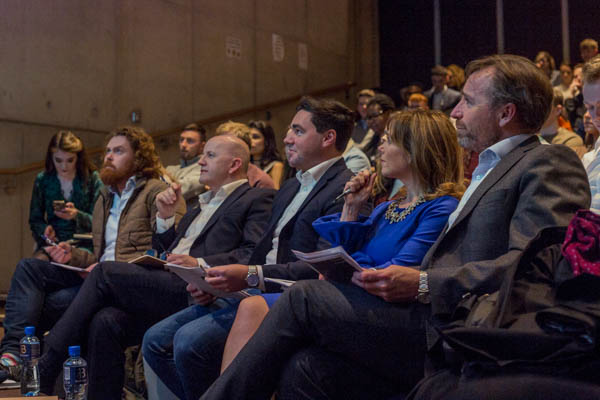 We experienced a whirlwind of entrepreneurial energy, ideas, discipline and style on Thursday night in the packed Synge lecture theatre in Trinity. It was, of course, the final of the Trinity Entrepreneurial Society’s (TES) flagship event, Dragon’s Den, with a handsome prize fund of €10,000 at stake.

Six teams were lined up to do battle through six five-minute pitches, each to be followed by a questions and answers session by the panel of five highly experienced entrepreneurial judges. These included three from RTE’s Dragon’s Den, namely Sean Gallagher, entrepreneur, and former presidential candidate; Eamonn Quinn, former Deputy Chairman of Superquinn; and Alison Cowzer, entrepreneur and co-founder of East Coast Bakehouse. In addition, there was Gene Murphy, Bank of Ireland Entrepreneur in Residence; and Zack Dutton Co-founder of the venture capitalist firm Unifund.

When I took my seat down near the front of the auditorium, the looks of determination and concentration on the faces of the team members as they assembled in various locations around the front rows told it all. So much work and preparation go into each of these seemingly short five-minute pitches. This includes condensing weeks or even months of work into such a short timeframe, turning complex content into simple graphics and dividing five minutes effectively between team members.

On top of getting all this right, one has to come across calm, smooth and convincing to impress such experienced judges. It is quite a challenge, and all six teams rose admirably to the occasion based on the feedback from the panel and the genuine applause from the packed lecture theatre.

The first team up was Roundup, which is developing a clever app intended to make it easier for the public to roundup electronic payments to the nearest euro for donation to their favourite charities. The Roundup team explained that one could get a monthly update or statement explaining how much one donated through this method and to which charities, and one could change what percentage goes to which charity or turn off the facility at any time. The logic of the app is to provide charities with a more efficient mechanism for fundraising than many of the current traditional methods. It also gives the conscientious consumer a convenient means of donating, which they control and monitor.

The second team was Luminary Hub. Their initiative aims at tapping into the large network of tech-savvy undergraduates around the country to provide a quality yet cost effective web design service to smaller businesses. At the same time, it allows these young techies to hone their skills and build up an impressive portfolio. Clearly from the portfolio on their own website they are making good traction with this idea already.

Next came the Greener Globe team with a shower head designed to help with water conservation. It is a LED-timed shower head, turning the water from green to amber to red, with red indicating your time is up. One of the judges quipped “you would need to modify it with a flashing light and loud alarm when your time is up in my household”. The team is following up on patenting possibilities and exploring licensing opportunities.

The fourth pitch was from Muapp – a Beauty Solution. The app from the team will allow one to find a make-up artist to your taste nearby in a simple and convenient manner. For the make-up artist, it will also simplify the process of finding and billing clients, while the team takes a five per cent cut. The judges noted that it was two guys fronting this beauty solution startup, asked what attracted them to this idea. The reply? The “insane amount of money spent on hair and make-up” by some female friends.

The fifth pitch and overall winner of the competition was Applaud Events. This startup provides its customers with a network of quality musicians enabling one to source a suitable performer for one’s event, whether it be a corporate function or a wedding. It can provide for a broad variety of tastes, from a string quartet to a pianist or a DJ. The value it intends to bring is through streamlining communications in sourcing and engaging a suitable performer, and a certain security concerning payment for both the performer and customer. Applaud Events will earn its revenue through commission, and intends to start small with Ireland first, then also the UK. As the winning pitch, the judging panel clearly sees potential to upscale this startup. The well-deserved seed money will hopefully help in this process.

Speaking to The University Times after the event, the company’s founder, Luke Cullen, said he was very pleased with the result and what it could do for him and the team. Cullen is in third-year studying English literature and history. He is a talented musician, has a passion for music and now clearly also a passion for business. I asked him about what winning this competition meant for him and Applaud Events. “Winning this competition gives validation to the idea. It will greatly strengthen our hand when we approach potential investors”, he said. Regarding next steps, he hopes to do a business accelerator course over the summer and to “automate our MVP website into the equivalent of Airbnb or Tripadvisor”.

The runner-up pitch in the competition was Uniblock. It stood out from some of the other pitches in that the team consisted of only one person: Hanna Lynch. She is studying law and business and has identified a very real problem: the slow process around validating qualifications on CVs. Particular sectors such as the financial, legal and healthcare sectors often require strict validation of qualifications and this can be a slow process, resulting in delays and costs for the intending employee and the organisation trying to do the hiring. Uniblock is developing a system using Blockchain technology that will allow qualifications on CVs to be validated much more quickly through an accompanying public key. She believes the relatively small number of Irish higher education institutions makes it quite a manageable country to get all concerned on board with such a tech solution.

Speaking to The University Times after the competition, Lynch said she was delighted with the “additional validation” the competition gives her idea. She said she’s become fascinated by the tech world and the possibilities that technologies like Blockchain provide. “Until recently I never would have thought of working for myself, now I see it as a real possibility”, she said. She will spend the summer exploring more about the possibilities of Blockchain with a Deloitte Blockchain lab in Dublin, and looks forward to “further validating the idea, building a team and sourcing investors”.

Lynch participated in the LaunchPad Sprints in November 2017, as did Cullen with the winning pitch above. Lynch has also signed up for the recently launched undergraduate module in innovation and entrepreneurship. When you see the professionalism of the pitches, the thoughtful ideas, and in many cases small businesses actually up and running, it is clear that the emphasis on innovation and entrepreneurship in Trinity is having a very real impact on these students.