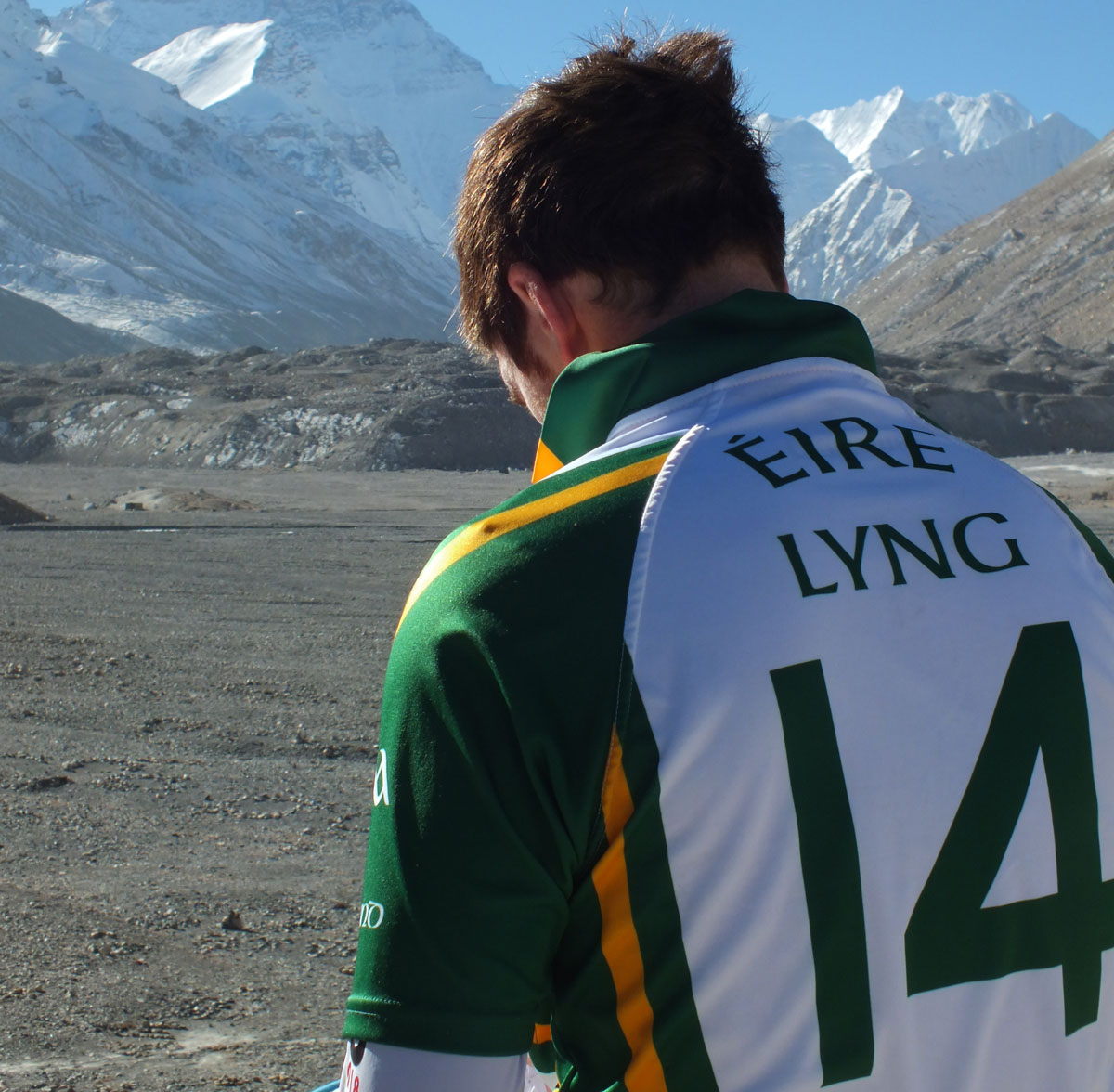 Former Wexford hurler Diarmuid Lyng has never been afraid to go against the grain. He talks about his battle to reclaim his identity.

If 800 years of fighting, fury and failed rebellions have taught us anything, it’s that Wexford men are not an agreeable sort. A blend of Norman and Viking blood has given rise to a fiery people who pride themselves on stubborn determination, grounded in an unshakeable desire to do things in their own unique way. Put simply, the status quo doesn’t sit easy. Diarmuid Lyng, a former Wexford Senior Hurling Captain, is an fine ambassador of these qualities.

To fans of TG4’s GAA coverage, Lyng will be an instantly recognisable figure, standing on the sideline, sporting a seemingly permanent grin peering out from beneath his distinctive bushy beard. One of the most naturally gifted hurlers of his generation, Lyng typifies the warrior spirit of his county, whether that is as a sportsman or as a social campaigner. He is currently leading a protest movement against the government’s approach to homelessness, and of late he has emerged as one of the leading voices against the GAA’s notorious Sky deal. Never one to blindly accept consensus, he is one of those rare breeds of people who are prepared to step out of their comfort zone and leap into the unknown. In 2010, and at the prime of his hurling career, Lyng stepped away from the Wexford senior panel to travel the world, having struggled with a viral illness for three years. While many at the time were perplexed by his decision, Lyng explains to The University Times that he felt it was his only option.

“I wasn’t really enjoying it anymore”, he admits. “I lost the “grá” for it and my body was particularly compromised. I could see the game in the same way, but I couldn’t move in the same way and that led to a frustration with myself and then that extended out into a frustration with individual moments in games, with my teammates, with gear, with county boards and expenses and everything, frustrations ran though everything.”

Ultimately, the decision was motivated as much by a desire to escape the unhealthy stranglehold hurling held over his life as the frustration he felt with the game. “I could see there was an intensity with my relationship with the game that wasn’t very healthy”, he confides. “It was more about reaffirming my identity than it was about playing a game, and that’s never a healthy way to be in relation to things you love to do, because when you begin to depend on it to reinforce your identity you’ve lost your own sense of identity.” For Lyng, stepping away from hurling marked the beginning of a deep introspection as he travelled, examining his place in Ireland and his relationship with its culture. Leaving home allowed Lyng to challenge the entire core of who he was, and more importantly, what rural Irish society expected him to be.

Most people at some point in their lives grapple with what it means to be Irish. For many, Lyng represented the physical manifestation of a vague, traditional and nationalistic understanding of Irishness. Master hurler, keen Gaeilgeoir, dedicated teacher. However, the man himself was never entirely at ease with this assigned role. When I ask if it was hard to break away from this life, Lyng is assertive, long having made peace with his decision.

“I didn’t really feel like I had a choice”, he begins. “It wasn’t this brave decision. People said afterwards it was very brave to walk away, but I mean it wasn’t. I knew I was 28 and that is prime time as a hurler because the body is still able to do what it needs to do but you’ve got the seven or eight years of intercounty play so that’s the perfect balance to really get the most out of yourself. I didn’t feel I had achieved as much as I was going to achieve in the game, so from that perspective maybe [it was], but really there was no choice in it. I had to leave, I had to do something. In terms of the identity that was difficult alright, I was dependent on it, but that’s only a surface thing and you begin to live from deeper parts of yourself, so that’s quite important. I’m sure it wasn’t very comfortable in that, that I didn’t conform.”

This battle with a sense of personal identity and belonging has given him a unique insight into how we interact with Irish culture. Few people have examined that culture, all valiant virtues and fatal flaws, in the way he has, resulting in a view of Ireland untainted by conventionality and conformity. As we chat, his distinctive Wexford accent infectious as ever, we cover an eclectic range of topics, from the gradual professionalisation of the GAA to the threat of the ash dieback, all the way to the soul of Gaelic Games, a topic which Lyng addresses at length in his enthralling TedX talk. A masterful conversationalist, Lyng is amicable and self-confident, unafraid to offer a controversial opinion or two, which even he accepts may be “hippy or bananas”. 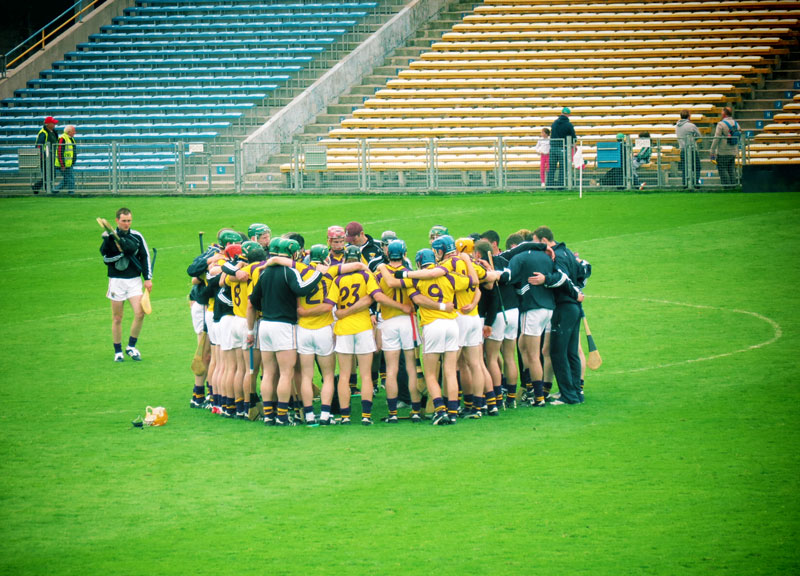 Lyng and his teammates before a game.

Having cut ties with the Wexford hurling panel, Lyng travelled the world, building up a storybook of adventures, from staying in a monastery in Tibet to exploring the beautiful coastline of Vietnam, all the while documenting his travels in a remarkable video called “Hurling around the World” for the World Sports Team charity. His exposure to such a wide range of cultures clarified things for Lyng, opening up “a new way of seeing probably the same things”.

Lyng accepts that he “definitely changed” on his travels, and some family and friends struggled with something of a culture clash upon his return. “We like certainty as human beings”, he notes. “So when you come back and you don’t talk in the same way and you look at things a little bit differently and you don’t define yourself and dress yourself the same way that’s destabilising for everybody around you.” However, he admits that he wasn’t the easiest person to live with on his return. “You think everybody else is wrong and you think everybody else hasn’t it figured out. That’s probably the greatest error of the greatest mistake you can possibly make”, he confides. Nonetheless, the St Martin’s clubman was never afraid to go against the grain and he persisted with his new outlook, while working to reconcile it with his old life at home.

While travelling in Asia, Lyng developed an interest in yoga, and continues to practice it on an almost daily basis. Despite a limited historical presence in Ireland, he recognises spiritual similarities between the ancient art and our own sporting culture. “Yoga is a much more focused and a deeper power”, he explains, turning, as he does so often, to the GAA for comparison. “Tommy Walsh, I don’t think he practiced yoga, or maybe he did, I don’t know. But when you are tuned into that deeper side of yourself, which I think he was, when you’re tuned into the joy, just wanting the ball and wanting to play and that was written in every single step that he took and ball he struck. That’s what yoga and meditation and these things do, just tune you into something deeper and when you work from that end of yourself, the power that comes from that end of yourself is far greater than physical strength that you get from lifting weights. It’s a deeper power that’s not necessarily easy to understand for people who are in the gym working hard night after night.”

As we chat, I soon notice that long, tortured pauses are commonplace with Lyng, the silence over the line broken only by the low rumble of his newly purchased 1990s VW Camper van. At times his slow response lends an infuriating air of apathy to the conversation, to the point where I wonder if he is simply uninterested in the question posed to him. I quickly realise, however, that he is not a man taken to brash, Trumpian statements. He considers every question forensically, carefully formulating his response. Fascinatingly insightful answers are interspaced with meandering tangents which touch on just about every challenge of modern living, before he checks himself with a quick apology, returning to the matter at hand. Nor does he pretend to have all the answers, often questioning the wisdom of his own responses before I have a chance to follow up. I walk away struck by the distinct impression that Lyng is a man whose intellect is simultaneously his greatest asset and worst enemy, his mind seemingly eternally at war with itself as he navigates life’s myriad obstacles.

It is in his examination of the changing role of Irish in his life that I finally grasp what an understanding Lyng has of the importance of culture, and how it has impacted on the unique way in which he sees the world. “I’m not fanatical about Irish, I’m not nationalistic in any great sense”, he offers. “I do think, and this is just my experience of the Irish language, it came to life inside me. It wasn’t something I learned outside, it was something that came to me inside of me and began to come out of me, and when it came out of me it allowed me to see the world and see the place I live in and the people I live with in a different way.”

“And it’s a time where we need a grounding, the people of Europe, when you look at America for example where it’s all pie in the sky, up in the air, hate and stuff, a grounding is what’s really necessary and we have a role to play in that.”

As the interview draws to a close, we stay on the line chatting for a few moments. I mention a comment made during Lyng’s appearance on RTE’s The Geansaí, where Eoghan Quigley, a former Wexford hurler and lifelong friend of Lyng’s, pointed out the perceived divergence of Lyng’s two personalities, with Gizzy the sports star taking a back seat to Diarmuid, the free thinker, in recent years. The line had resonated with me at the time, but as the interview concludes I put it to Lyng that his journey is more aptly described as a battle to reconcile these two aspects of his personality, two competing cultures. It’s a throwaway comment that hits a note with the former teacher, who finds time to offer a final gem of wisdom before jetting off.

“I think that’s the most valuable point you could possibly make to be honest, it’s about integration”, he says enthusiastically. “I definitely ran from that Gizzy nature that I had traded on for so long. But I think that was the realisation, when I finished up in Vietnam on the beach, I had this moment of clarity, I think I had never banished that part of me, you can’t banish your ego to non-existence. It’s the integration of your ego, it’s the acceptance of your ego, it’s accepting what’s there and the awareness that it’s there is what dispowers it. I was at that stage trying to do away with myself. Definitely that clarity was there after watching The Geansaí for myself, even if that’s more about integration and understanding parts of myself.”