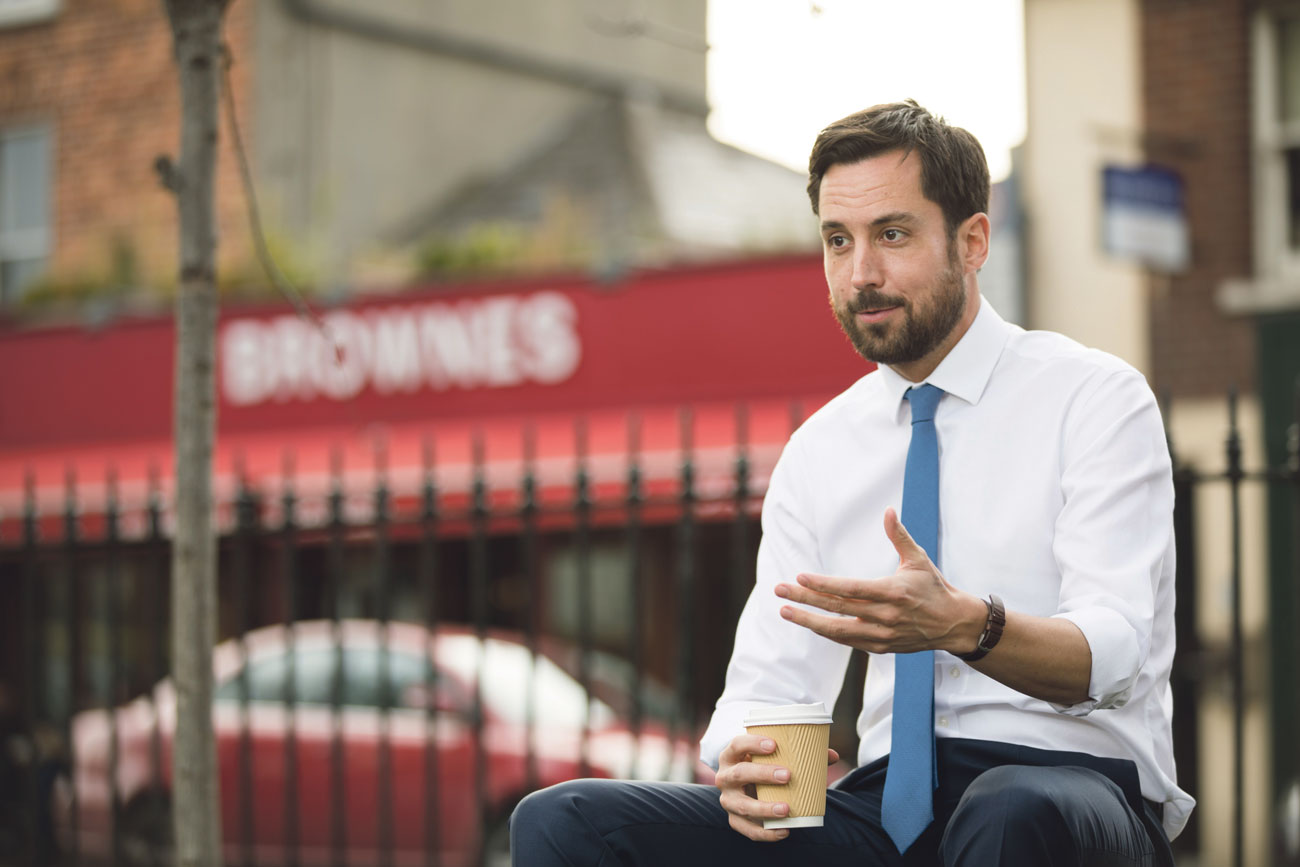 Eoghan Murphy is the man behind Varadkar's rise. But is there substance behind the style?

Eoghan Murphy wasn’t always a household name. For years, he lived in the shadow of his brother Killian’s role in RTE’s Love/Hate. Now, as a Leo Varadkar loyalist and cabinet minister, he’s trying to find his placed in a love-it-or-hate it government.

Murphy might be well placed to strike a chord between ambivalence and adoration. As Minister for Housing, he’s well used by now to being the target of scorn as he grapples with the homelessness crisis. But he’s also young and socially liberal – important currencies in the new “avocado lads” administration.

At just 35, Murphy is a particularly young face in an office that must tackle homelessness, public housing and house prices. All are areas where the government regularly faces damning criticism.

Yet when I meet him, Murphy seems remarkably confident. Maybe he knows how these interviews can go – he used to write for University College Dublin’s University Observer. If his quips are hiding some kind of panic, Murphy certainly doesn’t let it show.

When it comes to the housing crisis, he describes the solution as simply involving planning and incremental change: “You don’t just think up a policy in your head and just go for it.”

His job, he explains, is “to try and come up with policy responses and even though they are criticised if you believe that this is the best response you can put in place you have to just go through with it and you hope that people will then start to see the benefits of it”. He argues that “it’s not about dramatic changes in policies, it’s about coming up with an idea, piloting it and then if it’s successful rolling it out more broadly”.

But incremental change can only get the government so far. Rebuilding Ireland, the government’s long-term plan to solve the housing crisis, has consistently failed to reach targets, with only 650 of the proposed 2,200 social houses being built in 2016. The response to the homelessness crisis has been similarly lacklustre. Responding to such arguments, Murphy remains defiant.

“It’s not that it doesn’t take dramatic changes. You could say in Rebuilding Ireland, which is our housing and homelessness policy response, that that was a dramatic intervention”, he says, describing the programme as “quite a dramatic stepping in and saying ‘this is our plan to fix this problem’”.

“If we believe we’ve the right policy tools it’s about just making them work harder for us. And then you do some things actually that are a bit more dramatic like the new things that we want to do around high rise in Dublin”, he says.

Specifically, Murphy wants to see higher buildings to house more people. But these plans have faced significant criticism, with Chairman of the Government’s Housing Agency Conor Skehan describing them as an attempt to “fix the engine in the middle of the flight”.

When it comes to the housing crisis, Murphy claims to perform a balancing act between public and private sector solutions?

Yet today, Murphy remains optimistic: “When I look at planning and when I look at housing we can solve a lot of problems around climate change, around transport, around the cost of living for people, around quality of life if we build the right homes in the right places.” Murphy regularly responds to questions like this, reaming off information that is sometimes only tenuously linked to the original question. His knowledge on the issues within his remit can’t be faulted, but you sometimes get the sense it’s used to evade, rather than enlighten.

When it comes to the housing crisis, Murphy claims to perform a balancing act between public and private sector solutions. He has often been seen as one of the more right-leaning members of Fine Gael, and his early backbencher days saw him fighting against public sector pay increases. When it comes to regulating rising rents, he says: “I think we’ve got to be careful about doing something that’s akin to say rent controls and rent freezes because we’ve seen in other cities how that hasn’t worked and actually affected more landlords leaving the market and then putting pressure on supply.”

For those being priced out of the market due to ever-increasing rents, these remarks may seem flippant, naive even. If Murphy is aware of this, he carries the remarks off with a trademark sense of self-belief.

Economics and politics aside, Murphy is perhaps an unlikely candidate for a role so entrenched in Irish politics. “My family would always talk about politics but we weren’t party political so we would have those kind of debates at Sunday dinner but we were never actively involved”, he says.

After studying for his degree in English and philosophy at UCD, Murphy went on to work in international arms control with the UN. It was here, he says, that he began “getting more interested in the political decisions that were being made”. 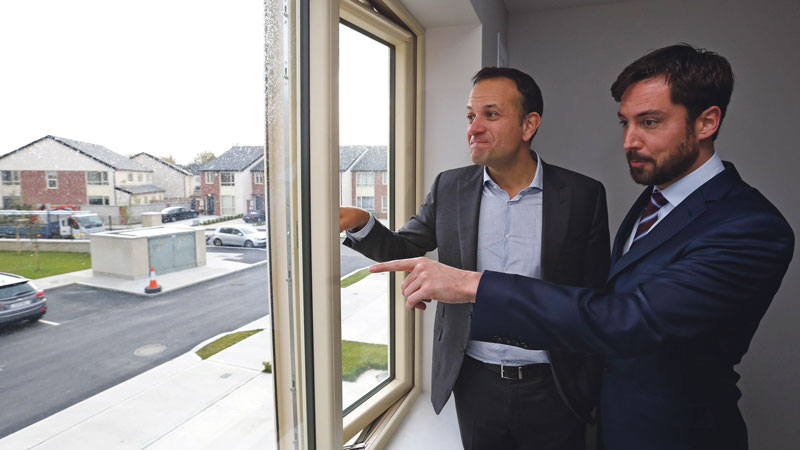 Murphy soon found himself running for election in 2011 and has since served under both the Fine Gael–Labour coalition, and the more recent minority government with Fianna Fáil. Though he’s careful not to “party bash”, as he puts it, it’s clear that these arrangements have made things difficult for Fine Gael, and he describes the co-operative approach of government as something that requires “close policy alignment on some fundamental issues”.

Despite this, he claims that anything can happen, within reason: “I sit here and I go ‘no, no, Fine Gael could never be in government with People Before Profit’ but maybe one day in the future, maybe it’s 100 years away, it might happen. But there are certain positions, for example Sinn Féin, that Fine Gael will never go into government with Sinn Féin.”

Murphy is quick to stress his individualism – he’s no blind follower of Fine Gael and he says he’s often been “tested” by his party. “I was always aware that there was a disposition towards Fine Gael in my house because of Garret Fitzgerald. So if I knew two politicians growing up it was Garret and Rory Quinn.”

It’s clear that Murphy sees himself in the tradition of great reformist politicians – when asked for his political idols he waxes lyrical about Bobby Kennedy’s “passion for civil rights” and praises Barack Obama, of whom he has two posters hanging in his office.

Murphy hasn’t been shy about his own liberalism. In his days as a Fine Gael backbencher he was widely seen as the ringleader of the so-called “five-a-side” group of Fine Gael TDs who lobbied for parliamentary reform and acted as a thorn in the side of the party’s leadership.

He’s also long been forthcoming on issues as varied as religion and Whip reform. Murphy says of this period in his political career that he “was never critical of his [Enda Kenny’s] leadership or of the direction the party was going”. Instead, he feels the way the party operates can sometimes hinder discourse: “It wasn’t a criticism of him, it was actually just an attempt to have a mature policy debate around certain issues.”

Certainly, Murphy doesn’t come across as a minister who watches his words. He gives the impression of someone speaking off the top of his mind and speaks quickly, often having to correct himself, or trailing off and starting a sentence anew. He puts his outspokenness down to personality: “I couldn’t have been a politician unless I was saying what I believed, I just couldn’t have done it.” This has naturally posed challenges for him throughout his career: “Sometimes you do have to recognise that something has to be done for the good of the country and though you might not agree with it you have to go with it and sometimes you feel you’ve got to say something that might be at odds with your party’s policy.”

This tendency to speak his mind has lead Murphy to voice his support for the repeal the eighth campaign. Varadkar dithered on the issue for months, finally coming out to back repeal.

“I don’t like the pro-choice pro-life kind of false dichotomy”, Murphy says. “I don’t like it because then it means you’re tying it to saying other people are anti-life or something.”

He describes his own stance as “what would have been considered a very liberal view in the party when I first came in”. He adds that “the party is a broad church but we had a kind of liberal wing and we were trying to make progress in this area”.

Although Murphy doubts he’ll campaign “door-to-door per se”, he does intend to “give people information if they want information” and “answer their questions if they want questions answered”. His work will also involve “going onto the radio and putting forward the position of the government and debating and doing all that stuff”.

The emphasis Murphy places on campaigning is indicative of the breed of politician he represents. He was an early adopter of social media and, like Varadkar and his multi-million euro communications unit, knows how to carve out a public image.

I spoke to Murphy just before the scandal over newspaper advertising and the government’s communications unit had hit its peak. At the time, he certainly saw the value in good communication. “I think it’s really important that a government communicates with the people who elect it and it communicates with the taxpayers who fund all the services and all the different things we do.” He claims that a number of younger TDs “use new communication tools to break through the political bubble to get to people who might not normally think about politics. And any new person we get to think about politics I think is a bonus whether they’re voting for Fine Gael or not”.

Ultimately, Murphy strikes me as an interesting, if perhaps contradictory figure in Irish politics. A self-professed liberal who’ll take any opportunity to praise reformers of the past, a communications obsessive who seems unable to shift public opinion in his favour and a hardcore politico who’s still keen to depict himself as a reluctant politician. Either way, expect him to be around for a while.