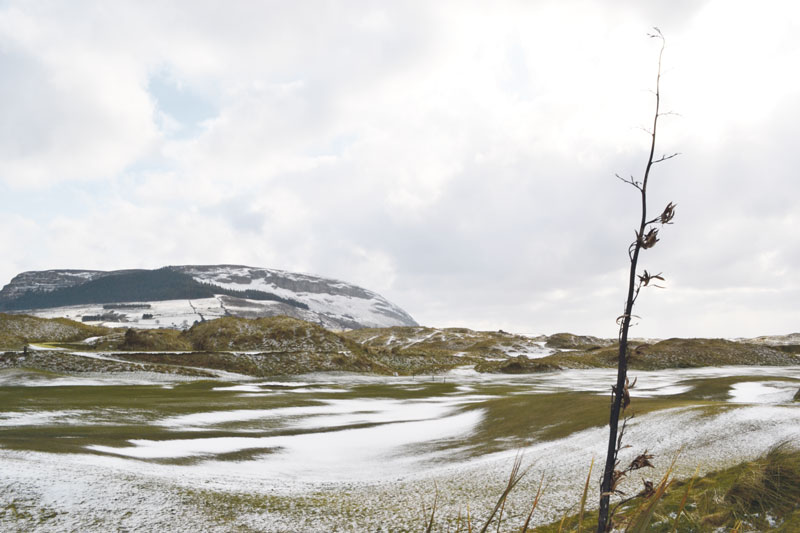 Be careful what you wish for. That’s what I can now smugly say to my friend and travelling companion, who announced on our first night in Strandhill that she never wanted to leave. Being from Germany, she’d also demanded, like many a well-intentioned tourist, that she wanted a real and “authentic” experience of Ireland. Beached in a tiny coastal town amid unexceptional weather conditions while the rest of the country goes into meltdown over sliced pan, I can’t help but feel she got just what she asked for.

I can’t in good conscience blame the Beast from the East for the damning of this particular round-Ireland trip. It was perhaps doomed from the start. That’s not to say we didn’t make the most of our awry plans. In fact, Strandhill in Sligo is not at all a bad place to be stranded in.

What I’ve learned from this is that, while it’s certainly possible to have a good time backpacking through wintry Ireland, the phrase “managing expectations” springs to mind.

My previous experience of the backpacking-on-a-shoestring lifestyle had always involved breezy continental summers. You know, cruising down the Dalmatian coast, eating pastries in the shade of Viennese cafes. OK, sure, there had always been character-building hitches – nights spent on empty train station floors, treacherous bus rides through Montenegrin mountains, being mugged while flagrantly waving my tourist status about – but thanks to a combination of youthful optimism and the same selective memory that leads people to give birth more than one time, I was still excited about doing a similar trip in my own country.

We kicked things off in Belfast, but it wasn’t long before the icy cold, high prices and a crew of unnerving hostel bunkmates broke our spirit. After two long nights we threw in the grimy hostel towel and carted our things to the bus station, pleadingly asking when’s the next bus to Dublin, vowing to come back in the summer. “Strandhill was warm and cordial from the get-go, immediately living up to numerous small Irish town stereotypes.”

As we gratefully skedaddled home down O’Connell St, I was momentarily sad about my lost youth – maybe I’m just not cut out to be a rough and ready traveller anymore? But I was mostly excited about having a hot shower where the tiles weren’t yellow and covered in strangers’ hair.

The uncomfortable reality that student travelling on the cheap might generally be a more pleasant experience when visiting countries less well-off than your own played on my mind. Obviously money goes a lot further in cheaper countries, affording even strapped students a high standard of living. I do believe that, with better research and planning, we might have fared better in Belfast. Still, it’s something to bear in mind.

Our next stop – and, as it turned out, our last – was Sligo. Cradle of Irish literary culture, inspiration to Yeats and birthplace of 3/5 of Westlife. I’d been keen to visit ever since reading Sebastian Barry’s loving descriptions of it in his Sligo-set novel The Secret Scripture.

We’d booked to stay in Strandhill, 20 minutes by bus outside Sligo town, because what better time is there to visit a beachside surf resort than when incapacitating snow is forecast?

Arriving to our seafront accommodation, the only hostel in Strandhill, we were instantly catapulted into a more familiar backpackers’ universe. Happy-go-lucky travellers roamed the lodge singing the town’s praises and extending open invitations to join in on whatever fun was being had. Despite the low temperatures (“Reminds me of Russia”, my friend remarked), Strandhill was warm and cordial from the get-go, immediately living up to numerous small Irish town stereotypes.

History was set to repeat itself. To paraphrase Yeats, things did not fall apart

In the evening, we all squeezed into the nearby pub for an open mic night. The crowd was a mix of locals and long-haired surfers, the sort you might expect to find in California rather than Sligo. Young and old performers alike belted out songs that kept everyone happy, from The Eagles to Pixies to Ed Sheeran.

After befriending some chatty locals, we inevitably got on to complaining about the Dublin rental market and the city’s soaring prices. “Sligo’s up and coming”, a woman in her 20s, who had just moved to Strandhill from Dublin, told me. I smiled because it’s a mantra I know only too well – I used to repeatedly insist the same thing about my old neighbourhood in Berlin, which had notoriously been “up and coming” for over 10 years. Still, maybe there’s something to it. She wasn’t the only young person I spoke to that night who’d recently made the move from the city – maybe it speaks of a growing appeal. People priced out of the city have to go somewhere, plus you’d be hard-pressed to find such a buzzing bar so late into a Monday night anywhere in Dublin.

When things finally wound down, we wandered a short five minutes to the beach to watch the waves crash against the rocks, feeling pleased with ourselves for stumbling upon such a gem.

Strandhill was just as charming by day, with long stretches of coast and sand dunes to walk along, the water a mere stone’s throw from the lodge. Trying to embrace the open small-town spirit, we hitched a lift with a bemused Sligo man to the base of Knocknarea hill, the mountain that overlooks the town.

Within minutes of starting to climb, it began to snow. Luckily we’d learnt our lesson from the cheek-biting winds at the Giant’s Causeway, and were bundled up like eskimos. Being the quiet season, the mountain was calm, deserted apart from the odd herd of sheep. Man-made steps carved a clear, although sometimes vertiginous, path upwards. Atop lay magnificent views of the bay and Sligo’s iconic Benbulbin mountain. The summit is also home to a 10-metre high prehistoric cairn, shrouded in mystery and yet to be fully excavated.

Things were literally downhill from there. It wasn’t long after that we first heard murmurings of the alleged Beast from the East. The wheels of our trip began to slow, with fellow travellers making frantic last-ditch attempts to catch trains and buses out of Sligo. Our own bus to Galway was cancelled.

In the local cafe, tensions were non-existent. “What do you think it’s going to be like later?”, I asked one man eating ice-cream with his daughters. “Calm”, he said. “It was the same a few weeks ago. Nothing happened.” 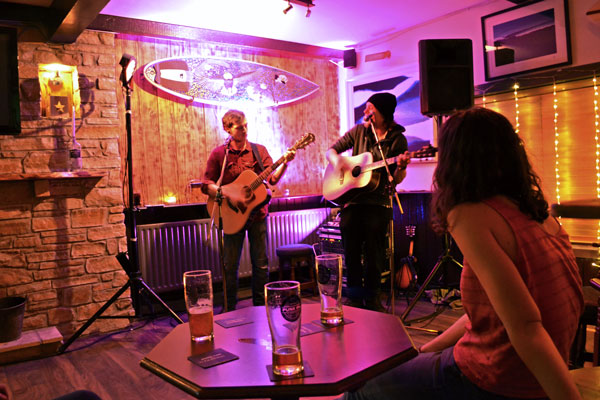 “In the evening, we all squeezed into the nearby pub for an open mic night.”

And indeed, history was set to repeat itself. To paraphrase Yeats, things did not fall apart.

That evening I looked on sadly at the gentle snows outside, feeling left out of all the hill-sledding, igloo-building and post-apocalyptic bread aisle fun happening back home in Dublin. Having been only 14 during the big snow of 2010, I was disappointed to miss Dublin’s first true arctic wave of my adult life. I consoled myself in the knowledge that thanks to exponential climate change, it’ll probably happen again soon.

When the transport system finally geared back up a few days later, we booked the first train home to Dublin. Arriving to Sligo town 20 minutes before it was set to depart, the station was locked and deserted.

My German friend’s head near exploded. She missed Germany, where trains go when they say they will and a few inches of snow isn’t a national emergency. I, on the other hand, was having the opposite experience. Having felt at a loss since coming back from my own time in Germany a few months ago, it was nice to actually be missing Dublin for once.

After a hit-and-miss few hours and a wealth of contradictory information, we finally managed to board a train. While mostly happy to be warm and homeward bound, my friend was naturally a bit disappointed to have missed out the last few legs of our trip – but such is the price you pay, I suppose, for the “true” Irish experience.