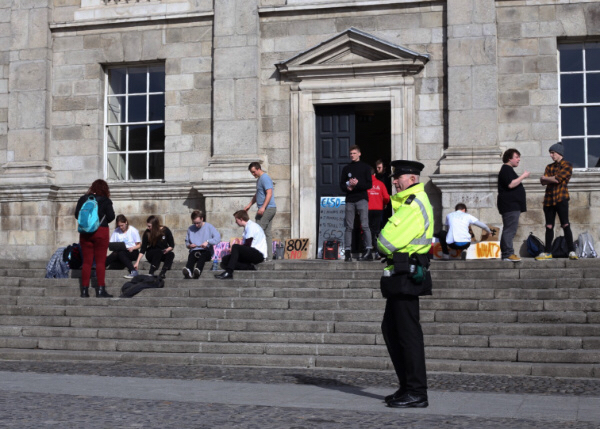 Over 50 students have occupied the Dining Hall in defiance of College’s decision to introduce a €450 flat fee for supplemental exams.

It is yet unclear how long students plan to occupy the hall. The Dining Hall is one of Trinity’s most iconic buildings and today’s occupation marks a significant step forward for the campaign.

In an email statement to The University Times about the occupation of the Dining Hall, the President of Trinity College Dublin Students’ Union (TCDSU), Kevin Keane, said: “This occupation is the clearest sign yet that the students refuse to accept the college’s attitude of squeezing them for every last cent. We are here, because this university exists for its students. This space belongs to the students, and we’re simply occupying our own space.”

Students are occupying the main hall in the building and the foyer that leads into the main hall. As students gathered in the hall, protesters chatted with security and played music on a portable speaker. While students busied themselves with occupying the hall, academics were still being allowed into the senior common room.

In a statement being circulated by the group online, the organisers say that they are “escalating” their actions. “The occupation is to show College that we will no longer stand for the commercialisation of students and to protest any increase to accomodation fees, postgraduate fees or international fees for the provision of full academic year rental”, the statement read.

The action marks the third day of protest from students, who have organised a campaign called Take Back Trinity, demanding the College reverse its decision. Last week, students protested outside House One in Front Square during a meeting of Finance Committee. And, on Friday, students blocked off Front Arch and the entrance to the Book of Kells exhibition for several hours. 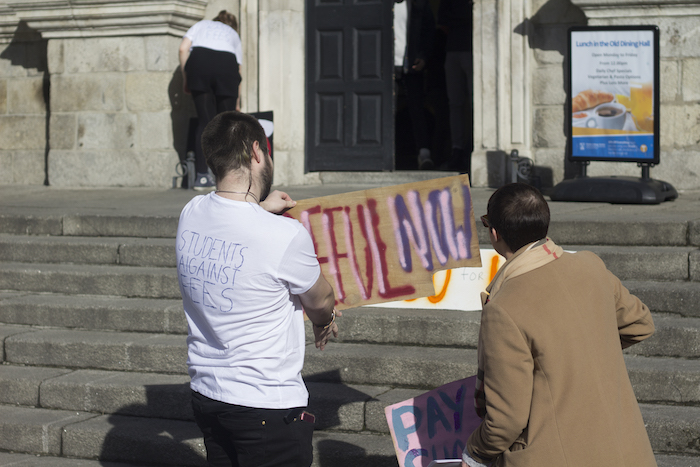 The occupation has spilled onto the steps of the Dining Hall.

While College has been at pains to stress that the decision to introduce fees was fair, students have responded with anger, scorn and mockery. Trinity has yet to comment on the public protests, designed to damage the College’s much-prized reputation.

Scholars and Fellows attend commons – a free evening meal – every evening at 6pm in the main Dining Hall, which also serves lunch and dinner throughout the day.

The action was symbolic, as students have constantly attacked Trinity as caring more about tourists than students themselves. Last week, students posted one-star ratings on the Trinity College Dublin Global Facebook page, as well as preventing tourists from visiting the famous Book of Kells exhibit during a demonstration on Friday. The Book of Kells is one of Dublin’s most famous tourist attractions, as 454,000 people visited the exhibition last year.

Occupations are a tried-and-tested method of protest among students. In November, students in the Institute of Technology Tallaght staged a sit in protest against the college’s decision not to hire a secretary for the union. It was also a tactic used by Queen’s University Belfast students in their bid to get the university to divest from fossil fuels.