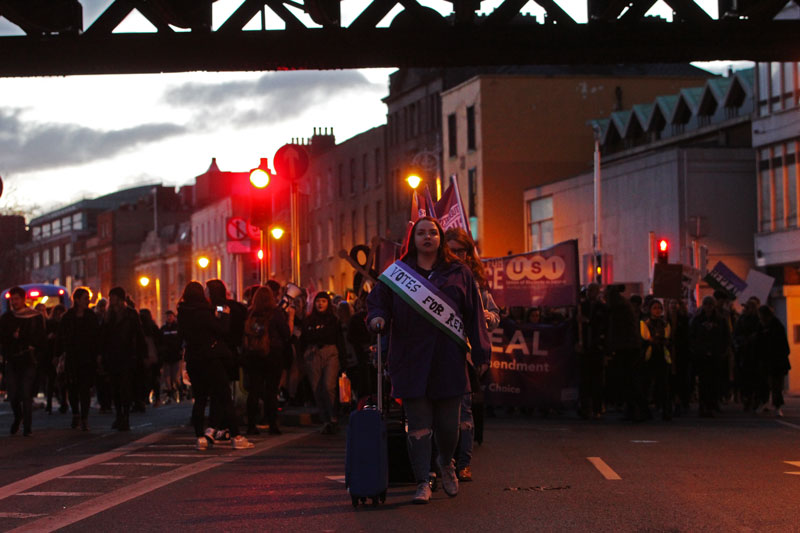 Students joined 8,000 people on the streets of Dublin, in one final push for a repeal of the eighth amendment.

Indeed, many marchers spoke of today as the final International Women’s Day under the eighth amendment. With only months to go until a referendum, today’s march was a radical display of confidence from a movement that has successful pushed abortion rights to the top of the national agenda.

Today, the government agreed to table legislation that will trigger a referendum, weeks after Taoiseach Leo Varadkar took to Twitter to offer his support for a repeal of the eighth amendment.

One of the slogans chanted today by marchers was “Leo Leo, hear us clear, we won’t wait another year”.

Earlier today, as hundreds of students gathered in Front Square to show their support for repeal, speakers pitched today as part of the final battle. At the march, names that have become familiar to pro-choice activists, from Ailbhe Smyth to Anna Cosgrave, couched today as a historic moment to change Ireland’s future.

“The Ireland of the eighth amendment is a relic of the past,” Smyth told the thousands assembled at the Custom House today. “It no longer reflects your wishes, your lives, your desires. I know we never ever want to go back to that Ireland again.” A solitary pro-life protester attempted to disrupt Smyth’s speech. “It is not the first time this has happened, we will carry on”, said Smyth in response. “It has happened before, and will happen again.”

Speaking earlier, the Union of Students in Ireland (USI) Vice-President for Equality and Citizenship, Síona Cahill, made a similar point: “We will not stop until we have changed Ireland and changed it utterly.”

The Director of Amnesty International, Colm O’Gorman, speaking to The University Times, said: “We’ve known that we are having a referendum for months, but on International Women’s Day to have the wording of that referendum confirmed, for the Supreme Court to issue to have been resolved yesterday, it’s a big moment, so where else would people be?”

The repeal movement has, over the last few years, galvanised support across the world. Today, students and young people wore the now-famous “repeal” jumpers, chanting slogans that have become increasingly familiar as repeal has moved to the mainstream. 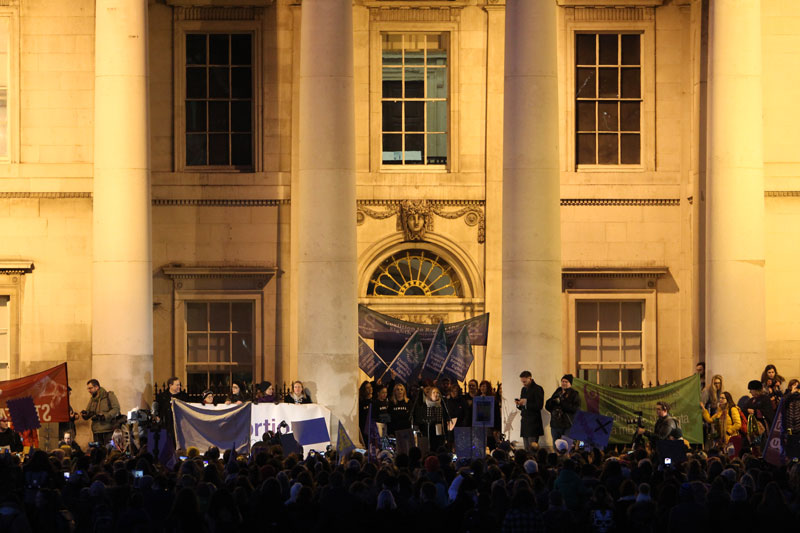 The crowd gathered outside the Custom House.

With the wording of the referendum due to be decided in the coming days, this evening’s march was a show of strength. And if the student presence in Trinity today was a little underwhelming, the numbers of marchers swelled as the rally took to the streets.

Students have been at the forefront of the move to repeal the eighth amendment. Speaking to The University Times, Trinity’s Prof Ivana Bacik, who herself was threatened with prison for her campaign for abortion rights, praised yesterday’s Supreme Court judgement – which clears the way for a repeal referendum – as “terrific”.

Over the years, a new generation of activists have cropped up and made repeal the key issue in Ireland. Cosgrave told The University Times: “It’s such a monumental day. It’s so clear Ireland is ready to change”.