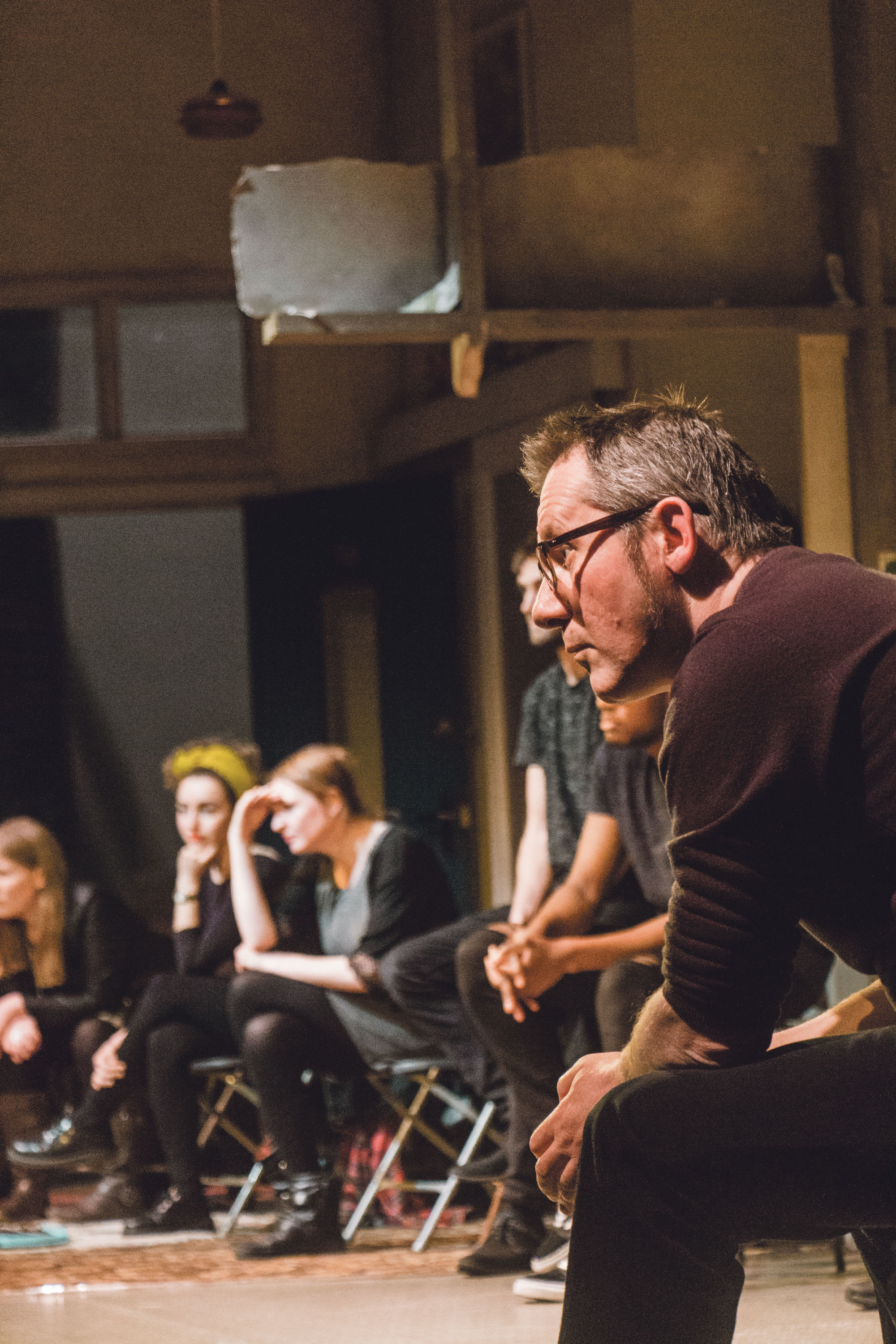 A Drama Project and Direct Provision

On the stage of the Abbey, a group of young asylum seekers got a chance to tell their story.

On a frosty afternoon in early February, I walk into the prefab that serves as the Learning Centre in the Mosney direct provision centre to observe a group drama session in full swing. A circle of bright yellow chairs brings the only pop of colour to an otherwise dreary room. I sit on the sidelines, observing and listening to the stories being told to Aron Hegarty, actor and storyteller with Candlelit Tales, by a group of seven refugee teens.

These stories would eventually make their way onto the stage of Dublin’s Abbey Theatre for a one-off performance.

The idea was conceived as a collaborative drama showcase starring Mosney’s young residents, entitled Here, There, & Now. Director and facilitator Ailish Leavy also volunteered her services to stage and direct the production, with funding received from an anonymous benefactor. The concept is to engage with cultural exchange, blending storytelling with music and dance interludes that invoke various folk cultures.

The performance is far from typical. All the kids involved are asylum seekers, trapped in a direct provision system that is routinely criticised for its treatment of refugees. But, over five weekend workshops and with no previous acting experience, they’ll devise a powerful performance as important for Ireland as any state of the nation play.

They are taking it seriously too – as Hegarty noted in early rehearsals, they have a determined “this has to be really good” attitude from day one.

Both observing the workshop and talking to Hegarty afterwards about the project, I get the sense that the process is unplanned, organic and nerve wracking. Though it seems daunting to the young people involved, Hegarty has a more self-assured attitude. “Everybody tells stories – we’re all storytellers lads. It’s not that serious”, he says. To these young Mosney residents, it’s an opportunity to perform in a serious capacity in one of Dublin’s most high-profile theatres.

He volunteered to work with this group of young people to devise a one-off performance, originally to be held in Dublin’s Peacock Theatre on March 26th. I was invited to observe the cultural activities in Mosney by Siobhra Quinlan, a Trinity graduate and founder of the Mosney Creative Arts Group.

Hegarty is planning on making sure their single performance has a broader impact. He and Quinlan were already beginning to talk about the possibility of including music in early February when I visited, and one young actor offered his own African drums to be used to heighten the storytelling. The centrepiece of the show was set to be the Irish folktale about the goddess Cesair, which would be told by the company collaboratively, while individual stories were to be weaved through the show.

The group initially consisted of three African boys hailing from Nigeria, Malawi and Zimbabwe, and four girls, all from Albania, but by the time of the production it had grown to nine members (four boys and five girls), who named the group Ninth Star Youth Theatre. This title came directly from the play’s plot, as Cesair and her companions followed the ninth star in the sky to the Emerald Isle.

In the early session I observed, the teenagers engaged in circle time, telling stories from their home countries – folk stories, fairy tales, tragedies and real-life stories inspired by friends, family and personal experience. Some are heart wrenching, some are humorous. A story from Zimbabwe tells of a one-eyed mother who mutilates her son, taking out one of his eyes so he may be like her. This story, full of pain and resentment, ties into themes of longing and belonging that pepper much of the group’s discourse. A funnier story, told by one of the girls, describes the apprehension and pressure felt in school during mock exam season, and how cheating on tests can be a barrel of laughs. The stories are raw – as Hegarty notes “we’re not on script” – and the pressure of telling a story to the group is felt. Nerves come out, in the words of one of the participants, as “voice tremors”. 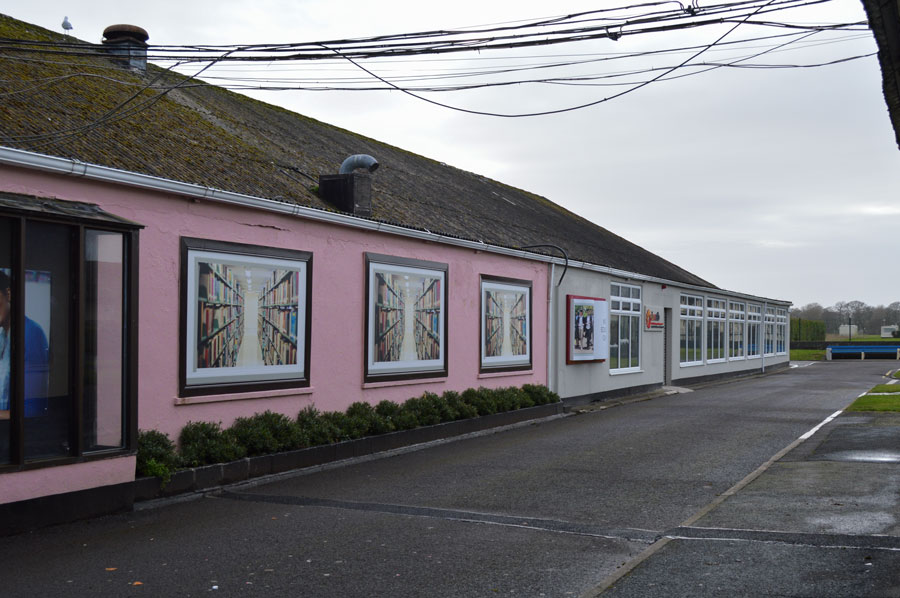 The direct provision centre in Mosney.
Shauna Donnelly for The University Times

In devising the production, Leavy and Hegarty wanted to convey the real concerns and experiences of young refugees. At every turn of the story, the message is an important one: we’re all human. Together, storytelling and drama combine to transcend language and nationality, adding new voices to Ireland’s famed gift for yarns and tales.

Flash forward six weeks to the day the curtain comes up – a Monday afternoon in late March. A diverse crowd fills the lobby of the Abbey Theatre, waiting to fill the auditorium before the performance starts. Among the crowd are a large group of the company’s young peers from Mosney, donning their baby pink Youth Club hoodies with pride, with the words “Foróige Mosney” splayed across their backs. They clutch paper bags of sweets, crisps and fizzy drinks, excited to be enjoying a trip to the theatre. They mingle with artists and musicians involved in the Mosney Creative Arts project who have come to support the group, along with various family and friends of the performers and interested members of the public. Irish teens have also come to see their peers perform – many of Mosney’s teens have begun attending secondary schools and their friends are here to support them.

The production had been moved from the smaller Peacock stage to the main Abbey stage and Hegarty is plainly excited. Yet the biggest question is why the Cesair myth appealed to him in the first place? “One of the greatest intrigues in Irish myth is that we don’t have a creation myth. Our cultural narrative, I suppose, is that people came from everywhere else. Every other culture seems to have a ‘how man was born’, ‘how the Gods made man’. Ireland doesn’t have that. Gods themselves came to Ireland for years. That’s where our sense of hospitality and generosity mostly comes from.”

Yet the power of the performance doesn’t come from words or music alone. It comes from the teenagers themselves, at home on Ireland’s greatest stage, turning their own experiences into the purest form of drama.

That doesn’t mean, though, that it didn’t take some work to get there. “They were all too shy, they hadn’t really done their homework, like you know they didn’t, they’re teenagers.”

But through talking to them, hearing stories large and small, Hegarty noticed how the teens are integrating themselves into their new home in Ireland: “Some of them have been in this direct provision centre for years, one of the lads since he was four, and he’s as Nigerian as they come, but he’s as Irish as they come as well. It’s a mad mix when you see it and hear it. Their accents are all over the place. Telling you about their day to day life, their animations, their characters, they’re so Irish as well. It’s breathtaking in those moments.”

Every other culture seems to have a ‘how man was born’, ‘how the Gods made man’. Ireland doesn’t have that

There was chaos too. Like teenagers do, they showed up late or not at all. Snow threatened to disrupt the whole show, even while performance day came closer and closer. Yet as I enter the Abbey for the performance, there’s little sense of a chaotic birth.

With that, the company take to the stage, opening with an intense drumming circle on African percussion alongside a cajon, a box-shaped drum originally from Peru. Libyan singer-songwriter Farah Elle, who is heavily involved in Mosney’s Creative Arts, served as musical director alongside Ru O’Sé, and fiddle and guitar accompaniment were provided by Audrey Trainor and Oisín Ryan. Hegarty and the oldest of the teens, Noheem, serve as narrators. Noheem doubles as Assistant Director to Leavy and has a strong stage presence from the second he appears.

They opened with the show’s premise, telling the central story of Cesair as taken from the Irish historical book of invasions. Cesair is said to be the “granddaughter of Noah”, the “leader who was a woman”, and in this incarnation of her tale she built three arks to take “three times fifty women and three men” on a seven-year journey that ends with settlement in Ireland.

She came from Sudan “to seek refuge from the great flood”, the audience is told.

The stories I heard in the initial workshop in February are transformed, and three stories are weaved into the central tale. The costuming is basic – the nine teens don grey tees, black bottoms and runners, and make use of handkerchiefs, colourful scarves in vibrant prints and homemade cardboard crowns for variations in dress from scene to scene. Dance and music were seamlessly incorporated into the tale, as an Albanian folk dance and a lullaby from Zimbabwe reflected the heritage of each story.

The three subplots derive from stories from Zimbabwe, Nigeria and Albania, taking in a range of narratives from the humourous usurpation of an African monarch, to a tale of an absent mother who was domestically abused, to a tale of castle building and sacrificial murder. Despite the seriousness of these themes, the teens manage to tell the stories beautifully and often hilariously, and the culmination of the plot comes with Cesair’s arrival on Irish shores.

We weren’t really good at drama, we just started and now we’re here

Of the three men on the voyage, only one survives, and he chooses to turn himself into a fish and become reincarnated as various animals. Today, we’re told, he might still watch us come and go, acting as something of a guardian for our shores.

Kingston followed the performance with a Q&A session, leading the discussion and allowing the audience to ask the teens about a diverse range of subjects. They talked about how important the Abbey has been to them. Aside from performing on its stage, the group visited the theatre to see a production of Jimmy’s Hall courtesy of Kingston last year, and it clearly had a lasting impact as some of the actors and musicians came to visit the group in Mosney later for a workshop.

The teens seemed awestruck by the opportunity. One teenager, Noheem in particular, seemed particularly touched by the whole thing. “We weren’t really good at drama, we just started and now we’re here.”

When asked what their favourite part of the performance was, they quipped “you all laughed when you were supposed to laugh”, and the toughest part was “definitely the dancing”. Leavy was visibly overwhelmed with pride when discussing the group’s success, saying she “learned how much work can be done in a short space of time” by motivating the teens.

I asked the group what they gained from the experience, and Noheem passionately said he would tell anyone to do it and “put two feet into it”. He claimed he “used to be indoorsy” and “wasn’t into drama”. Now, that’s all changed.

Telling stories, as much we as often try and kid ourselves into believing, isn’t a uniquely Irish gift. Every country has stories about itself – some sad, some true, some that capture a way of seeing the world. But each one is about home and a sense of belonging. On stage in the Abbey, a small group of teenagers from around the world reminded us of what home means.