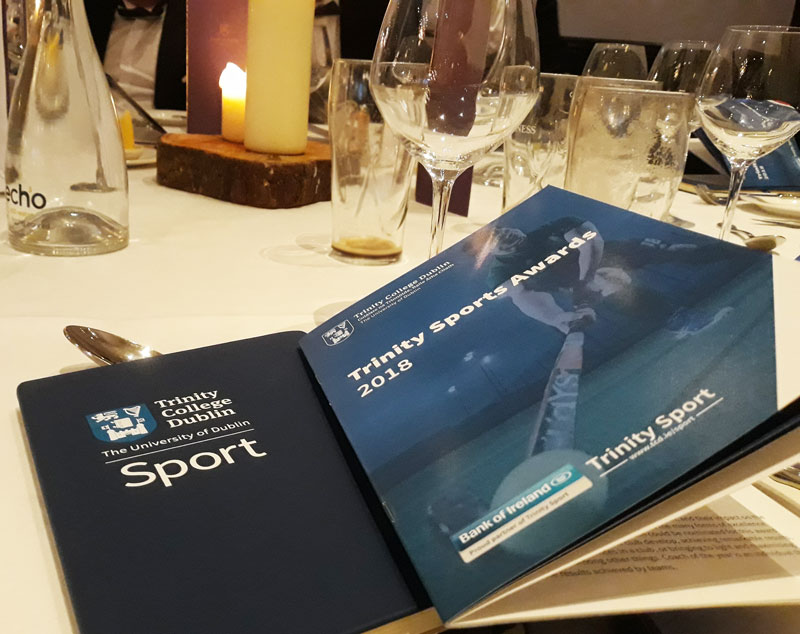 They say one should throw the best party to celebrate success and Clontarf Castle did indeed play host to a great celebration of all of Trinity’s’ sporting achievements of the past year.

With Trinity Hurling leading the way with five nominations, followed closely by DUFC with three nominations and Dublin University Fencing (DU Fencing) gaining two nominations, it was set to be a night to remember for all athletes and coaches present.

The night kicked off with sports journalist Evanne Ní Chuilinn welcoming the two guest speakers to the stage, Robbie Henshaw and Rob Kearney, for a question and answers session. Laughter filled the room as the two international rugby players joked with each other and reminded the young athletes in the room to keep pursuing their sporting dreams and to “have the craic” with friends they would make for life.

Dinner then ensued, with chatter turning to who’d win each award. Once the meal finished Ní Chuilinn called for attention to announce a new initiative to be undertaken by Trinity Sport, with two ambassadors announced to enhance the profile of Trinity Sport. Ailis Egan and Sinéad Lynch took to the stage to receive their honorary blazers as a token of appreciation.

The presentation of the Pinks awards was then made by Chairman of Dublin University Central Athletic Club Donagh McDonagh and Head of Trinity Sport Michelle Tanner, highlighting key successes of each awardee. Four members of DUFC were awarded Pinks, with two representatives from DU Fencing, Dublin University Ladies Boat Club (DULBC) and the Dublin University Harriers (DU Harriers), with the remaining eight recipients coming from various different sports and clubs such as camogie, trampolining and Dublin University Rifle Club.

The awards then got underway, with Leon Breen claiming the Social Media Campaign award on behalf of Trinity Hurling. Tanner then presented Neasa Corkery with her Sports Member of the Year Award, with cricketer Sorcha O’Carolan Murphy following as the worthy winner of Club Administrator of the Year.

Trinity’s hurlers’ second award was earned when senior hurling manager Shane O’ Brien was gifted with the glass trophy for all the success seen during his time as manager to date. DU Rifle saw their only award come through Siobhan Scarlett, who received the Performance of the Year.

Dr Colm Flynn of DU Fencing was presented with an award for Special Contribution to Sport, a touching gesture that was greeted with large applause from the audience.

Tensions rose as the room waited on the final two awards. DUBC claimed the title of Team of the Year after the success of the Senior 8 Team in recent weeks, particularly in the Trinity Regatta in Islandbridge. But the most anticipated award of the night, Sportsperson of the Year, was a category full of really deserving nominees. In the end, Michael Silvester took home the title after an outstanding season with both DUFC and the national team, marking the end of a night that highlighted the success of Trinity’s athletes and teams.