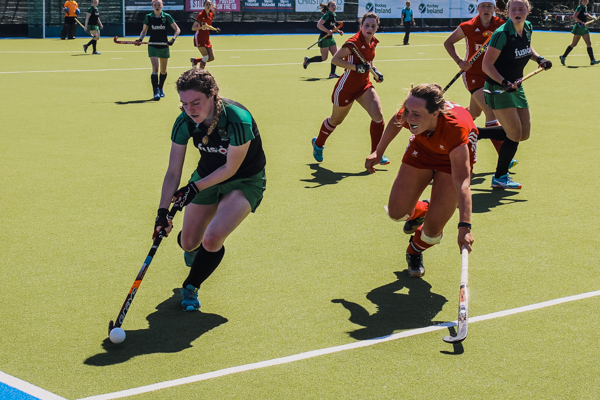 Jake O'Donnell for The University Times

A year after overcoming the same opponents to achieve promotion to Irish hockey’s top league, Dublin University Ladies Hockey Club (DULHC) were defeated by the Leinster Division 1 Old Alexandra team who had been flirting with promotion in recent seasons.

Trinity started the first quarter of the game with the confidence they have seemingly lacked during heavy defeats in the league across recent weeks.

But while the opening stages were predominantly acted out in Alex’s half, it was Trinity whose keeper was first tested. After a surging attack down the right wing, Alex’s Silvia O’Mahoney found herself unmarked at the far post, a clear goal prevented only by a spectacular front sliding save by Carolyn Crampton in Trinity’s goal. Crampton was unable to replicate such heroics for her side two minutes later as, with 10 seconds remaining in the quarter, DULHC were robbed of possession in a dangerous area, allowing Alex’s right forward to drive the base line and convert the game’s first score through a jungle of Trinity legs.

After the suckerpunch of conceding at the very death of the first quarter, Trinity started the second quarter brightly, much as they had the first.

Dribbling in Alex’s D, Jenny Long successfully lured a foul from behind her and won Trinity their first penalty corner of the game. Within a minute her sister Ailish had won another, with Niamh Sweeney’s resulting shot at goal prevented by the opposing keeper. The pressure was kept on as Sally Campbell was unleashed by a pass in behind her marker, but her reverse shot, at the end of a charge into the box, edged the wrong side of the Alex far post.

Alex, however, began to come into their own, as the heat of the afternoon sun began to take a toll on Trinity’s incessant pressing. Two green cards saw Alex players consecutively serve time in the sin bin for cynical fouls. It was in between the two cards, though, when Alex still had their whole team on the pitch, that Sweeney levelled the scores for DULHC. A pass by Louise McCollum sent Ailish Long down the wing, taking control of the ball and laying it off to Sweeney in the D who lifted it over the diving Alex goalkeeper. The fightback lasted all of three minutes. Alex’s Sophie Roopnarinesingh, who had been causing problems for Trinity throughout the afternoon, found herself unmarked and able to push the ball in from a short distance. The goal handed the lead back to her side, to much joy from the audible Alex support.

The fourth quarter grew increasingly tetchy as consecutive umpire decisions drew the ire of Trinity’s field and bench. The growing tension and frustration was as much down to DULHC’s consciousness of the quickly dying time of the scoreboard than any unjust decisions. With four minutes remaining, Trinity took off Crampton, gambling in order to give themselves an extra outfield player.

The Long sisters, along with Sally Campbell, did their best to work the ball into the D from the wings but Alex were comfortable in consistently drawing fouls or foots from DULHC’s attacks. With every foul Trinity committed, Alex made understandable efforts to murder the remaining time by slowly restarting the game.

Watching the scoreboard, the crowd began a 10-second countdown while Alex stood over a free. By the time the ball was hit, the countdown had concluded and Alex and their supporters were jumping into each other’s arms while DULHC collectively sank, defeated, having given their all in a physically demanding game.

Achieving just two wins and four draws across the league season, Trinity will now return to provincial hockey, a league they won with considerable ease just 12 months ago.