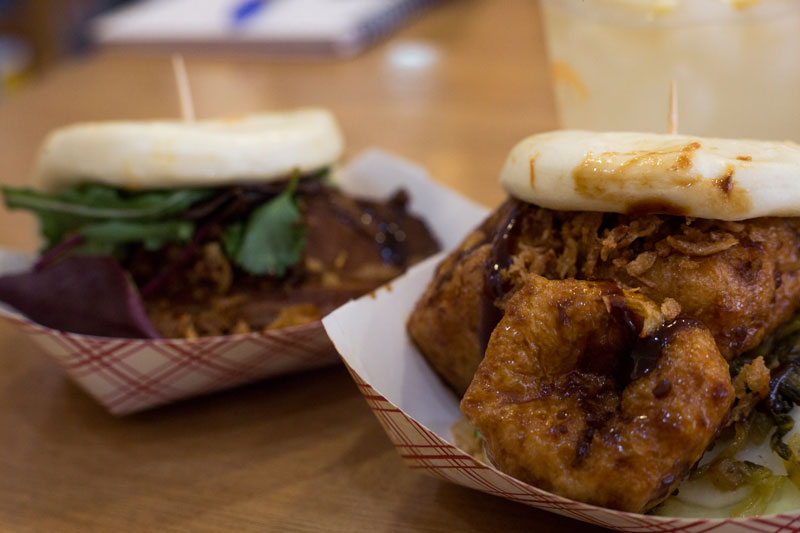 Walking into the newly-opened Bao House on Aungier St on the hottest day of the year, I am hit by a warm, fragrant gust of air and the musical clang of a hot wok, and instantly have qualms about my lunchtime choice of steaming hot gua bao.

A “bao” or a “baozi” can be roughly translated as bun, and consists of fluffy white steamed dough encasing some sort of filling, which varies hugely depending on the region in China and many other parts of Asia. A “gua bao” is unlike other baos – rather than enclosing the filling, a circle of dough is pinched around it like a soft taco.

Originating in Fujian, China, but hugely popular in Taiwan, gua bao is a delicious street food snack, and Bao House, is the first restaurant in Dublin to specialise in Taiwanese food, let alone gua bao specifically.

Waiting for a friend, I order a homemade lemonade, which is icy and delicious, and take a moment to process the interesting decor: namely, the fantastic communist propaganda wallpaper. While communist Chinese illustrations initially seem a little out of place in a Taiwanese restaurant, a hyperbolic Chairman Mao quote describing the sun setting among rice fields while cooking smoke rises (roughly translated as I’m sure you can tell), encapsulates the no-frills, food-focused vibe of the cosy space.

Resisting the delicious looking Taiwanese noodles and rice bowls, we decide to stick to the eponymous gua baos, and order The Classic (braised pork belly), The Temple (braised tofu) and The Zest (crispy duck) to share. Remember to ask for the unadvertised 10 per cent student discount and the rather filling buns will cost you between €5.20 and €6.20.

The Classic, the most traditional gua bao, arrives promptly, and the light and airy dough is filled with the thick slices of tender pork belly of my (arguably niche) dreams. They’ve achieved the perfect ratio of caramelised fat and tender meat, and the fresh coriander, pickled vegetables and fried shallots make for a delicious and authentic treat.

The key ingredient of The Temple, the vegetarian option, is the three large cubes of flavourful braised tofu, which are firm and have a great bite, and the filling is paired with all the same ingredients as the pork version, as well as some pickled white turnip.

In the end, however, we both agree that the gua bao filled with crispy aromatic duck, marinated in hoisin and topped with spring onions and peanuts, is the best of three. Crispy aromatic duck is in fact a London Chinatown variation on the more traditional Beijing version, and the crispy seared skin works beautifully in contrast with the soft bun.

Bao House doesn’t feel nearly as slick as some of the other new restaurants popping up, but that only adds to its charm, and probably the quality of the food. It’s currently cash-only, so save yourself the awkward run to the nearby Tesco I experienced, and come prepared to enjoy some authentic Taiwanese street food.