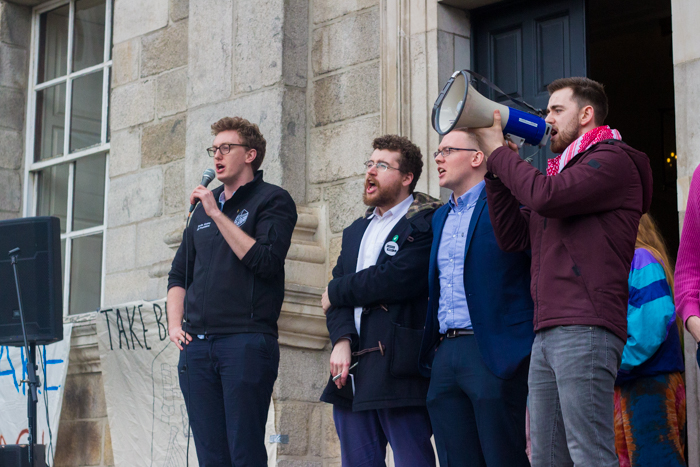 Trinity’s students’ unions have called an apparent five per cent increase in fees for hundreds of international students “a complete betrayal”. The move, they say, reneges on the Take Back Trinity-brokered fee certainty agreement.

The E3 learning foundry is a new institute being built near the Hamilton, where students will come together to study natural sciences, engineering and computer science. The institute recently received Ireland’s largest-ever private philanthropic donation.

In a statement, released on social media, TCDSU President Shane De Rís and GSU President Oisin Vince Coulter said: “College is now contending that this agreement, entered into by students with the college, does not apply to international students studying in the E3 Learning Foundry (natural sciences, engineering, and computer sciences, among others), Medicine, and Dentistry. These students have now seen their fees unexpectedly rise by 5%.“

“The move by college to introduce these charges without any notice to the students is undertaken in bad faith and neither the SU or the GSU will accept it”, the presidents said.

In the statement, the presidents said that the agreement to fee certainty “was explicit in ensuring that no continuing students would be subject to the 5% fee increase proposed by Finance Committee during the year”.

“This agreement was approved by the Board of College who agreed that there would be no fee increases for any continuing students in the 18/19 academic year”, they said.

The College has not yet commented publicly on these apparent fee increases, and did not respond to a request for comment from The University Times.

De Rís and Coulter will meet with College officials on Monday to clarify why these students are facing increases. The College Bursar, Veronica Campbell and a representative from the Financial Services Division will meet with the union presidents. Campbell will stand in for Provost Patrick Prendergast, who is currently on annual leave.

This year, College proposed a five per cent increase in fees for postgraduate students and non-EU students. After widespread student protests, led by the Take Back Trinity movement, College agreed to fee certainty – a system whereby international and postgraduate students would know what they would have to pay each year upon entering Trinity.

While a five per cent increase would apply for incoming first year non-EU students – with any increases thereafter capped at three per cent per year – it was agreed that continuing students would not face fee rises.

Speaking to The University Times yesterday, TCDSU President Shane De Rís said that he hoped “to get clarity and to reaffirm the position that TCDSU and the GSU are strongly against the charges as it’s not what we agreed to in good faith with the College after Take Back Trinity”.

International Students Against Fees said that the students reporting increases on their portals were primarily science students. They said that if the increase was to be implemented, “it is a breach of the Fee Certainty agreement reached after much organizing and hard work this past Spring”. The page called on international students to send in screenshots of the amount billed on their online accounts.

In a press statement, the President of the Union of Students in Ireland (USI) Síona Cahill condemned the move: “It appears that TCD attempted to quietly announce a 5% fee increase for students in Science, Dentistry, and Medicine – already very lucrative courses for the college. This move by TCD is totally disrespectful of their own students, demonstrating a complete lack of compassion or regard for the wellbeing of the people who come to learn in their institution.“

Take Back Trinity was a grassroots movement that emerged in March and garnered national attention for protests against supplemental exam fees, modular billing and the unpredictable jumps in fees for international and postgraduate students. The group occupied the Dining Hall for three days and drew huge crowds in Front Square for rousing speeches from activists and politicians alike. They also occupied the Book of Kells exhibition and Front Gate, targeting tourism in Trinity.